I’ll admit, a keyboard is one of those things I hate to buy. Yet, when the nasty collection of crumbs build up and letters start to fade, I know it’s finally time to pull the pin. Despite being disgusted with myself and the state of my keyboard, buying a new high-end keyboard has never been a priority for me. I always settle for a cheap plastic sucker that never seems to last for more than a few years. So when the opportunity came along to review Logitech’s new wireless gaming keyboard, I pounced and I am glad I did. The Logitech G613 Wireless Gaming Keyboard easily surpassed my expectations and is one of the better keyboards I’ve ever owned.

At first glance, Logitech G613 which retails for around $150usd (currently $135usd on Amazon) looks like any other standard keyboard. Similar to the Logitech mouse I just reviewed, there is nothing fancy about the keyboard. It is certainly larger than most of my previous keyboards with its built-in wrist rest, mechanical keys and slick media controls. In fact, the wrist rest is quite large and takes some getting used to. Also, the extra row of macro keys, which I did not need at all, seemed to throw me off. There is also no backlighting. For the price, a backlight option would have been nice but in order for this keyboard to cut the cord and keep the cost reasonable, some of the extras had to go. That being said, there are well-placed media buttons. A feature I definitely liked. 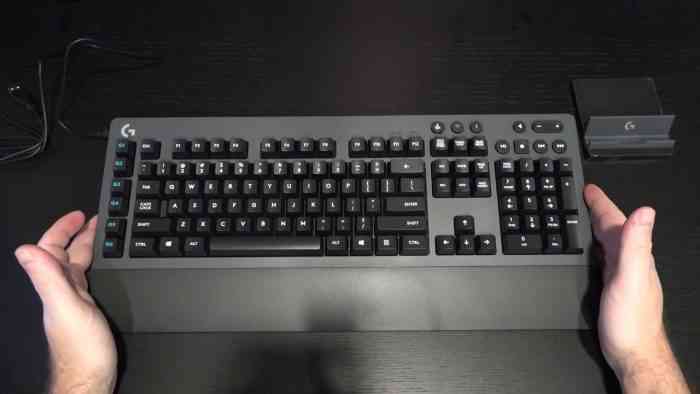 Another glaring omission is its inability to go wired. At the same time, having a wireless keyboard is truly wonderful. There is no denying that but it would have been nice to have that ability to plug in so I can avoid a situation like having to replace batteries while playing online. That being said, this really shouldn’t be an issue for a long time. Using only 2 AA batteries, G613 can be used for up to 18 months. Also, when the battery is at 15%, both the LED status indicator light on the keyboard and Logitech Gaming Software notifications will warn you before the critical moment hits. So if your keyboard runs out of battery mid-match, it’s your fault.

The wireless capabilities of this keyboard work remarkably well. Being able to re-position the keyboard without wrestling with a USB cord is something I never thought I would appreciate as much as I do now. Range-wise, I had no concerns and not once did I experience any connectivity issues.

The Logitech G613 connects via a wireless dongle or Bluetooth. You can actually have both connected at the same time. The Bluetooth connectivity allows you to connect to multiple devices which is pretty cool. Type away on your desktop or connect your keyboard to your phone. The keyboard also includes a handy little tablet or phone stand which, I’ll admit seems odd it was included. Nevertheless, I liked having the stand as it made typing on my phone seamless. Again, this feature worked well. I tweeted, sent emails and punched in messages on WhatsApp with my keyboard and experienced no issues at all. It was pretty cool. 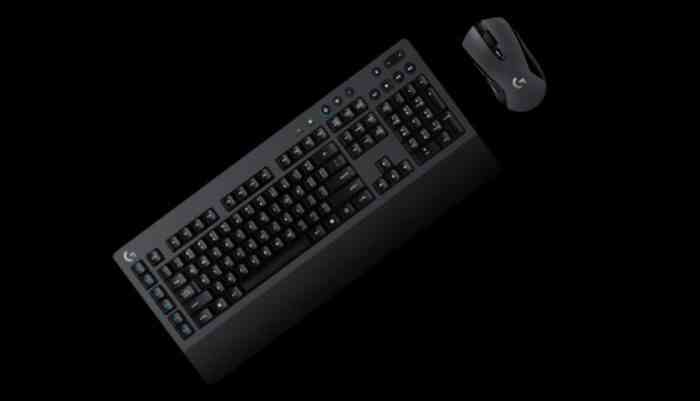 So how does the keyboard feel? Quite nice actually. The G613 uses Logitech’s proprietary Romer-G mechanical switches which makes for a keyboard that is quiet, accurate and just has a nice feel. Even my wife commented how great the keys felt. The keyboard is durable as well with a 70M click-life. Competitive gamers will enjoy the quickness of the keys as well, as the Romer-G switches have a short-throw actuation at 1.5 mm.

Performance wise, I experienced no glaring issues. The solid wireless connectivity and combined with the fabulous key switches the G613 is about as good as it gets when it comes to performance. I noticed no input lag and never felt like I was at any kind of disadvantage playing wirelessly.

“…the G613 is about as good as it gets when it comes to performance.”

I should mention, before you start hammering away at your keyboard you should install the Logitech Gaming Software. The software is easy to use and user-friendly. With the software, you can reprogram the extra column of G keys and set up unique profiles for each game you play. If you are one that requires different macros for different games this software will be a lifesaver.

The Logitech G613 isn’t the best keyboard on the market or even the best keyboard the company has ever made; however, for the price point, the G613 is as good as it gets. Its wireless capabilities work as advertised and the mechanical keyboard itself is quiet and performs better than most on the market. If you are looking for a new keyboard, picking this up at its current (at time of writing) discounted price is a worthwhile investment.

***Keyboard was provided by Logitech for the purpose of this review***