The End Is Nigh Review – 600 Levels Of Rage and Revelry

Have your blood pressure meds handy…

At first glance, The End is Nigh is a strange game. The star is a little glob named Ash that’s barely visible on some screens, hundreds of stages must be conquered to win, and collectible “tumors” can be used to unlock bonus levels. Like I said, strange game. However, those oddities are merely window dressing to what is actually a fun and addicting experience, the “just one more stage” sort of game that can keep me going for hours on end. I didn’t know what to expect when I dove in, but The End is Nigh is a strange yet fun jaunt.

Right from the opening cutscene — which includes a few choice words I thought I’d never hear on a Nintendo console —  The End is Nigh pulled me right into its bleak, post-apocalyptic world. Despite my screen being filled with brown, black, and grey I was enthralled by the world, the bleakness forming a kind of beautiful destruction. I felt this way throughout all of the 12 worlds, the game’s art style never coming off as bland or ugly. Considering this is a post-apocalyptic world, that’s quite a feat.

As this is a platforming game I would hope the platforming mechanics are sound, and I’m happy to report this is the case. Every time I died — and believe me, I died a lot — it felt justified. I never felt like the game took cheap shots at me, and I never considered any level “unbeatable” even when I died after the 30th try. The jumping mechanics are crisp, the physics of the game are sound, and getting through obstacles takes little more than patience and a little trial and error. Infinite lives encourage experimentation, as dying merely resets the levels so risk is minimum.

“I didn’t know what to expect when I dove in, but The End is Nigh is a strange yet fun jaunt“

Don’t take that minimum risk as a sign of an easy game, however; The End is Nigh is straight up hard. Some levels require precision jumping, making use of the force-sensitive jumping mechanic that confused me at first but eventually clicked in a big way. Some levels I was able to conquer in one pass, others (especially when I pursued the collectible Tumors) took dozens of tries. Sometimes a tumor will not appear until I reach a certain point in a level, forcing me to backtrack as I run through and increasing the difficulty that much more. This game takes no prisoners, and I would expect nothing less from the minds behind Super Meat Boy.

The only issue I have with The End is Nigh’s platforming is the sections involving hanging onto the side of a platform, be it on a cliff edge or a designated hook. Attaching Ash the blob to the corners or hooks can be extremely touchy at times, costing me more than a few lives in the process. Just when I think I’ve lined the jump up properly Ash falls to his death among the spikes. These trials were the ones that gave me the most heartburn, as consistent deaths due to something technical like edge mechanics can be maddening after a while, Completing these stages felt that much sweeter though, so perhaps this all evens out. 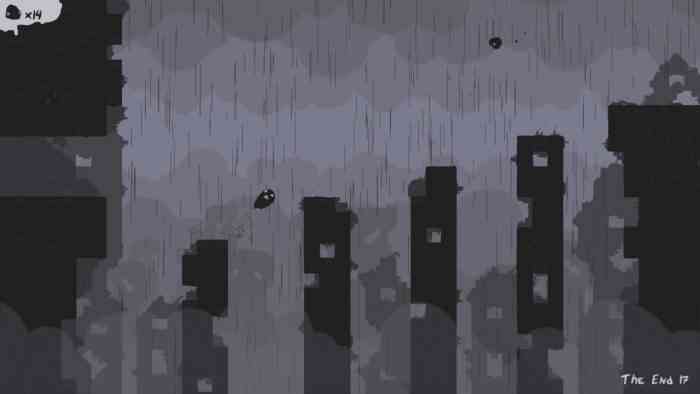 The extra minigames are a fun addition, unlocked by collecting video game cartridges strewn throughout the world. These are retro-themed worlds that play just like the other stages, only with chiptunes blaring and blocky NES-style graphics. The names of these minigames, “Denial,” “Bargaining,” etc. are named after the Kubler-Ross Stages of Grief, a nice touch and also feelings I may have experienced during my playthrough due to the difficulty. Collectibles in games sometimes offer meaningless rewards, but I would argue that these cartridge worlds offer enough challenge that they should be collected.

I don’t know what’s going on in Edmund McMillan’s head, but I feel like every game he puts out leaves me in some strange “what the hell did I just play” mentality. That’s not necessarily a bad thing though, and The End is Nigh proves how fun that weirdness can be. The hundreds of stages provide a ton of devilishly difficult yet delightful gameplay, the setting is interesting enough to keep me going through the gauntlet, and that signature McMillan aesthetic runs all throughout the adventure. There’s a lot to like in The End is Nigh, just try not to throw the Switch around when the game gets super tough. Someone could get hurt. 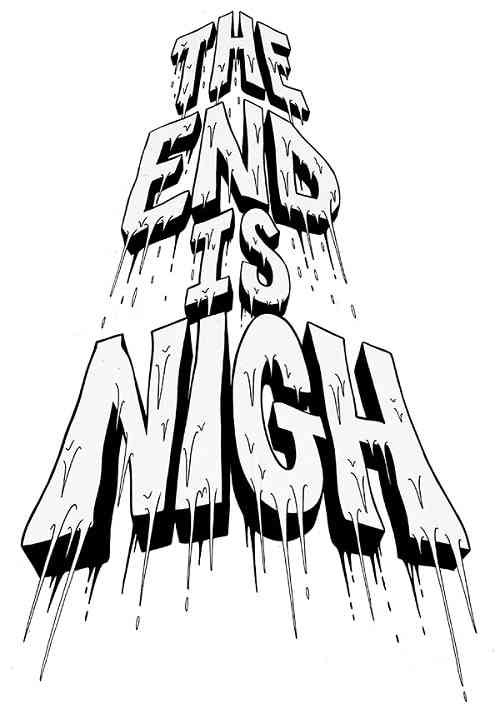