LEGO Star Wars: The Force Awakens is a shining example of how to treat a license. While the series has a decorated past, it has never been so good as playing through the tale of Episode VII alongside a fun cast of characters whilst reliving the moments of the film in LEGO form. The game’s prologue starts slow and sloppy as its changing objectives make it seem more like an assortment of mini-games than a cohesive level, but the rest of the experience is consistently strong with exciting moments in almost every mission.

For those who have seen the JJ Abrams directed film (and those who have will get an infinitely better experience), the game delivers every scene and potential gameplay segment the way you think it will. I spent my playthrough quietly challenging the developers and virtually every single scenario was crafted to perfection inside of the LEGO games’ architecture. Without going into spoilers for those who haven’t experienced the story, thinking back on the film and when a video game version of that should give the player control, or how a scene in the film could be converted into a gameplay section is nailed to a tee. At a certain point, I not only raised my expectation for what was left but instead allowed myself to sit back and expect to be given a phenomenal experience like I did when watching the film. There isn’t enough that can be said for developer TT Games’ work on converting the film logically and masterfully into a game.

“LEGO Star Wars: The Force Awakens is a shining example of how to treat a license.”

The art, attention to detail, musical score, and sound effects all make for an authentic Star Wars experience. It can only be compared to DICE’s work on Battlefront and their uber focus on making every aspect of Battlefront be authentically Star Wars. The wonderfully recreated castle of Maz Kanata, the catacombs of the Millennium Falcon, and the arid badlands of Jakku were immediately recognizable and stunningly accurate as the game uses the full potential of its license. Had I entered ‘generic spaceship 5’, I would have just headed towards the objective marker, but that isn’t the case when you are inside the bellows of the Millennium Falcon as it teases you with hallways and secret paths away from your main marker. It was cool to explore its block shaped insides and this is one of the many ways TT Games cleverly used its license to evolve what would have otherwise been a mundane task. And while a good chunk of LEGO’s positives can be attributed to the film it bases the game around, nothing can be taken away from TT Games in how they executed it all. 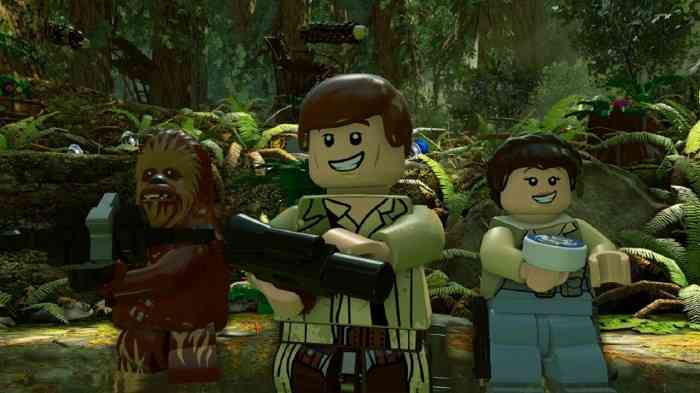 But while the game encourages you to take its visuals and environments in, the combat and puzzle solving make up the bulk of the gameplay. This time around the developer introduces a multi-build system where players have the choice to build structures needed to pass a section in whatever order they want. The problem is, there isn’t much choice at all and it’s all binary as you have to solve the puzzles in a particular order anyway. The puzzle solving is still interesting enough although it seems like it’s high time for LEGO’s puzzle aspects to be given a complete overhaul towards something more engaging. But it does get better, as progressing through the game gave me more knowledge of the mechanics and know-how concerning the puzzles. The result was an easier but more enjoyable experience as I effortlessly switched between multiple characters on-screen at times to solve puzzles which inadvertently helped with the pacing as things came and went by at a fast but manageable pace.

“LEGO Star Wars: The Force Awakens is LEGO at heart, with some changes made to the core combat and puzzle-solving nature of the games.”

While the melee and gun combat are largely similar as well, besides cover based sections where the player is tasked with popping in and out blasting Stormtroopers and the like, the vehicle sections of the game are surprisingly one of the highlights. They have a real sense of speed to them which helps with immersing the player into the fast-paced sections. It’s similar to Star Fox Zero wherein players are taken through both narrow, linear routes as well as bigger play areas where you are given full 360-degree control. The visual effects really stand out as you blast TIE fighters out of the sky and zoom past obstacles in your path. 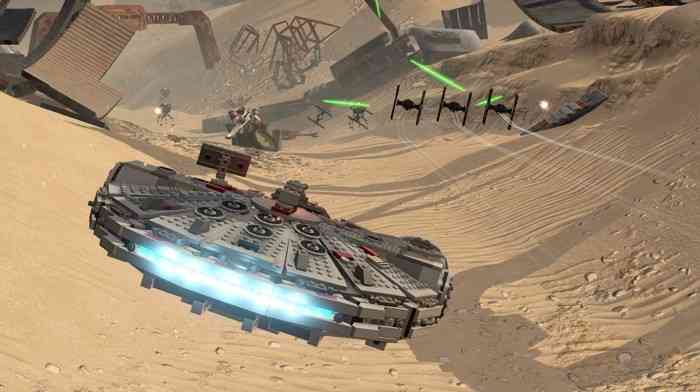 LEGO Star Wars: The Force Awakens is LEGO at heart, with some changes made to the core combat and puzzle-solving nature of the games. But in its interpretation of Episode VII and the developer’s execution on making scenes from the film fit into a video game, it far surpasses its predecessors and will define what LEGO games can be in the future. LEGO Star Wars: The Force Awakens is a blast to play through and only excites me for what comes next. Sitting back to take in the hilarious recreations of the scenes in the movie through the cut-scenes in the game got me in the mood to watch The Force Awakens again, and it is that feeling of Star Wars bliss the developers at TT Games can be proud they nailed. 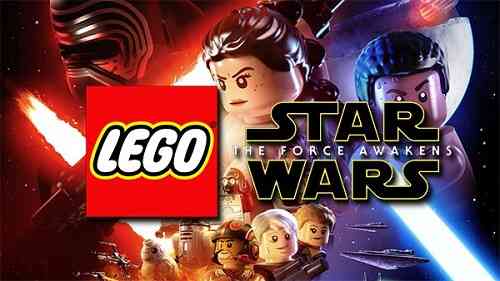