Zombies have become a staple of our gore and violence fueled multi-media obsession. Whether in video games, movies, TV shows and pretty much anything else we use to entertain ourselves, we are captivated by the idea of a plague of the undead and the horrors it brings. In most cases it involves an onslaught of unstoppable, mindless former-people closing in on a hapless and horrified hero. But once in a while we are thrown a little gem that gives us the over-the-top, Tarantino-esque violence we crave and trade in the overabundance of fear for some ridiculous and psychotic over the top heroism.

Killing Floor 2 is both developed and published by Tripwire Interactive, building off of the success of the previous title originally launched in 2009. Taking place one month after its predecessor, Killing Floor 2 sees players dealing with the aftermath of a deadly outbreak from the Bio-tech company Horzine, one that turned people into Zeds: the series version of zombie-like monsters. Players will take control of characters from a selection of oddballs and misfits with various customizable parts and be thrown to the wolves to survive waves upon waves of mutated and mangled Zeds out for blood.

“Not only do enemies seem to burst with blood, it will literally coat and stain your surroundings for the duration of the level.”

Despite the gravity of the situation, the developers have taken care to give the game the right amount of humor and pop culture references to make this less of a straight up horror experience and more like a cheesy B action movie in the best possible way. My favorite character happened to be Tom Banner, a Canadian LARPer in full knight costume. Not only does he speak in classic tongue during combat while blasting apart mutated monstrosities with automatic weapons, but his costume options are great examples of the pop culture humor Tripwire has put in, with two notable examples. Tom has the option of changing his gear to a very familiar set of black knight armor which, in game, is called the Cleese – a delightful nod to Monty Python’s iconic black knight played by John Cleese. There is also a full armor set of white and gold with a rather familiar lion on the chest: this armor set is called the Jaime, which I hardly think needs much explanation.

All of the characters are riddled with these little nods and it makes players feel a little less terrified and a little more geared up to have fun with over the top gore. This leads me to a great feature of the game: the blood. Tripwire put a lot of focus into the violence of this game, and those who appreciate the likes of Mortal Kombat will love the M.E.A.T. (Massive Evisceration and Trauma) system they developed to make it as gruesome as possible. Not only do enemies seem to burst with blood, it will literally coat and stain your surroundings for the duration of the level. The walls will be painted with the blood of your enemies, which might even be a fun objective to set for yourself and friends. 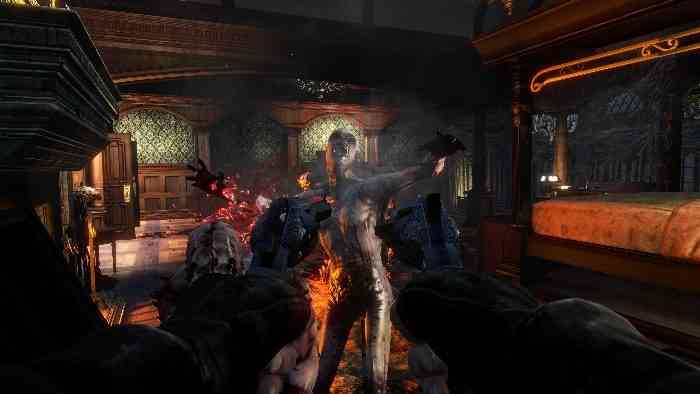 Killing Floor 2 is easily playable as a single player experience but you are encouraged to play with friends to really have some fun. Wave difficulty will scale based on the number of players (up to six at a time) and will end with a randomly generated boss to be decided by the time the last wave begins. In between waves players are given a very generous length of time to visit a shop to purchase more ammo, new guns, sell unused gear, or level up with an in-depth perk system for ability customization. It’s best to keep your ammo stocked and remember to be smart about your bullets.

Gameplay for Killing Floor 2 is fairly forgiving at the start: Zeds in the first few waves are slow and give you an opportunity to get your bearings on the level, check out staircases and the general lay of the land. Doors can be welded shut to slow them down, and of course if you have a squad of pals you can bunker down and defend your turf. Level design offers a surprising number of options with multiple floor levels and paths to take, you never really feel cornered unless you backed yourself into one. For a first person shooter the controls do seem a bit off at first but after a few waves you adjust pretty easily. For a wave survival game, Tripwire put together a fantastic experience, however I feel like replenishing ammo could have been made automatic between waves. There are still plenty of weapons and upgrades to unlock, so buying ammo feels like an unnecessary step. 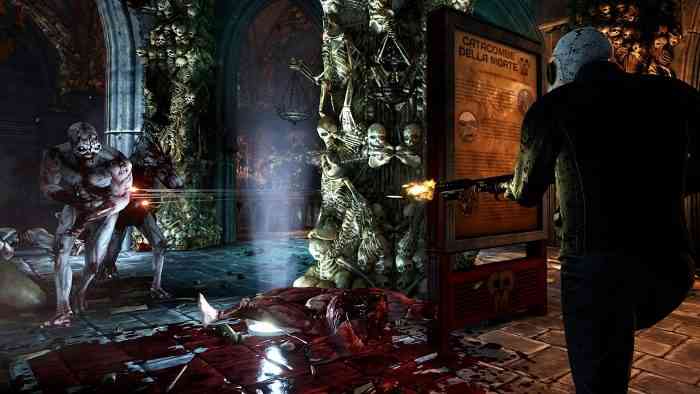 Killing Floor 2, with its straight to the point, over the top violence and easter egg loaded humor is a ton of fun to play, even for those worried about going into a scary experience. The characters are wildly varied, and fans of wave survival surely won’t be disappointed at the variety this game can offer. Best enjoyed with friends, I would have liked a little more freedom with character customization visually and I felt the need to buy bullets between waves was a waste of the excessive amount of time players are given to shop, but overall the experience should be enough to please even the most bloodlust consumed gamer around. 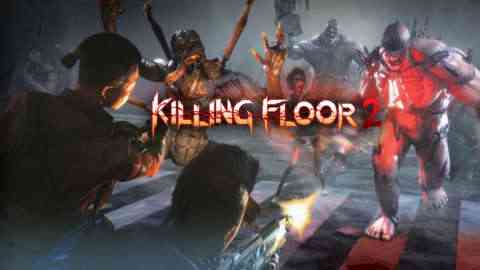