JYDGE Review – I am the Law

It seems 10tons Ltd is taking Neon Chrome as their base and turning it into new top-down shooters. While some might complain about recycled assets or mechanics, I think it’s brilliant. JYDGE is their latest creation, and while it looks a lot like Neon Chrome, it behaves very differently.

You play as a Jydge (pronounced judge, don’t ask me why they went with Jydge) which is basically a take on Judge Dredd. This is a rogue-lite where completing a level earns you up to three stars depending on sub-objectives, and everything from killing enemies to looting containers earns you currency. Spend currency on unlockable upgrades to become stronger or gain new skills, allowing you to go back and unlock more upgrades. Ah, the perfect feedback loop.

Unlocking new zones or levels requires stars, a tried and true system that works pretty well. For the most part, simply completing most objectives will allow you to progress, but later in the game, you’ll need to backtrack and complete nearly every objective available before you can continue. With Jydge, since stars are based on specific objectives and not simply a scoring system, you’re almost forced to change your play style later in the game if you want to advance. Normally this would be a pain as you’d have to reinvest whatever build you’ve created into other areas, but it works nicely here.

“All you really need to know is you are the law, and you’re on the prowl to judge some criminals.”

The story is kind of irrelevant. There are some quick news segments as you move from zone to zone cleaning up the city, but it’s mostly filler. All you really need to know is you are the law, and you’re on the prowl to judge some criminals. I would have loved some more personality in the protagonist, but unfortunately, there aren’t any quips as you gun down a criminal or save a hostage. Without any visual customization, you’re left to personalize your Jydge through your Gavel and Cyberware upgrades.

You can sink extra currency into upgrading your favorite firing mode, but most Gavel or Cyberware upgrades are relatively cheap. For instance, a final damage upgrade on a firing mode might cost 20,000 while unlocking an ability is typically less than a couple grand. When I had to go back to complete all of the stealth objectives, it cost a small amount to unlock the abilities I needed to make my build viable again. If you happen to really screw things up and feel like you can’t get anywhere, you can always grind missions for currency. 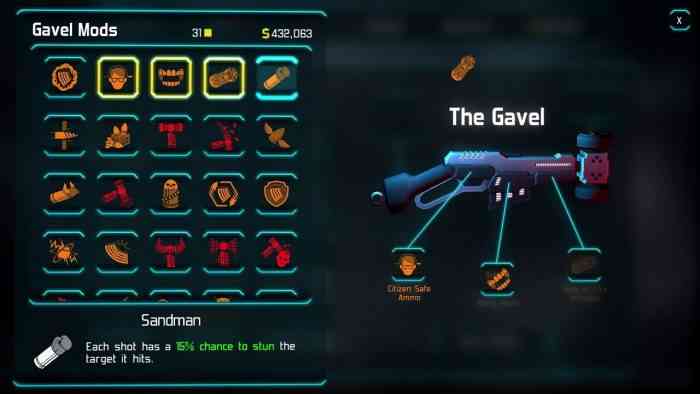 Visually, you’re getting a tweaked version of Neon Chrome. That being said, the art style works perfectly for this cyberpunk shooter. Enemies are clearly visible, more importantly, enemy projectiles are easily distinguished from your own, and chests are easy to spot as well. My only issue here was how hostages are portrayed. From afar, it’s hard to tell if they’re an enemy or civilian, but when you approach they get a ‘rescue’ prompt. You do sort of just end up memorizing which ones are which, but the first few levels before you get the non-friendly fire upgrade can be a pain.

The soundtrack is good, but a bit repetitive. There aren’t too many tracks, so repeating the same level as you struggle to reach an objective can be maddening. The music present fits perfectly, with a dark electronica vibe pumping up the tempo as you save the city. I love what’s present, I just wish there was more of it.

“If you liked Neon Chrome but wanted a more set and less random experience, Jydge is the game for you.”

Frankly, Jydge is great. Not only is it inexpensive, but it offers a lot of diversity in terms of builds or play styles. If you want to make it to the end, you’ll certainly be required to branch out and test the waters, but this only led to more fun in my experience. There are a few features you might need to get used to if coming from Hotline Miami, like automatic doors and weapon upgrades, but overall skills from any twin-stick shooter should translate nicely. If you liked Neon Chrome but wanted a more set and less random experience, Jydge is the game for you. 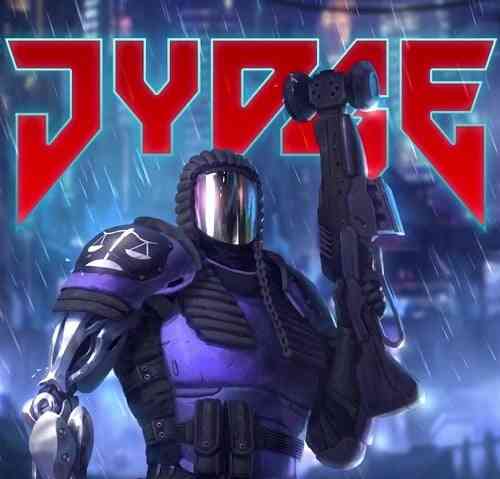 Roguelite Have A Nice Death Will Release On PC and Switch In March 2023
Next Ys VIII: Lacrimosa of DANA Review – Charming, Heartwarming & Visually Rough RPG
Previous Raw Data Review – Virtually One of the Best