Welcome to JARS, a tower defense game happening in your own home. In this mysterious hand-drawn world, you play as Victor, a quiet boy who has problems involving jars and lots of creatures in his basement.

JARS is a lovingly hand-drawn world that calls back to those kids’ movies you watched around Halloween with your family. Mechanically, though, JARS is immediately recognizable if a bit too straightforward. If you’ve played any tower defense game in the last few years, you’ll know what to do here. The main twist is that you must break jars to progress. And jars are what cause enemies to attack you or allies to defend. Now, if you add a splash of puzzle-solving, you will know what you’re getting into.

The overall goal of JARS is to vanquish foes while defending your tiny sarcophagus from harm. Glass jars with a bat symbol contain enemies or “Nasties,” while jars marked with clovers will have items or creatures that will help you defend. Items you find include glue to trap nasties and darts to take them out on your own and other fun surprises worth discovering. Unmarked jars are a roll of the dice containing a potential friend or foe, adding a bit of gambling to the mix.

The levels in JARS have a decent variety, often spicing up the simple mechanics you’ve grown used to. You can power up minions between levels to keep your edge in some of the more challenging maps. Also, you get access to unique abilities and perks to boost your Minions, like quicker attack speeds, or my favorite: the ability to see through those pesky unmarked jars. 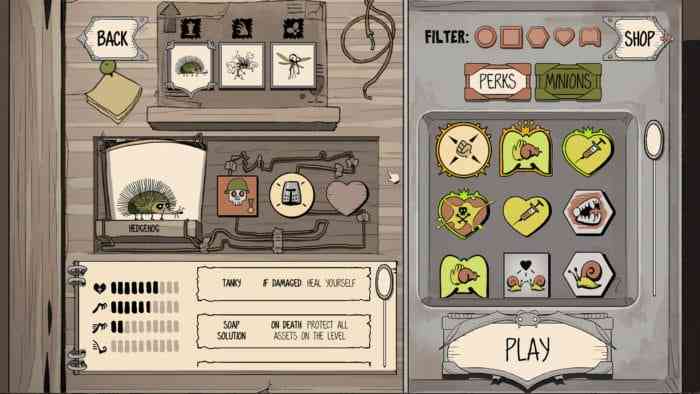 For the most part, you’re playing a tower defense game like a small puzzle that needs solving—usually figuring out the right balance of what you need to use or manipulate or exploit to conquer each new arrangement the game puts forth. Most maps are pretty quick, and you’ll be given an objective that changes throughout your journey. First, it’s just breaking jars; later on, it’s switching on lights or surviving until a timer ends. As you progress, you’ll unlock more minions to play with via a shop, and some levels will mix in specific restrictions of the types of minions you can use, so you’ll have to try out new ones and not use your same strategy throughout.

Although reasonably entertaining, there’s not much depth in JARS for tower defense enthusiasts. You won’t be theory-crafting optimal loadouts and setups if that’s your jam. I quickly found myself breezing through most levels and growing a bit weary of the lack of tension. The Tim Burton art style could only carry me so far.

Other things like Hero Mode, where you get to pilot a minion, adds some novel twists to kick around with, but overall I felt myself craving something that pushed my puzzle brain like Baba is You or challenged my defense know-how like Plants vs. Zombies. JARS is an inoffensive and fun diversion that apes the two genres without entirely surpassing them or creating something wholly new.

At its price point, you’ll be in for an okay time, especially if you find yourself enjoying the look and have an itch for a light tower defense game. It’s charming, and it doesn’t get in its own way of just letting you have at a few levels quickly. Whether or not it sticks with you will depend on how much you jive with its critters, the hand-drawn art, and Victor’s story.

Illuminaria is Lighting Up Steam With August Release