Being a “mature” gamer, I really love all the attention older titles from days gone by are getting.  There has been a fantastic movement as of late to remaster older games and bring them as close as possible to today’s video game standards. Hot on the heels of God of War, Metal Gear Solid and ICO HD remakes comes the Jak and Daxter Collection.

The whole process of remaking an older game series in HD can be a bit delicate.  If you change too little most videogame fans see very little reason to buy it, but of course going HD is quite a big change for a game to go through.  On the other hand, if a game changes too much, ardent fans may balk at it and blast developers for attempting to fix something that wasn’t broken.  It is a fine line between “dammed if you do and dammed if you don’t”.  I’m finding the really very popular titles of yesteryear have handled the best of both worlds, because they were so popular back upon initial release.  In terms of this review, while I enjoyed the Jak and Dexter series, the games were not my particular favorites.  This whole collection falls into the “too little” category given the lack of extras, but the overall quality of the original games does a lot to make up for it.

This “HD” collection consists of Jak and Daxter: The Precursor Legacy, Jak II and Jak 3.  Arguably, they were among some of the best games ever created for the PS2, and were most definitely Naughty Dog’s best pre-Uncharted work.  This fact alone makes the Jak and Daxter Collection an immense deal for anyone who hasn’t played the originals.

The games have been updated graphically for the HD generation of consoles.  Overall, they come off looking quite good.  The game’s character models are crisp and well defined, the animations are much smoother, and the textures look a lot less pixilated than we all remember them being.  I also thought the quality improved as I moved from older to newer title, which makes sense as programmers squeezed more out of the PS2 as they went along.  Jak 3 is easily the prettiest game in the collection, almost looking like an early PS3 launch title. Jak 2 is also quite impressive graphically though, with environments that look far better than their SD counterparts.  I did find a few problems here and there across all the games.  I found issues with frame rates, clipping, and some very ordinary looking textures.  In defense though I do believe they could be the very same issues that popped up in the originals.  One interesting note is the games only output at 480p and 720p, so this collection does not hit that magical 1080 lines of resolution. 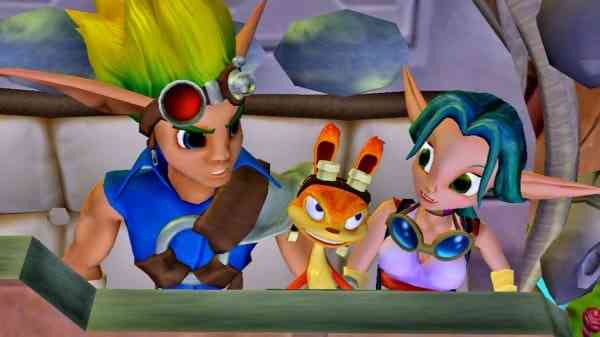 HD remakes can’t perform miracles, and no amount of filters and shading will fix the old programming.  The games are good looking, don’t get me wrong, but they just don’t compare, visually speaking, to more modern titles.  I found it interesting that the Jak and Daxter Collection also has the option to use stereoscopic 3D.  For a 3D game or 3D movie to shine, it tends to have to be developed with 3D visuals in mind.  Being that these games were originally developed in the PS2 era, sans any 3D, I cannot see them being overly eye-popping.  For the record though I did not get to test this out, as I don’t have a 3D display.  Those gamers with the option to utilize the function should at least explore it.

Although the graphics may have been upgraded, the sound is still in yesteryear.  The game is encoded in Dolby Pro Logic 2, which is more than adequate; but I was disappointed in the overall audio quality.  The game’s scripts and voice work are still fantastic and elicit laugh out loud moments galore, but the sonic quality is tinny and flat for the most part.  Explosions are loud and bright but lack the depth we have all become accustomed too.  It really left me wondering where is the re-mastered sound?  Vehicles sound terribly weak and can detract a little from the overall gaming experience.  Perhaps it is just me, but I came away a bit disappointed with the sound quality overall.

For those trophy hunters out there, Jak and Daxter now supports a brand-new set of trophies for you to collect.  There are over 100 of them spread across all three games.  Some are easy to attain, while others are definitely very difficult, but all of them exist within the boundaries of the original games and add to the gameplay as you try to get each one.

The game’s controls are still exactly the way we left them years ago.  The PS2/PS3 controllers are so similar that the transition is almost seamless.  I had a few issues with control in the original games especially during the instances where the visuals were “clipping”, but it was nothing that I could not fight through.  This HD collection has smoothed over some of the tough parts, control speaking, but they have not been eliminated entirely.  Overall my gripe is a small one, as most gamers will fly through these games with little problems. 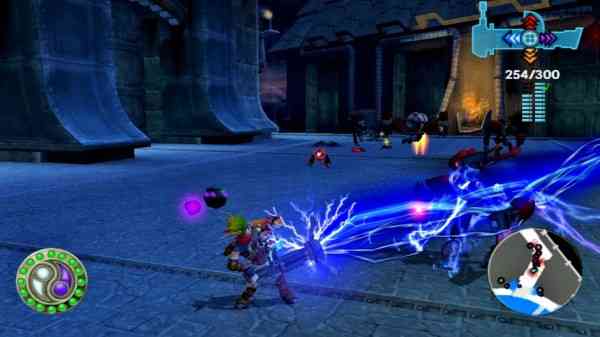 Playing all of these games is somewhat nostalgic.  I can remember seeing, and playing, these games on my PS2.  Sure, it was not my personal favourite series, but it was fun, and I know what brought people to play them.  It was the advent of 32-bit, polygon filled, colourful platform adventure gaming with brand new characters.  The PS2 was a great machine in its heyday and games like this, developed by the ever so creative Naughty Dog, had gamers loving the whole experience and clamouring for more.  Well that still is evident today, in this updated HD collection.  The control is still spot on, although some of the early growing pains stick around (hey, they were just learning), but overall it is fun, and that is what counts.

One of the very few downers in the collection is the lack of any extra content.  The games are faithful to the originals and this includes no extras along the way.  It would have been nice to include hidden or “cut” levels, mini-games, artwork, or even new music re-mixes.  There are many franchise collections out there that do add what seems like little, but turns out to be very important, extra or special content.  I think that this would have been a great idea and it would have given veteran fans something more to look forward too as well as given even more reason’s to entice the newbie to the franchise.

In addition, this collection really is not the definitive Jak and Daxter collection either, as it is missing The Lost Frontier, Jak X: Combat Racing, and Daxter for the PSP.  Sure, they may have been weaker titles in the library, but their inclusion could have made this collection all that more attractive and it would have given everyone all the Jak titles to play and explore.

At the end of the day the Jak and Daxter Collection may be rather old, and have some dated play mechanics, but the games are still quite fun to play even a decade or so removed.  Fans of the series should love the new trophies, not to mention the walk down memory lane in HD nonetheless.  What I am concerned with though is that the exclusion of any special features or added content may turn away those who have played the games in the past, as the included games are the same game’s from before, plain and simple. Of course new players will get a taste of what Naughty Dog used to do before the Uncharted franchise and see the magic they crafted.  At the end of the day this collection deserves a serious look, but there is no doubt that some will pass by, as it is a bare bones collection. 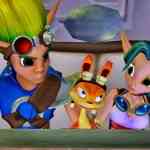 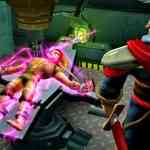 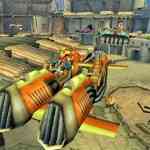 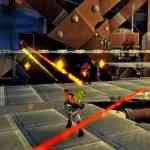 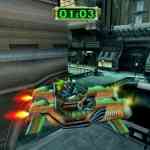 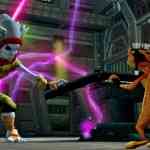 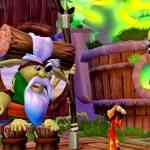 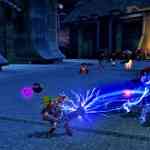