Being a staple of Sony’s impressive list of exclusive titles, it surprised me that it took so long for a Twisted Metal game to hit the PS3.   I dabbled with the Twisted Metal franchise on both the PSone and PS2 back in the day.  The car combat genre has come a long way since its inception.  After playing this latest entry into the Twisted Metal franchise I found this game is a bit of a double-edged sword.  There’s plenty of good, but there is also one big strike against it that a lot of casual gamers can’t overlook.

Considering the length of time since the last game I think it is safe to call this iteration of Twisted Metal a reboot.  For those not in the know, Twisted Metal pretty much pioneered the car combat genre.  It is a simple concept really.  Take a bunch of over the top cars and characters, slap a bunch of big weapons on them, and blow up anything else that moves.  For the most part, this formula works.  When compared to previous games, Twisted Metal doesn’t bring a lot of “new” to the series.  I’m okay with that in the sense that it has been a generation since the last game, but I do admit that I was hoping for more, especially in the verticality of the game which was shown off in the initial teaser videos.  While Twisted Metal does introduce a helicopter that takes the action to the skies, this doesn’t happen until one is well into the single player campaign.

Chaos, mayhem, and frantic are all perfectly valid descriptions of how the action is in Twisted Metal.  For some this is ideal, while for others, myself included, this can be frustrating.  I will go into more detail as to why later on, but you should know regardless that the action is fast and furious.  It is hunt and be hunted.  Against any number of AI opponents there will always be at least one opponent on your tail.  Sometimes it might even feel like you’re the only one being targeted.  While there are standard and special weapons unique to each of the vehicles, if you want to be competitive you will have to seek out the various power ups on each of the maps, as they are a key element in taking down your opponents. 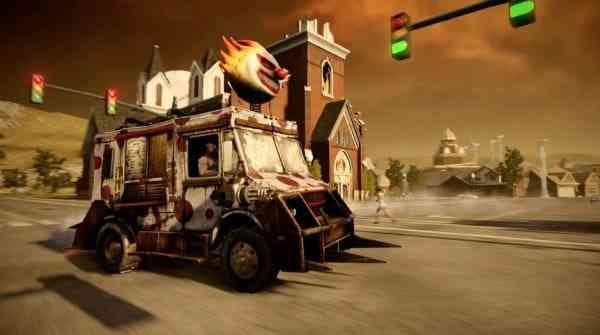 The single player story is told across three narratives centered on different characters.  Fan favourite, and Twisted Metal poster boy, Sweet Tooth is front and center.  There’s a decent selection of event types during the single player campaign.  The majority of the events have the same deathmatch kill-or-be-killed theme.  My least favorite were the Juggernaut events that had me chasing around a big rig that spawned more enemies.  I’m just not that big of a fan of boss battles and that’s exactly what I felt the Juggernaut events were like.  That being said, some might like this though, so it may come down to personal preference.  While the single player campaign feels like little more than primer for the real fun of playing online with your friends, the cut scenes really impress.  They are all done in live action style, which is something that we don’t see much anymore.  Not only do they look great, they are especially creepy and sinister.  As a fan of the slasher flicks of the 80’s this was right up my alley.  This isn’t kid’s stuff, that’s for sure.  I know it is cool to use in-game graphics for these things nowadays, but when it is done like this it is great.

With seven game modes and plenty of variety online you are going to want to play this one with your friends.  Beyond your standard Deathmatch game types there is a pretty wicked version of Hunter (anyone that enjoyed Midtown Madness will appreciate this) and Nuke, which is Twisted Metal’s take on Capture The Flag.  You have to be a little careful here though as the number of players each mode supports varies.  For some reason, Nuke only supports 12 players while the rest of the game modes support 16.  What’s up with that?

As simple as the main concept is in Twisted Metal the controls are quite complex.  Too much so for a casual gamer that doesn’t have as much time as they would like to devote to gaming.  I can get over the steep learning curve, but the complexity of the controls was too much for me at times.  My fingers and thumbs couldn’t keep up to the action.  Try as I might to come to grips with the controls, all I ended up with was having to replay levels too many times and a cramped finger or two.  My biggest challenge?  Using the directional buttons for attacks such as land mines, shields and the freeze ray.  I’m just not coordinated enough I guess.  This may sound extremely trivial but why the game doesn’t offer traditional throttle and brake controls on the X and Square buttons is beyond me.  Yes I know the game offers trigger controls for this, but I have to admit that I am not a fan of the PlayStation controller’s triggers.  Having to try and relearn Square and Circle was an exercise in needless frustration.  A far more logical layout would have been X for the throttle, Square for the brake and Circle for the tight turns.  It might sound like I’m harping on this subject but it really affected my enjoyment of this game and I am sure that it will hamper other’s enjoyment as well. 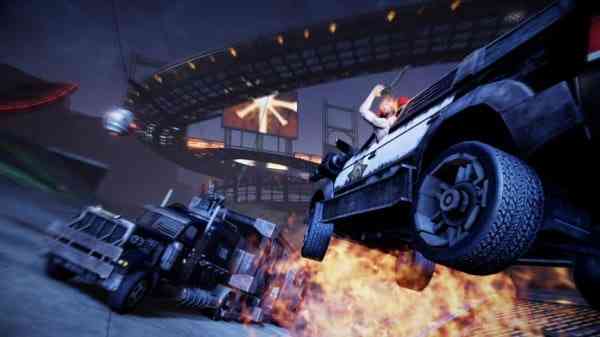 In a fast paced and frantic game like this one, prettiness doesn’t matter as much as functionality.  A good example of what I mean is the aerial preview of each map before events.  You’ll notice things popping up and everything seems to have just an average look.  I thought, “Wow, this doesn’t look all that great”.  But once you’re into the point of view of the actual gameplay things look a lot better.  When you’re blasting around the map with mayhem all around and crashing through windows, houses, and other objects, there is nary a hiccup in framerate and some of the flaws you may notice aren’t so important.  There is a good amount of detail in the cars, their occupants, and the weapons you wield.  That being said, a lot of this detail is visually lost during the gameplay as you are so focused on the game and the pace of it that you are not offered much of chance to stop and check things out.  It wasn’t until I was watching someone else play that this fact dawned on me and I did indeed see how good things looked.  All in all the game looks pretty good and in the end the visuals really grew on me.

The soundtrack is a mix of driving and aggressive metal tracks that fit perfectly within the scope of the game.  I can’t think of another game that’s a better fit for Rob Zombie (Reviewer’s Note: if there’s ever a Twisted Metal movie he has to be the director).  The sound effects are good enough and the voice acting in the cut scenes is great.  The real high point of the game’s sound is the surround sound implementation.  Not only does it sound good it actually becomes integral in being successful during events.  There’s just so much going on on-screen at any one given time I found that I didn’t have much chance to check things like the map and radar.  If you’ve read previous reviews I’ve written I joke frequently about my age and my perceived diminishing gaming skills.  I don’t find I have the capacity to consume the amount of things going on at any one time in a game like this.  It impressed me to find that I was reacting to the sound in the game as much as the visual cues such as the radar.

Twisted Metal sticks very close to its roots and chances are that if you are a fan of the Twisted Metal series as a whole you are going to love this game.  That being said, I did find that a lot of the details and intricacies are lost upon the more casual gamer.  There’s some campy fun in the live action cut scenes but Twisted Metal’s complex control scheme makes it tough for anyone other than the more hardcore and/or twitch gamer to become proficient.  With a good group of friends there is some good fun to be had in the various online multiplayer modes.  In the end Twister Metal on the PS3 is a decent game that is not for every gamer out there.