The Inner World is a point-and-click adventure game first released in 2013 on PC, Mac and mobile, now making its way onto the Xbox One. As a past player of classic point-and-click styled adventure games, The Inner World’s intriguing art style and an unexplained itch toward this genre drew me towards this charming title. Although a clearly different title than the games I am used to playing, within minutes of playing, I realized that scratching the surface would not be enough. Just into the first playable area, I realized that I was in for a relatively unique experience.

The story of The Inner World places you in control of Robert, a sheltered, naïve young man initially seeking to recover an item for his master. As Robert, you come to learn more about Asposia, the mysterious world you inhabit which is in a hollow space ventilated by wind fountains. Mysteriously, all but one of the wind fountains have ceased to blow, taking away the warmth of the world, and being replaced by the Wind Gods. As Robert, your seemingly menial task takes you from rummaging through garbage to unraveling the secrets of Asposia.

The narrative of The Inner World is one of its strong suits with a mixture of mystery, comedy, and a little bit of everything else. Right from the get-go, I knew that The Inner World would have an off-kilter narrative which, along with the art style, is right up my alley. While basically a clichéd story, this comedic and strange narrative really kept me engaged and wanting more as I played through the game. In addition to the actual story, the characters in Asposia are memorable and lively, ranging from the garbage salesman to the intriguing Laura.

As a point-and-click adventure, The Inner World is largely a puzzle title in which you interact with characters, environments, and items, sometimes in various combinations, to move the story along. The puzzles in the game can be relatively unique, and vary in difficulty based on your creativity as well as your puzzle-solving skills. For those who are challenged by puzzles, which includes myself, there is the option to have hints supplied to you of various degrees, and the answer is not revealed until after the final hint. Though the game is full of bizarre, fun puzzles, the at-times finicky controls when selecting points of interest along with an oversaturation of long dialogue sequences hinder the game from being great. 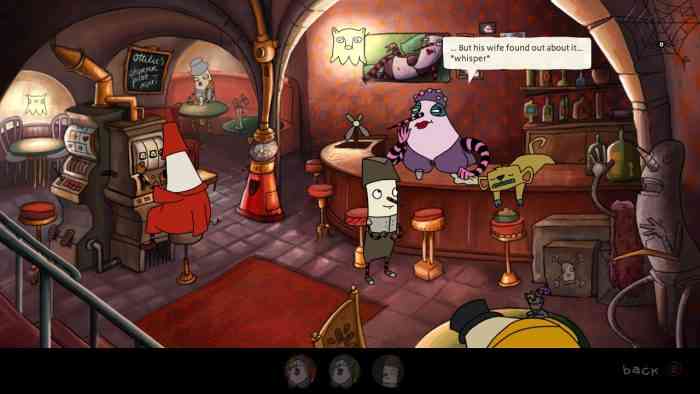 The game’s dialogue is fully voiced, and wonderfully so. The game’s humor hits the mark in some cases, but going back to the well more than a few times makes certain running gags a bit tired. Certain conversations can get also quite long as previous mentioned, especially when the conversations are not central to the story or particularly intriguing. The full voice acting is always a welcome addition to any game, and The Inner World is all the better for it. Alongside the voice acting, the music and sound effects in the game are also done well. Music in the game plays a noteworthy role, given that Robert is a court musician who literally plays his nose as an instrument.

The game features a hand-drawn art style featuring some great looking backgrounds. In addition to the background, as a point-and-click adventure, the game’s cartoonish animation style and movement work very well. However, despite the wonderful backgrounds, the characters look a bit bland when placed in front of these epic backdrops. While the game’s art style is undoubtedly unique and creative, certain close-ups reveal that it is not as polished as it could be.

Overall, The Inner World is an intriguing point-and-click adventure with the gameplay you would expect from the genre. The strength of the game relies heavily on its off-kilter dialogue and story, despite some minor issues with controls and lengthy, tedious dialogue at times. Furthermore, the art of The Inner World is charming despite a relative lack of polish, but the saving grace is perhaps the memorable cast of characters that inhabit this inner world. While not perfect, The Inner World is a charming, memorable experience with unique puzzles and a strong narrative.