As the third DLC addition for Call of Duty: Infinite Warfare, Absolution fails to impress the way that Sabotage and Continuum did. Unfortunately, this latest DLC feels like a step back for Infinite Warfare, amongst the success they’ve had so far. While the new zombie adventure Attack of the Radioactive Thing! is fun and exciting, and the frantic fast-paced gameplay is still very prevalent, the multiplayer maps feel lacklustre, without a whole lot of innovation or vibrancy.

Three of the four multiplayer maps are new, while one is a remake. The four multiplayer maps within Absolution are Bermuda, Permafrost, Fore and Ember. All of the maps, with the exception of Fore feel like completely different additions to Infinite Warfare than what we’ve seen so far, however they are lacking the vibrancy and colour we have seen from all of the previous maps. With that being said, all four of the new maps keep the frantic style of play Infinite Warfare has become known for.

“While Absolution is by no means a disaster it just feels lacking in comparison to the rest of the content we’ve been given for Infinite Warfare so far.”

Bermuda tries to keep things fresh, set in a shantytown surrounding the remains of a shipwreck, and while it features some colour, it just doesn’t feel quite like the Infinite Warfare I’ve come to enjoy. As far as the gameplay and map style goes, it feels like an old school map, with the typical three lane approach, each offering main choke points for a ton of action. Considering it’s old school approach, however, it does offer lots of different areas and space to wall run and double jump for quick and easy kills. Unfortunately, due to it’s fairly small to medium size, Bermuda does run into a few spawning issues that can hopefully be fixed soon.

Permafrost sticks to the Call of Duty formula again, with three main lanes of attack across a frozen city, where players fight to take the middle of the map in a ruined theater to gain the advantage. As the smallest map of the four new additions, this map gives players quite a bit of diversity, offering many aspects of a busy city, from side streets to train stations. Although Permafrost is missing out on the vibrancy that makes the multiplayer maps of Infinite Warfare so captivating, it is the only one that has a reason to be rather devoid of the colour, especially considering it’s covered in snow! This is one of my favourite maps of the Absolution DLC, offering nothing but good old fast paced Call of Duty fun. 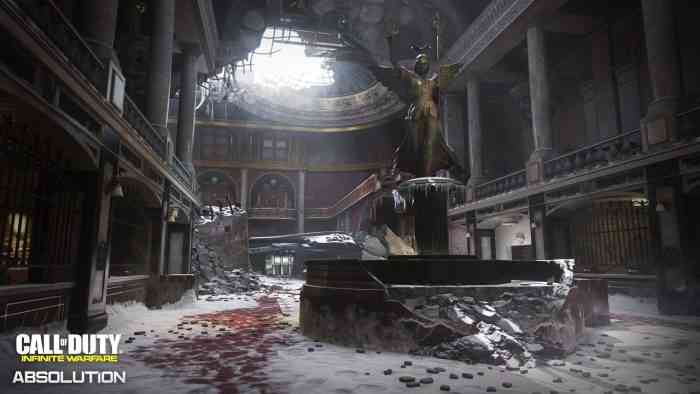 Even though Fore is the most colourful and vibrant of the maps within the Absolution DLC, and also the largest, it definitely is the most frustrating and my least favourite. Fore is a map set in a mini golf course, offering players different environments including a castle, a forest, a temple and some dinosaur remains. Of course these are different themes for mini golf, however, within the map they seem disjointed, without any genuine map flow. Fore is basically a big circle, where there are too many places and corners to get shot from. While this is easily the best-looking map, it is also the hardest one to play, and your enjoyment will completely depend on what type of player you are. This is not only a sniper’s paradise and a campers dream, it’s also the best kind of map for teams that love to play as one singular pack.

“Now, the latest zombies adventures rings true to what Infinite Warfare has established itself to be: a master builder of the perfect zombie experience.”

Ember, although new in name and style, is a remake from the Modern Warfare 3 map  Resistance. Resistance was one of my favourite maps from the Call of Duty franchise, and even though I was excited to hear it was being revived, it simply doesn’t feel like a well-matched map for the play style of Infinite Warfare. Although the map features good lanes and well-balanced gameplay, there doesn’t feel like too much innovation outside of a simple re-skinning of the original map. Resistance is from a time where the combat was ground based and I would have loved for Activision and Infinity Ward to change it up and add more areas for the quick movement and wall running to come into play. On top of that, Ember is also lacking the colour that pulls me into the newest Call of Duty game, which is honestly disappointing.

Overall the multiplayer maps are fairly dark, and in comparison to the colourful maps of the base game, and the two previous DLC map packs, this feels like a step back for Infinite Warfare. Each of the maps will draw in certain types of players, and as long as you know which ones to avoid, you should be able to play through the new maps without getting too frustrated. If you want to save yourself a couple dollars and avoid chucking your controller across the room, you’ll likely want to stay away from Fore, and Bermuda (at least until they fix the disastrous spawns). 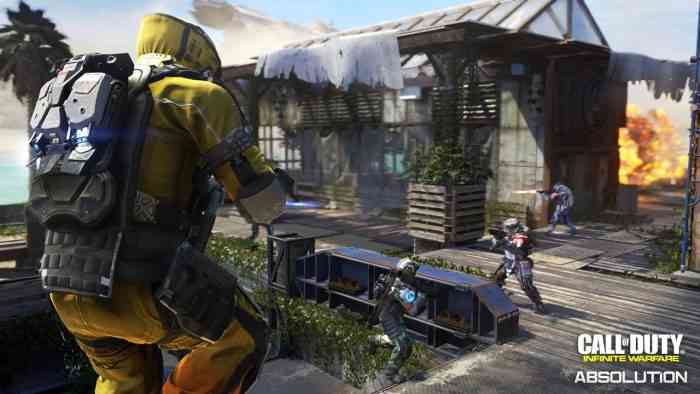 Now, the latest zombies adventures rings true to what Infinite Warfare has established itself to be: a master builder of the perfect zombie experience. Attack of the Radioactive Thing! feels quite different from the previous zombie maps of late, Rave in the Redwoods and The Shaolin Shuffle and although I was worried when I started playing in black and white, the map grew on me quickly.

Attack of the Radioactive Thing! is set in the 1950’s where Willard Wyler, the evil movie director, has once again trapped the four protagonists in a brand new horror film. This new film has players fighting in a beach town following the disasters of a government science experiment gone wrong. Players begin the map playing in black and white, which is in such stark contrast to the colourful stylings we saw in all of the zombie maps so far within Infinite Warfare. If you’re on the edge of your seat wondering if we have to play in a world devoid of colour for long, let me ease your concerns, the answer is no. Once you unlock a couple doors, making your way into a third area of the map on either side of the spawn, or when you reach level three, colour will pop into the map! 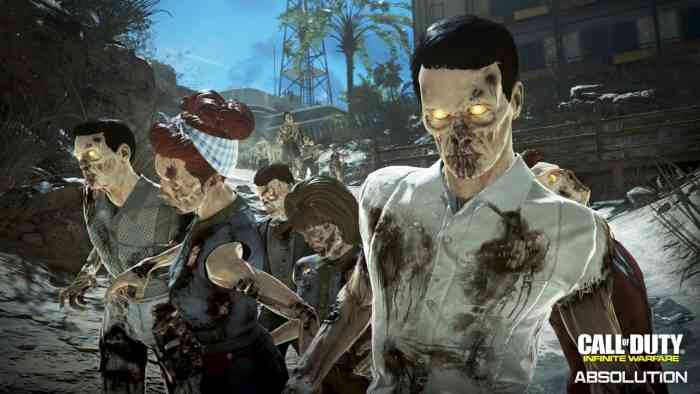 As I’ve said with the previous installments of zombies within Infinite Warfare, I am not a fan of the big and complicated maps that take a million steps to do something. Now, with that said, even though this latest zombies map is very complicated, it’s only that way due to the easter egg. The only real steps you need to take, especially if you aren’t particularly gifted when it comes to zombies, are to find and put together the power switch so that you turn on the power for the entire map. Along the way players will meet the movie icon Elvira, where if you complete the easter egg, she will come into the map to join you in your fight against the wretched radioactive zombies, and the clawed monsters that have been born of the experiments. Now, if you’re really great at zombies, you will have an epic boss battle at the end, where you get to face the Radioactive Thing this zombies adventure is named for!

While Absolution is by no means a disaster it just feels lacking in comparison to the rest of the content we’ve been given for Infinite Warfare so far. Although Absolution does add new content, and the Attack of the Radioactive Thing! is both complicated and fun, the multiplayer maps just don’t fit very well within the constructs of Infinite Warfare. I’m hoping that this DLC is a small misstep and that Activision and Infinity Ward can take Infinite Warfare all the way home with an epic fourth and final DLC in a few months when it comes out.