As the first DLC of Call of Duty: Infinite Warfare, Sabotage is supposed to set the expectations of what is to come, and if that’s the case, we’re off to a good start. Sure, there isn’t much of a reinvention of the DLC formula, but as we said in our review, you can’t fix what ain’t broke. Sabotage comes fit with three new multiplayer maps, and one remake, as well as a new zombies map. Now maybe the DLC formula is predictable, but one thing is for sure that the zombies map, Rave in the Redwood, mixes it up and gives players something new and exciting.

The four multiplayer maps in the Sabotage DLC are exciting and vibrant, each with a unique feel and game style. The four maps are Dominion, a remake of Afghan from Modern Warfare 2, Renaissance, Noir and Neon. Although Dominion may bring older fans back to the game, the three new maps are what could convince the skeptics that Infinite Warfare is not as bad as it has been made to seem.

“The four multiplayer maps in the Sabotage DLC are exciting and vibrant, each with a unique feel and game style.”

While Dominion may not be as inspiring as the the other three maps, with many of the same distinct map features as Afghan, it certainly looks very different. For anyone that might not remember, this is a large circular map, with a wide open middle area surrounding a crash site with multiple vehicles. Compared to the other maps in Infinite Warfare, Dominion does not have many buildings, making the map less movement focused, with lots of room for snipers to control the game. As the majority of the map is wide open there are long sight lines, making this a camper’s delight.

Maybe the least colourful of the maps, Renaissance brings an old school Call of Duty feel to the mix, and not at all in a negative way. There is a lot of detail that has been put into the map, bringing the streets of Italy to your TV. Renaissance is a medium sized map, with buildings and wall running and quick movement possibilities galore! There are limited sight lines, giving an emphasis on close and quick combat. 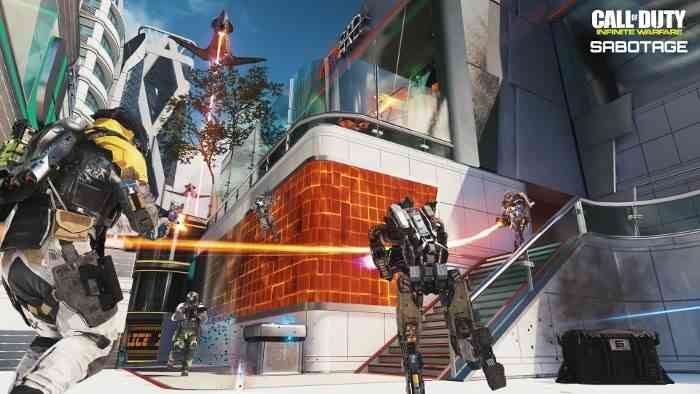 Although many people might disagree, Noir is my least favourite map. Don’t get me wrong, the map looks incredible, however the design with lots of corners to camp in makes this the most frustrating map of the DLC. Noir is set at night in a futuristic Brooklyn with a three-lane map design. This is a small, and fast-paced map centering around close combat, with plenty of buildings to run and jump on.

Neon is my favourite map of the DLC, bringing an explosion of colour to multiplayer. The map design is texturally fantastic, with neon cubes seemingly making up the city, tiny brick by tiny brick. Upon death players explode into little blue cubes, similar to the floating effect in Frontier. As the smallest map of the DLC, Neon brings a futuristic feel to the forefront, relying of the quick movement to crush enemy combatants.

“Rave in the Red Woods is by far the strongest part of the Sabotage DLC, and honestly one of the best zombies maps in years.”

One thing that is truly disappointing about the maps in this first DLC is that they seem to promote the camping culture. Dominion encourages snipers to camp out and pick players off from across the map, while neon and noir have lots of buildings and corners for campers to sit in, awaiting their prey. If you’re anything like me, you’ll be saying “we get it, you can camp, let’s try something else,” by the end of each game, as it slowly becomes your mantra. 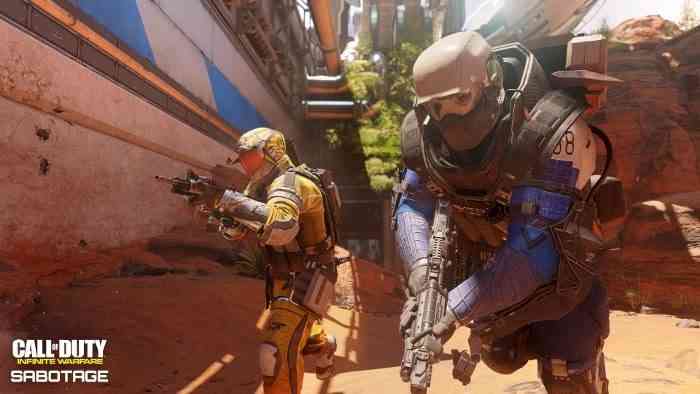 This zombies map is fantastic! Rave in the Red Woods is by far the strongest part of the Sabotage DLC, and honestly one of the best zombies maps in years. Players begin without a pistol, instead using fists to beat the hordes of zombies. As the scene begins in a cabin, players will find a few free melee weapons, including a double handed axe, and a golf club, and let me tell you there is something totally satisfying about smashing zombies with them! Although I normally find these new generation maps way too complicated and stressful, Rave in the Red Woods really doesn’t feel the same way. Of course it is still very high paced, and the map is huge, but overall it seems to be the most well rounded zombies map since Buried from Black Ops 2. 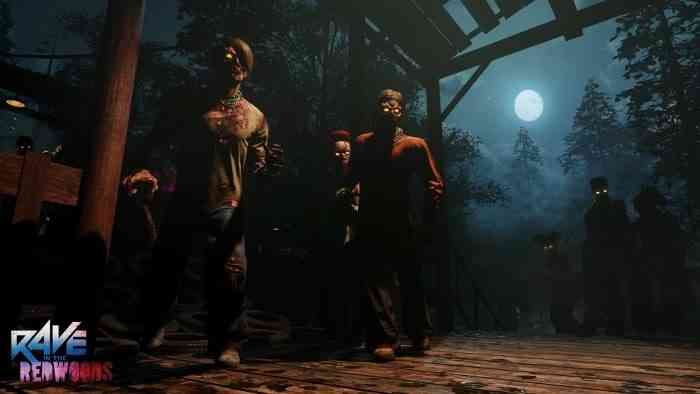 There is still plenty to explore, and many different steps to take in order to make it to the higher levels, however this newest zombies map is just plain fun. With a witty cameo from Kevin Smith, the cast just keeps getting better for this lakeside camp adventure in the woods. One thing that makes this zombies map so great is the rave experience the map is named for. There are fire cans throughout a portion of the map that allows players to throw hallucinogenic pouches into them, bringing the world alive with colour! The first time you do this, it is quite spectacular, and honestly, the excitement of the ‘new’ world really never goes away. This ‘effect’ eventually wears off, but it is a wonderful change from the normal dreary colours of previous zombies maps. I’m not entirely surprised though, as this zombies map seems to take it’s vibrancy from its predecessor.

After spending quite a bit of time with the DLC, I would venture to say that it is the best we’ve seen in a long time! Infinity Ward and Activision definitely put their best foot forward, and it shows. If anyone had their doubts about the DLC, let me tell you there is nothing to be concerned about, as each of the multiplayer maps, as well as the newest zombies map, bring something new and exciting to the table. Hopefully this will be just the thing Infinite Warfare needs to reel some Call of Duty fans back in.

The Terminator Heads To Call of Duty In Its Upcoming Mid-Season Update
Next Earthlock: Festival of Magic Review – A Lacklustre Ode to Classic JRPGs
Previous Poochy & Yoshi’s Woolly World Review – A Balanced and Charming Platformer