Apparently, in the multi-verse that is Nintendo, there is a land of Yoshi’s completely made of yarn. Kamek, the Magikoopa who’s caused havoc in and around Yoshi’s island before, has a need for more yarn. He transforms a bunch of Yoshi’s into balls of yarn and steals them away. Now, Yoshi must adventure through six worlds to save his fellow Yoshi’s and stop Kamek for good… or at least until the next Yoshi adventure.

“Poochy and Yoshi’s Woolly World retains much of the traditional “Yoshi” style gameplay you’ve likely played in past Yoshi games such as 2014’s Yoshi’s New Island.”

Poochy and Yoshi’s Woolly World retains much of the traditional “Yoshi” style gameplay you’ve likely played in past Yoshi games such as 2014’s Yoshi’s New Island. Yoshi can jump, swallow most enemies and throw eggs (though in this game, it’s balls of yarn) to attack or unlock items. The objective is simple, guide Yoshi to the end of each level, while killing an assortment of enemies and overcoming many obstacles. Just like previous games, you’ll encounter mini-game areas where Yoshi is transformed into a vehicle and must pilot his way to the end – these areas always provide a fun break from the standard gameplay (my favourite being the motorbike Yoshi). Each level is filled with hidden areas and secrets, and to completely “finish” a level, you’ll be tasked with beating the level with full health, collect five balls of special yarn (which also unlocks a new look for Yoshi), collect five smiley flowers and collect 20 hidden tokens. Each world has nine levels, two of which are boss levels, and one secret level which is unlocked after meeting certain criteria. Poochy and Yoshi’s Woolly World is not an easy game, so Nintendo has included a “mellow mode” that dials down the difficulty significantly to make the game more accessible to newcomers or those of us who are easily frustrated. 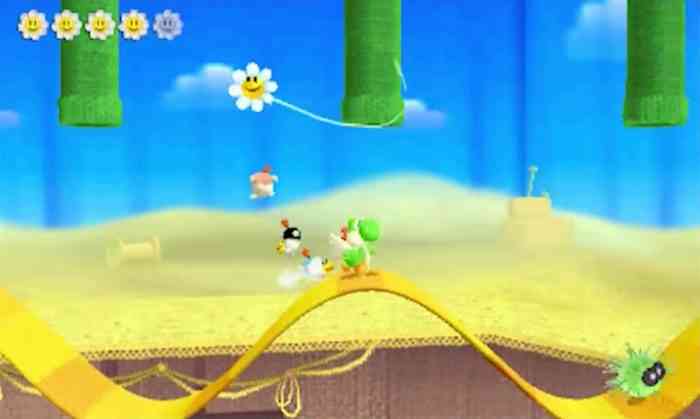 Nintendo has added a few new additions to this version of Yoshi’s Woolly World. For one, there is a lot more Poochy! Poochy, of course, is Yoshi’s canine friend who’s been around since Yoshi’s first adventure, Super Mario World 2: Yoshi’s Island (when Yoshi took on the role of both hero and babysitter). Accessible on the touch screen, you can click the little Poochy icon to play some brand new Poochy centric levels. They aren’t much, but they’re a fun little break in the action and provide another means of earning precious beads (which you can redeem for badges that help you complete some of the more difficult Yoshi levels). Also new is Yoshi Theatre, where you’ll be treated with over 30 fun stop-motion shorts featuring Yoshi and Poochy. Gone is the overworld from the Wii U version, and replaced with a more simplified means of accessing each level. Unfortunately, the biggest subtraction from Yoshi’s Woolly World was the 2 player co-op mode – and while you can still get support from a computer controlled Yoshi, it’s not nearly as fun.

Poochy and Yoshi’s Woolly World is a fun looking game, complete with a yarn aesthetic. This isn’t Nintendo’s first foray into the world of yarn, as Kirby beat Yoshi to it in “Kirby’s Epic Yarn”. While the 3DS version does look good, and offers a 3D mode to bring depth to the visuals, ultimately, this version pales in comparison to the older Wii U version. The soundtrack is filled with the same cutesy and upbeat tunes you’ve come to expect from Yoshi games – and admittedly they can get a tad annoying. As for the sounds, they’re all those classic Yoshi sounds we’ve been hearing for years. 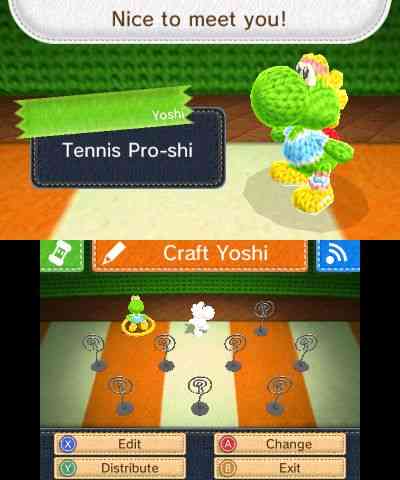 There is little question about it, Poochy and Yoshi’s Woolly World is a great game. The yarn style look is a fun change from most other platformers and while the game has a handful of challenging moments, generally the difficulty is nicely balanced. If you’ve never played the Wii U version, and you’ve enjoyed Yoshi’s previous adventures – or if you just generally enjoy side-scrolling platformers – than you really can’t go wrong with this game. However, if you’ve played the Wii U version, there really isn’t much new content here to warrant a new purchase, unless you absolutely need a portable version or more Poochy.


Get Warhammer: Chaosbane Slayer Edition, The Witcher 3 GOTY Edition, and More At Up to 67% Off

Super Mario 3D All-Stars Review – Mario at His Very Best
Next Call of Duty: Infinite Warfare Sabotage Review – This Crystal Ball is So Crystal Clear
Previous Double Dragon IV Review – A Throwback to the Glory Days of the Franchise