Any idea what 3,332,441 represents? That is the amount of dislikes (at the time of writing) the Infinite Warfare reveal trailer received when it dropped 5-months ago. Think about that for a second. That is more than the entire population of Vancouver, where the bulk of our writers live. It’s a massive number and one that speaks to the amount of internet anger directed towards the franchise on a yearly basis. You just need to look at our YouTube page and, as you would guess, CoD vids have the most dislikes. I have my theories why that is but I don’t try hard to understand it. It is what it is. Regardless of your thoughts on the CoD juggernaut, Activision’s mega-franchise is around to stay and is back again with Call of Duty: Infinite Warfare. With gameplay that largely feels like past entries, Infinite Warfare is a tad thin on innovation but is super thick on plain old fashion fun.

This year, Infinity Ward is up to bat with a full three year’s development time to make what I consider their best Call of Duty game to date. Yes, I get it. Call of Duty 4: Modern Warfare was mind blowing at the time and widely regarded as one of the best CoD games of all time. Yet, the series has made significant strides in nearly every department over the past 9-years. It’s a better game now. Going back and playing Modern Warfare Remastered is a blast, and looks gorgeous, but it’s also a reminder of how much the franchise has matured.

“With gameplay that largely feels like past entries Infinite Warfare is a tad thin on innovation but is super thick on plain old fashion fun.”

Yes, Infinite Warfare is still Call of Duty. All the things fans love are back. The epic set pieces, celebrity cast, snap controls, prestige ranking system, 60 frames per second and even those annoying 12-year olds who kick your ass online are back too. It looks and feels like yet another Call of Duty game. Despite this, Infinity Ward have crafted themselves a game that is all about maintaining a high level of entertainment. It’s just about having fun. Nothing in the Infinite Warfare package feels “mailed in”.

Before I get into the multiplayer and zombies mode, I’ll share my impressions of CoD’s single player campaign. Overall, it’s a solid campaign that involves straight forward story set in the futuristic setting. It isn’t linked to any other Call of Duty games and there isn’t a confusing branching duel storylines to follow. Without spoiling much, it is a story that is easy to follow where you play as a Captain tasked to lead a crew to take down the Settlement Defense Front lead by Admiral Salen Kotch voiced by Game of Thrones star Kit Harington. The campaign features plenty of your traditional “boots on the ground” gameplay but there are some key innovations that stuck out. 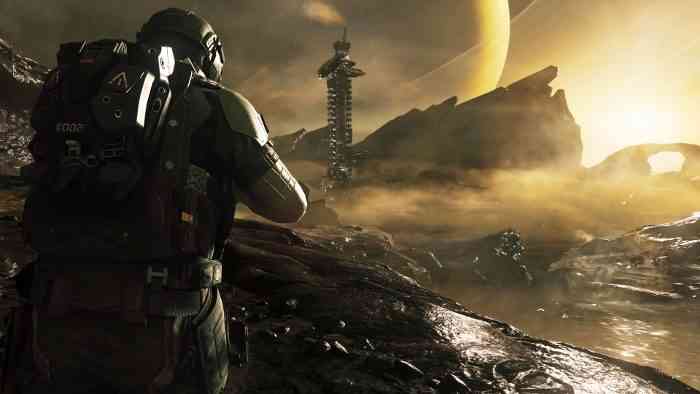 The new setting includes outer space and some thrilling jackal sequences. Unlike other CoD games where the flying mechanics have been on rails, these jackal sequences give you full 360 control and it is that freedom that truly shines. Granted, every so often I would become discombobulated but the mechanics felt smooth and those fighter jet sequences worked quite well. Likewise, the zero gravity shootouts in space where you are equipped with a boost pack, and a grappling hook, are entertaining and challenging at the same time. It’s all about variety and Infinite Warfare seems to give you a lot of that.

Some of the other single player highlights for me include the lack of load screens; smooth transitions from the “boots on the ground” gameplay to flying in outer space; the central hub where you can view your progression; and lastly Infinite Warfare includes side missions. These missions unlock as you progress and you are given the opportunity to tackle these missions whenever you please. This strays, in a good way, from the traditional linear single player mode previous Call of Duty games have offered.

“The campaign features plenty of your traditional “boots on the ground” gameplay but there are some key innovations that stuck out.”

All in all, I counted 31 different acts and missions in the campaign which took me around 8-hours to complete. One fella at the review event managed to burn through the campaign in 5.5 hours but he did admit he skipped most of the side missions. This is standard length for a Call of Duty game but I found it to be the appropriate length. Any more and it would have felt redundant. Any less and I don’t think I would feel like I got my money’s worth.

Infinite Warfare’s multiplayer mode clearly takes ‘if it ain’t broke’ approach this time around. There is a new Defender mode which can be seen in the video below but otherwise, it largely plays and feels like Black Ops 3’s multiplayer. There are new weapons, lethals, tacticals, maps and combat rigs (which are similar to Black Ops 3’s specialists) yet there is no denying the Infinite Warfare’s multiplayer feels like more of an extension of what we have already been playing for the past few years. Regardless, it remains a rich and deep experience.

The maps themselves are balanced and look stunning. These seem far more vibrant this year. All maps feature that 2-3 lane structure engagement with either linear or circular style maps. Bottom line, you get into the action and fast. There is also enough going on outside the game with leveling up, salvage, customizations, and loot crates to keep you entertained all year. But if you have come to Infinite Warfare looking for something entirely brand new in the multiplayer department, you’ve come to the wrong place.

Last, but not least, is Infinite Warfare’s zombie mode which is quite easily the most fun I’ve had playing a Call of Duty zombies game to date. Mind you I never made it past level 11 and have probably barely scratched the surface when playing the mode, but the 1980’s vibe is something that really resonated with me. 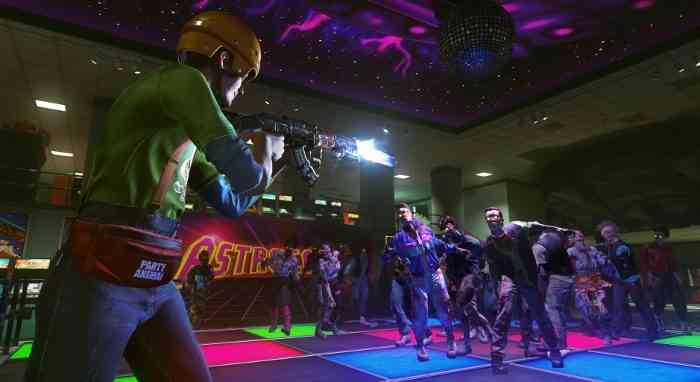 “Zombies in Spaceland” (as its called) transports you into an original storyline where you’ll fight as one of four 80’s characters. The story is centered on you and your 3 cooperative characters who are aspiring actors that come upon a mysterious movie theater for an audition. After a series of events the actors are transformed into characters on screen and directly into a twisted nightmare that takes place in a space-themed amusement park overrun by the undead. It is a terrific setting, opening up all sorts of possibilities for exploration and uncovering the secrets of the park.

“I absolutely loved the vibrant energy about this 80’s setting. Zombies in Spaceland is also stacked with talent.”

I absolutely loved the vibrant energy about this 80’s setting. Zombies in Spaceland is also stacked with talent. The demented Director, Willard Wyler, is portrayed with voice and likeness by Paul Reubens (Pee-Wee’s Big Holiday, Gotham). Seth Green also lends his voice to one of the four ‘80s archetypes. Ike Barinholtz (Neighbors, Suicide Squad), Jay Pharoah (Saturday Night Live, Ride Along) and Sasheer Zamata (Saturday Night Live, Inside Amy Schumer) round out the remaining characters. Last but not least in the game you’ll encounter an enigmatic DJ in the theme park, portrayed by David Hasselhoff (Knight Rider, Baywatch). Additionally, the music is fantastic and features some classics from the 1980’s. Needless to say, Zombies in Spaceland features plenty of ear and eye candy.

Zombies in Spaceland takes full advantage of the theme park setting. You can ride the “Polar Peak Roller Coaster” and shoot zombie targets to earn rewards. Or you can head over to the “Afterlife Arcade” which allows you to come back to life by playing old school carnival and arcade games. New weapons include “Face Melter” gun and a hilarious exploding boom box. It essentially lures zombies in, makes them break dance, and then detonates all nearby zombies. It’s awesome, and I can’t wait to keep playing.

Call of Duty: Infinite Warfare doesn’t reinvent the franchise in any way. It brings back everything fans love about the game and that is an exhilarating single player campaign, a frantically deep multiplayer experience and one of the most memorable zombie games you’ll ever play. As an added bonus, if you pick up one the special editions you also get Modern Warfare Remastered which looks absolutely stunning. If I can find any one fault with Infinite Warfare it would be that I still don’t see enough innovation and the development teams still appear far too gun shy to stray from the Call of Duty formula. By this stage we all know what we are getting and this year is really no different.

***Reviewed on the PS4 at an Infinite Warfare review event***