Continuum is the second DLC of Call of Duty: Infinite Warfare, and it certainly builds on the success Infinity Ward has had with the game so far. Continuum delivers even more style to the new set of multiplayer maps than ever before, as well as an exciting 1970’s disco zombies adventure! Infinite Warfare is getting the DLC formula just right, giving fans old and new a chance to really enjoy all aspects of the latest content from Continuum.

The four multiplayer maps in the Continuum DLC are stylish and colourful, with each bringing a different style of play to the mix. There are three brand new maps, and one remake, much like all of the previous Call of Duty DLC map packs. The four maps are Excess, a remake of Rust from Modern Warfare 2, Archive, Turista and Scrap. Much like with Sabotage, Excess may bring older fans back to the game, while the three new maps are what could bring some new players into the fold.

“The four multiplayer maps in the Continuum DLC are stylish and colourful, with each bringing a different style of play to the mix.”

Excess could not have been revitalized in a better way, as it has come a long way from the oil yard of Rust to become a luxurious metropolitan rooftop. It looks nothing like the original map, except for the long pipe that runs along the centre. Considering the small size of Excess, this map becomes quite chaotic as the battle for the middle building/pipe ensues. There are long sight lines for snipers to take advantage, without a whole lot of cover, throughout the middle of the map, and there are lanes on both sides of the map for those who like to run straight into the action. 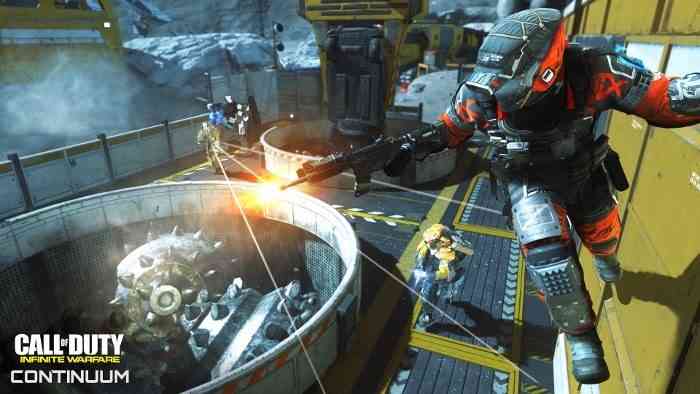 Archive takes place in an art gallery, where the focus of combat remains, for the most part, in the centre of the map, inside the buildings. With that being said there are good sight lines and lanes to run straight through the middle, as well as two lanes to flank from either side. While there aren’t many places for players to sit around sniping, there are a few windows outside of the main buildings that will scratch the itch. Archive is a medium sized map that has quite an outstanding amount of detail put into the art around the map, making it look really sleek and stylish with splashes of colour throughout.

Turista is my favourite map of the Continuum DLC, as it is not only looks fantastic, but it is also very fun and practical to play. The map is a futuristic resort that features stunning scenic landscapes, and waterfalls built along the remains of some prehistoric animal. This map is perfect for all types of players. From corners and small buildings to camp in, and places to hide and snipe from, to lanes to run and gun and flank from, it truly is a COD player’s dream!

Scrap is by far my least favourite map in the DLC pack, because even though it looks cool and is seemingly very interesting, it is cramped and lacks any kind of practicality for the typical Call of Duty player. It is based in, as you might have guessed, a junkyard in space, that features various pieces of metal and machinery throughout the map. This is the map that could have given players the most potential for the space theme, however the only gravitational feature in the map is a magnet that flips you upside down if you jump too close. It is quite cool, however also very disorienting and it leaves you as a sitting, rather hanging, duck for the enemy to pick you off. The lanes are small, the style of play is chaotic and the small map leads to very misplaced spawning. 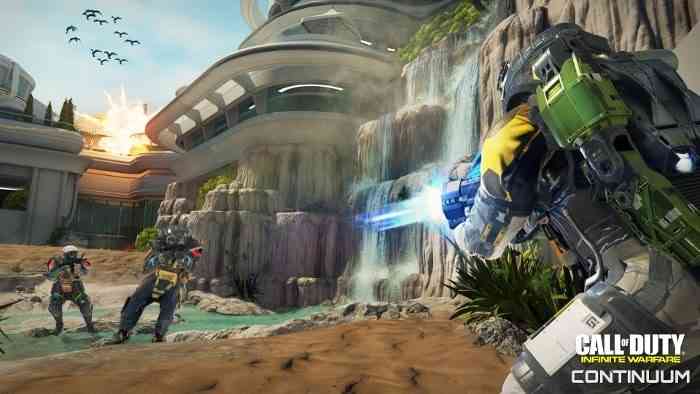 All of the maps are small to medium in size, and none are overly large. This focuses more on a chaotic and fast-paced style of play, whilst still allowing snipers to get in some perfect shots. Unlike Sabotage, the Continuum DLC does seem to give campers preference, which is a nice change, and it really focuses on the style of each map. All of the maps look fantastic, and fortunately three of the four are very really fun. There always has to be a dud, and unfortunately it was Scrap this time around.

Now let’s get straight into the new zombies map! I am the first to admit that I’m not the best at zombies, and I entirely dislike the big and complicated maps that have become the new normal. With that being said, this newest DLC zombies map, the Shaolin Shuffle, makes the map less about working through a bunch of annoying steps to get to a reward, and more about the enjoyability of the zombie map and Kung Fu moves.

The Shaolin Shuffle takes place in the 1970’s and features some very cool Kung Fu moves you can receive from Pam Grier, who makes a special appearance as the Kung Fu master! There are four different styles of Kung Fu: Dragon, Tiger, Snake and Crane and each are, as you might have already guessed, a different fighting style. Each round, players are able to pick up a “Kung Fu drink” that can be activated at any time throughout it, or they can go back to the dojo, to exchange their fighting style. These Kung Fu moves come in incredibly handy as you move through the higher levels, as they will help out in some tough spots.

“Three out of the four multiplayer maps are sleek, exciting and fun, and the Shaolin Shuffle is a perfectly balanced zombies map.”

There are four power switches, in four different areas, that will need to be activated in order for perks to be enabled, as well as an underground area that connects one side of the map to the other. At the same time you are unlocking different areas, there are also three items that you need to pick up: a pink cat strip club flyer, a strip club token and an old film reel, in order to unlock the pack-a-punch machine. While the Shaolin Shuffle has step-by-step components to it, it really isn’t all that complicated once you figure out where to pick up these items, and where the power switches are. Unless you plan on playing through the Easter egg, this is as complicated as the map gets. Let me tell you, considering the Shaolin Shuffle is a huge map, where you will have to battle roller-skating zombies and a rat king boss, it really does focus on the fun of killing the hordes of zombies. The newest zombies map definitely strikes the perfect balance between the classic zombie simplicity and the new-age complications in an entirely immersive 70’s disco throwback!

After spending hours with the DLC, it is apparent that Infinity Ward and Activision are on a roll with Infinite Warfare, and they are giving us some fantastic content! If anyone is still on the fence about the game, let me tell you that this DLC just adds so much more to an already great title. Three out of the four multiplayer maps are sleek, exciting and fun, and the Shaolin Shuffle is a perfectly balanced zombies map. I would go so far as to say that both Sabotage and Continuum have added more fun to Infinite Warfare than what could be found in the base game. One thing is for sure, I cannot wait for the next two DLCs if they are anything like the first two!