When I set out to review Infernax, I thought I knew what I was getting into. It’s basically just Castlevania with a bloodier aesthetic, I told myself. I was delightfully wrong. As I said in my preview of Infernax, this game is very self-aware about its gory and sometimes schlocky contents. Oddly enough, this allows it to touch on one subject Castlevania never quit for me: religious horror. I won’t describe Infernax as nuanced, exactly, but there’s something very raw about it at times. This title walks the line between straightforward gory fun and a surprisingly interesting, largely non-verbal exploration of faith.

The game also appears to have gone through some major difficulty rebalancing, especially on Classic mode. Gold is now significantly harder to come by, for example. This helps create a sense of genuine difficulty and resource scarcity that Classic mode was lacking before. Minibosses and quests add a lot to Infernax’s world and story, and the game feels much more alive now. This is a tad bit ironic, as the game is also packed full of death, darkness, despair, and all that jazz. It is a bit short, but that doesn’t matter when it’s so hard on Classic mode.

Bigger and Gorier Than Ever

The full build of Infernax starts off on exactly the same note as the preview. For the first fifteen or so minutes, the biggest differences are a mysterious woman who runs away from you and the fact that you can change Alcedor’s name now. Then things start expanding massively. The Metroidvania elements of this title show in full, with multiple different dungeon areas of varying ranges of difficulty. Some require new abilities to access, while others demand either a high degree of skill or better armor. However, the review version of Infernax is still pretty linear for a Metroidvania. There’s a very clearly defined order by which you’re supposed to access areas through most of the game. Scouting ahead is still an option, though, which helps figure out where you’re supposed to go next.

In this game, you play as the heroic duke Alcedor and fight to restore peace to your demon-ravaged lands. However, if that’s not your style, you can also take the good duke down a dark path. Maybe his time in the Crusades affected him more deeply than he lets on. Maybe the forces of darkness made a power-hungry young man a better offer. Or maybe Duke Alcedor just finds the clergy of his domain incredibly irritating. Either way, Infernax offers a villain campaign for those who prefer to play as the bad guy. If you choose the right options, you can allow dangerous highwaymen to terrorize your citizens, ally yourself with a mysterious cult, and more. 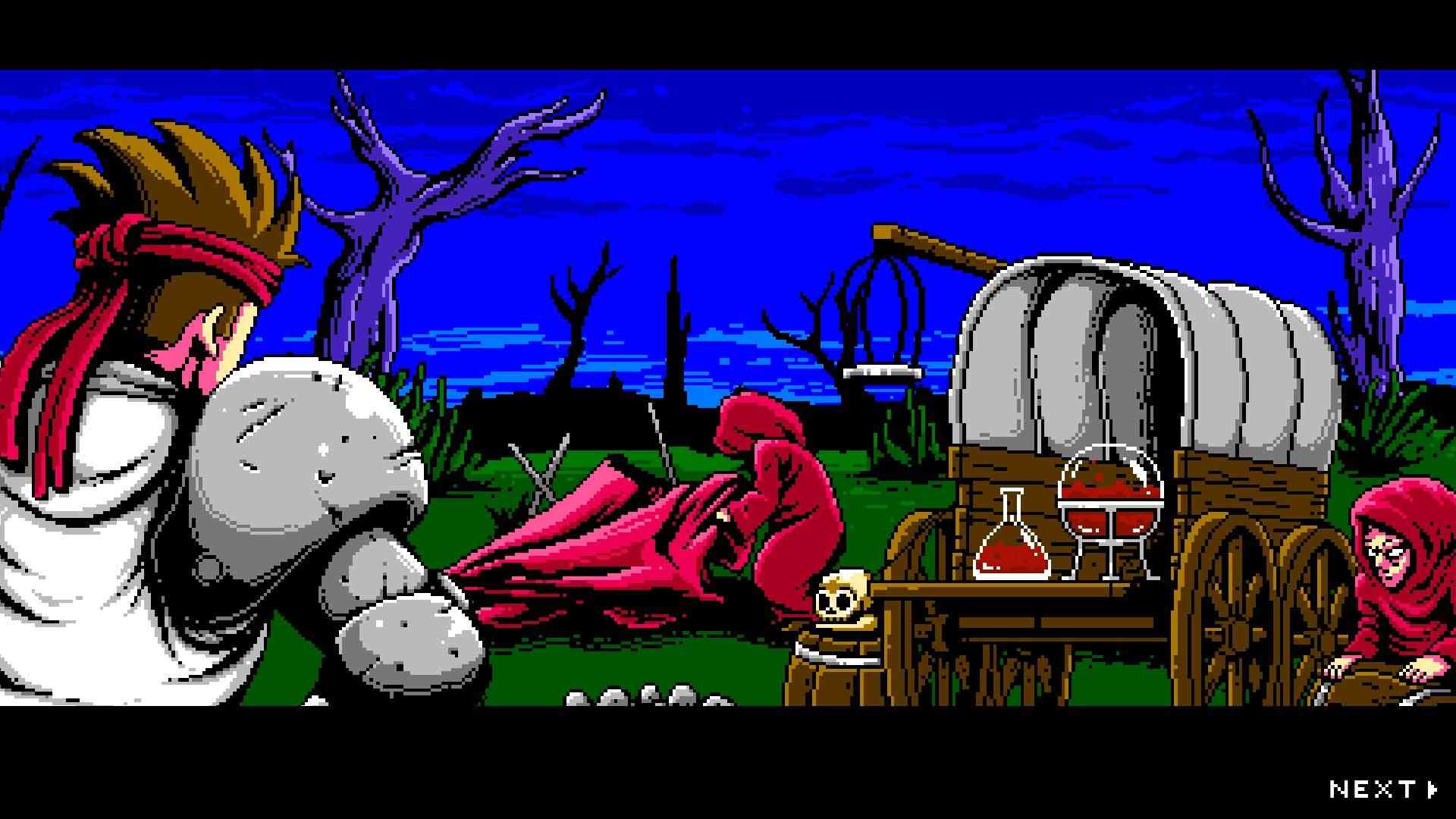 Either way, Infernax features a treasure trove of optional boss fights, each of which has its own gimmick. Each boss and associated dungeon looks unique, too, though they share a unifying aesthetic. Needless to say, that aesthetic is gory and occasionally weirdly sexual. Speaking of which…

I can’t overstate how much I enjoy the feel of this game. The graphical style draws heavily on old-school Castlevania and other gothic horror games. The color palette is very limited, but it gets the point across. However, it has a very different mood from Castlevania, probably because of its more visceral take on religious horror. 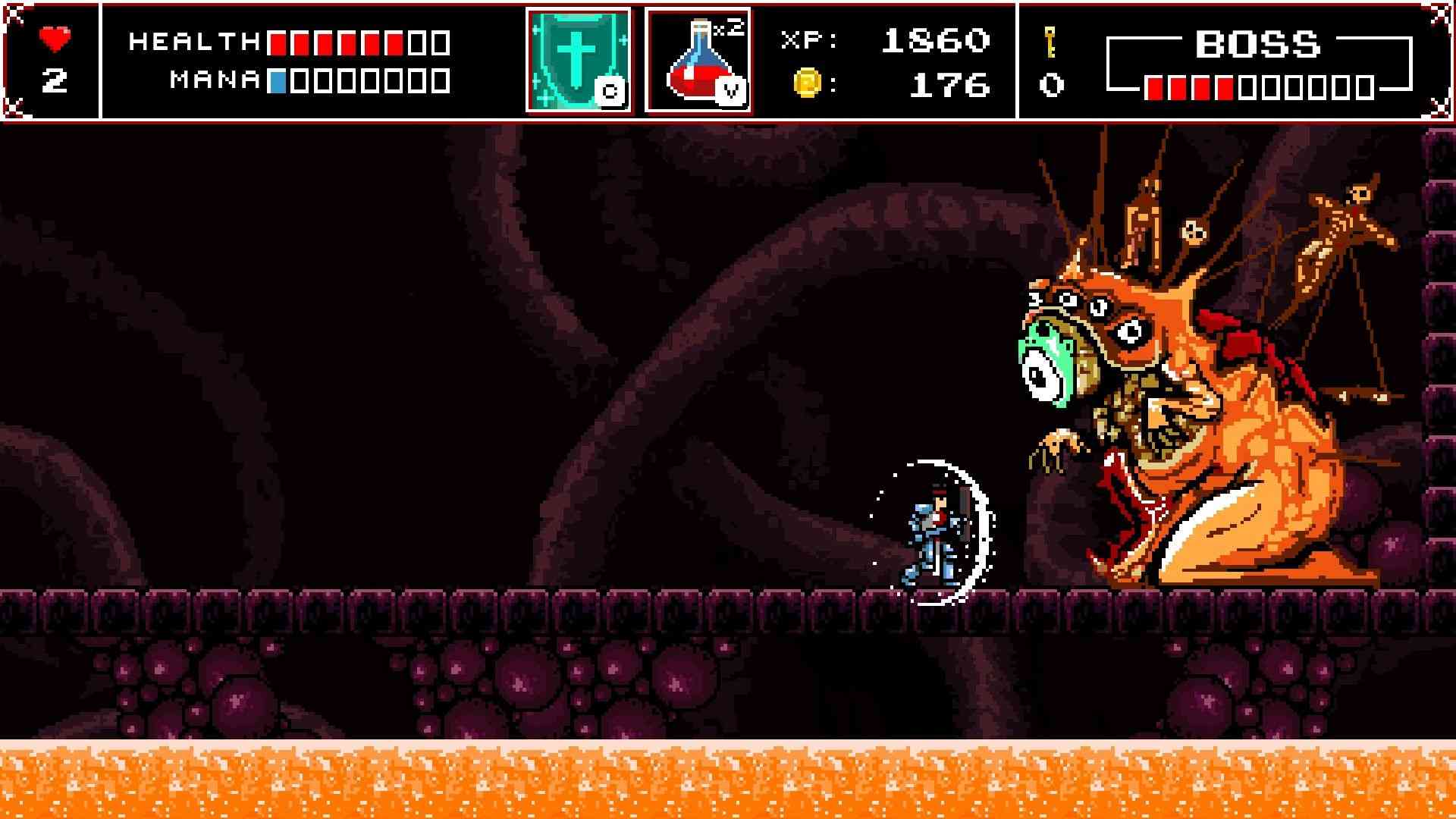 Castlevania’s gothic horror aesthetic has become one of the series’ biggest appeals over the years, especially once artist Ayami Kojima got involved. Many Castlevania games are well-known for their lush sprite work, gorgeous official art, and brooding character design. The trappings of Christianity are often featured prominently, from crosses to the Crusades. However, most of the actual spirituality in classic Castlevania draws from the experiences of its Japanese developers. Infernax’s gory, messy take on demons, demonology, and prayer is something entirely different.

Infernax is a game about death and corruption. However, it’s also a game about the struggle to help others. The backgrounds of most dungeons include still-moving human sacrifices, dripping blood, and hanged bodies. Many stages also feature a villager or guardsman facing off against monsters. Most of the time, these bystanders will be killed long before you reach them and their corpses will decorate the stage. However, sometimes the game hiccups, enemies spawn in the wrong place, or you move a little faster than usual. Sometimes you can save these nameless background characters.

Carrying out quests for the townsfolk will also often have a tangible impact on the environment as broken bridges and buildings are repaired, leading to a brighter world. This is a game where terrible things happen. You can contribute to the suffering for your own amusement, or you can fight to end it. 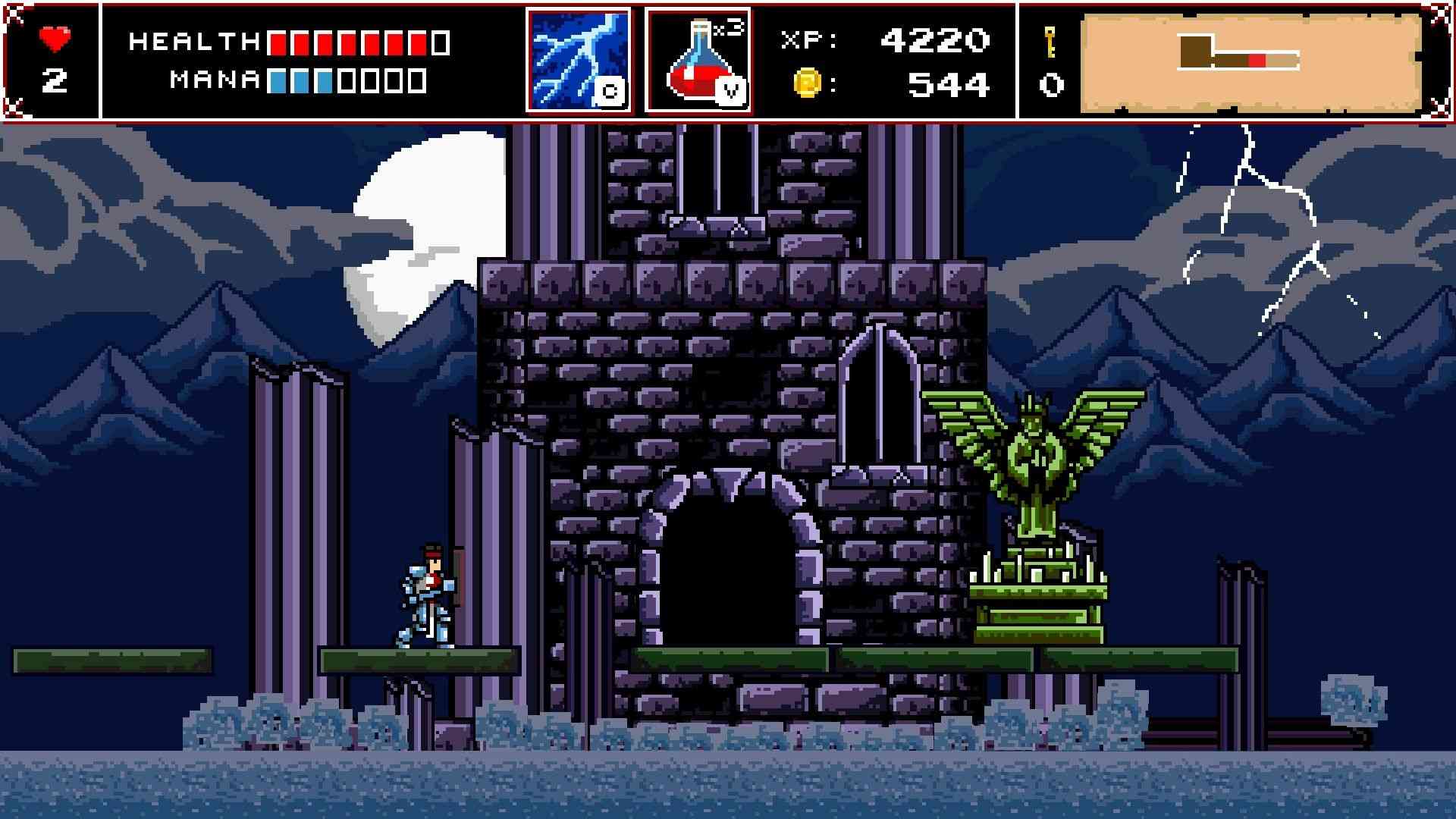 Platforming is a Nightmare

There’s a lot of infernal imagery in this game. However, I can confidently state that any section with spikes, lava, and platforming together comes directly from the pit. The only thing worse than having to make nine jumps in a row over lava to get a key is realizing you have to go back through it all to reach the door. In other words, the single biggest obstacle in Infernax is the platforming–not because it’s bad, but because there’s so much of it. I don’t care if this game was marketed as an action Metroidvania, if you aren’t a fan of platforming, do not play Infernax. There’s a good chance that already-rare gold will fall into lava or off the screen during platforming sections, too. You also can’t swim, which makes sense given that Alcedor is wearing full armor. 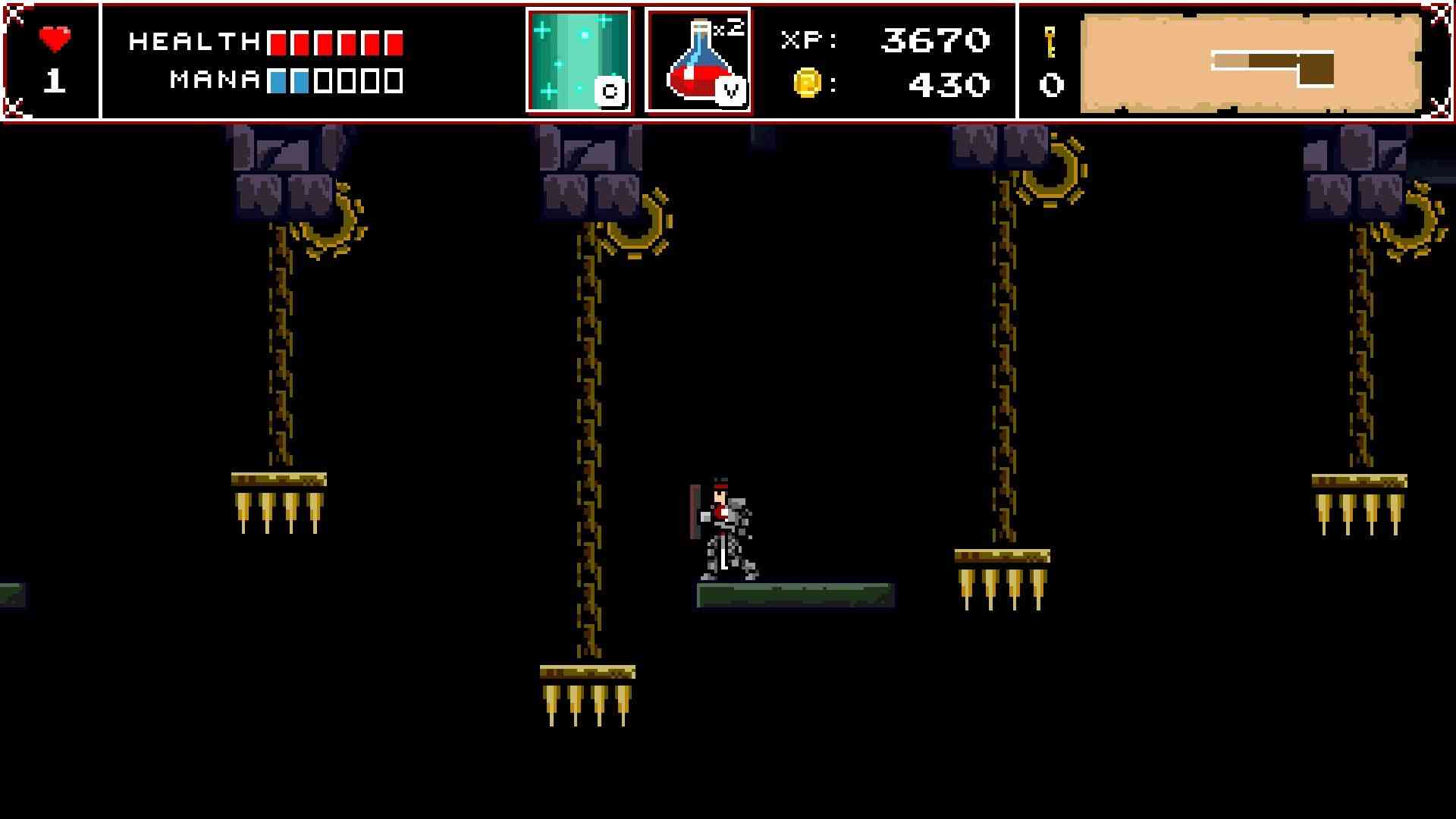 Classic Mode is grueling, especially the boss fights. I recommend grinding for upgrades before you even try facing down Valeshire Keep. Speaking of dungeons, there’s one dungeon in particular that is really, really hard to trigger. Good Metroidvanias encourage backtracking to open up new avenues. Bad Metroidvanias demand you backtrack just to figure out what’s going on. I wouldn’t describe Infernax as a bad Metroidvania, but I will say that a walkthrough might be required to find Stormheim.

The game now features a day/night cycle that determines what types of monsters appear. Night is generally when the harder and faster hitters come out. This can be a good way to farm gold and experience, but the risk isn’t always worth it. 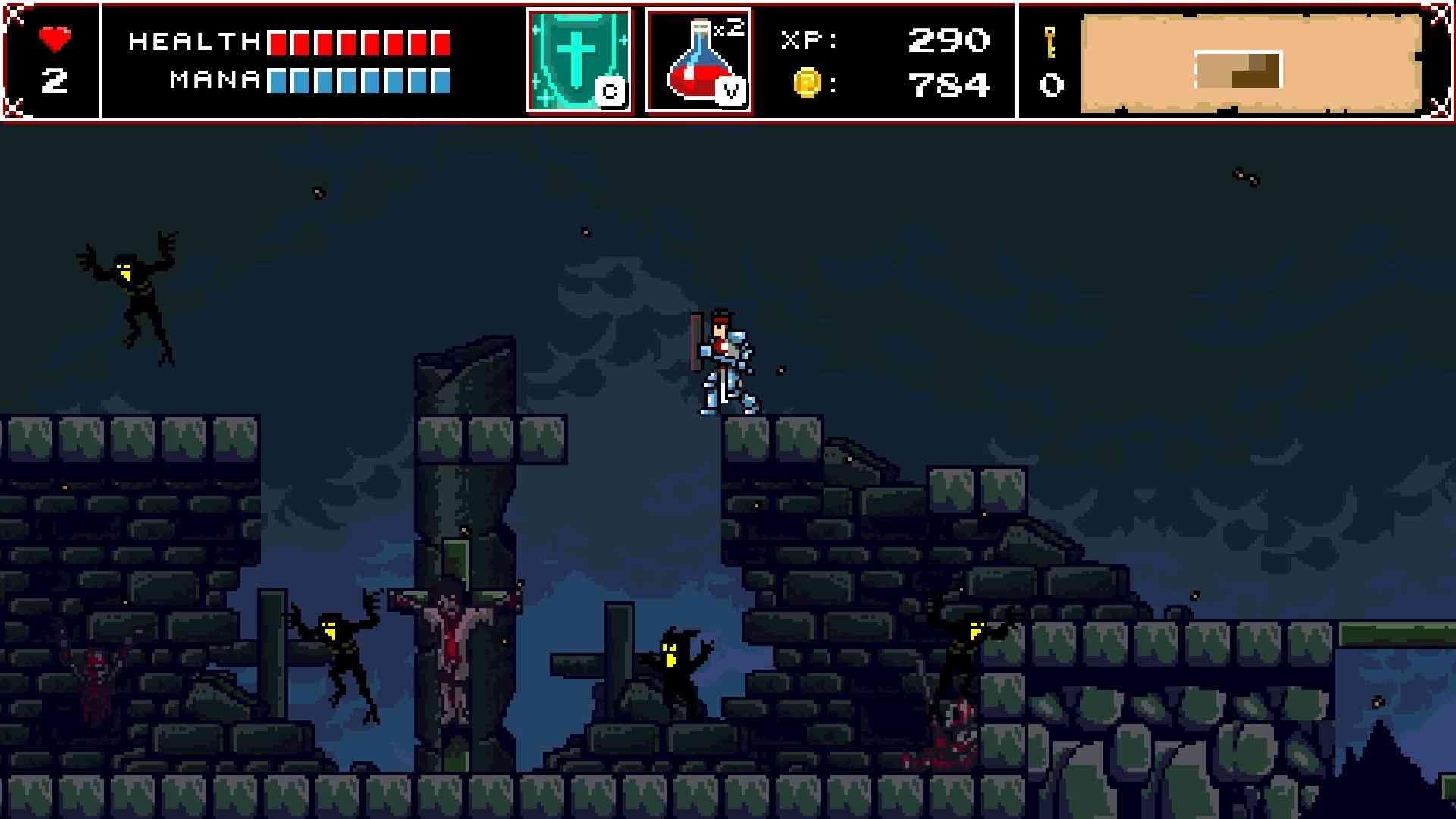 All in all, this review finds Infernax to be a bloody good time. Again, though, be sure you know exactly what you’re getting into. Also, be wary of the platforming.