HYPERGUN, a new first-person rogue-lite shooter from NVYVE studios, is definitely not what I’d call a subtle game. It is a fast-paced, bombastic, neon-tinged romp through a digital world, and it dives into this aesthetic head first. That’s a good thing too, because, at least on a surface level, HYPERGUN really stands out from many other shooters. As a first-person shooter, it also adds to a relatively scarce sub-genre, since most rogue-lite games tend to lean toward 2D sidescrollers, such as the recently released Dead Cells, or a more top-down approach like in the critically acclaimed Binding of Isaac. Therefore, HYPERGUN has a lot going for it, and I wish I could say it follows through on that potential. Unfortunately, in its current state, HYPERGUN is rife with balancing issues and poor design choices that significantly hinder the game as a whole.

Many rogue-lite games don’t give much context as to why you face wave after wave of enemies only to die and do it all over again, but HYPERGUN has a simple yet brilliant explanation: it’s all a simulation. You play as Dewey Owens, an intern at DevTech Labs, a company developing an ultimate weapon to combat some menacing alien invaders. You snuck into the office on the weekend to enter the HYPERGUN simulation over and over until you create the perfect weapon. I love this setup for a few reasons, but mostly because it takes the tried-and-true rogue-lite mechanics of permadeath and upgrading your character and puts them in a context where they make perfect sense. Each time you die in the simulation, you can choose to start again immediately, or go out into the office to walk around, look at your stats and even snoop on other employees via their computers. The little details you find about your coworkers and the world provide levity to the game with some silly and fun writing that pokes fun at what office politics would be like on the brink of an apocalypse.

Jumping into the simulation for the first time, I had a ton of fun. The guns themselves feel decent on their own in how they shoot, but like other rogue-lites, the real addictive quality comes from finding new attachments for your character, or in this case your gun, to gradually become all powerful. However, I soon realized how stingy HYPERGUN is with its loot drops. You are given one attachment at the start of your run, which is fair enough, and from there you rely on enemies and designated treasure rooms to find new attachments, hypercoins (the in-game currency), health, and more. The problem is, item drops feel few and far between, and most of the time what is dropped is either not exciting or occasionally completely useless. Many of the gun attachments feel underwhelming and don’t add much to the gameplay variety. That being said, there are a few whacky standouts, such as one that shoots out a spinning gun that also shoots a barrage of bullets as it rotates.

Hypercoin System Is a Literal Drag

One of my biggest issues with HYPERGUN is the hypercoin system. You need to collect them to unlock nearly everything, including the three other available classes, and you need a lot of them. Each new class costs 50 hypercoins, and I wasn’t able to collect enough until I had clocked about three hours of gameplay. It feels a bit extreme, and I would have preferred if all the classes were unlocked from the start so the hypercoins could be used solely for unlocking new attachments and abilities for all the classes. This would allow players to experiment more and find a class that best suits their playstyle. Instead, the current system forces you to play as one character for hours before another option is obtainable.

Even beyond loot drops, a lack of careful balancing permeates HYPERGUN. For starters, the difficulty is damn near impossible and there is no option to change it for those looking for a more casual experience. Though the enemy AI isn’t all that smart, each room will have hordes and hordes of enemies coming at you from all directions. This can get overwhelming at times, but what makes it worse is there aren’t enough audio or visual cues to indicate if enemies are behind you. This became especially frustrating when I would be fighting a group of aliens directly in front of me and get blindsided by a separate horde behind me I had no idea existed. Enemies will spawn at random times in random places and with such a limited field of vision as an FPS game, it became a huge challenge to keep track of where everything was. In a game where every hit point is crucial, losing a chunk of health to an attack I could have never seen coming felt like a sucker punch to the gut. 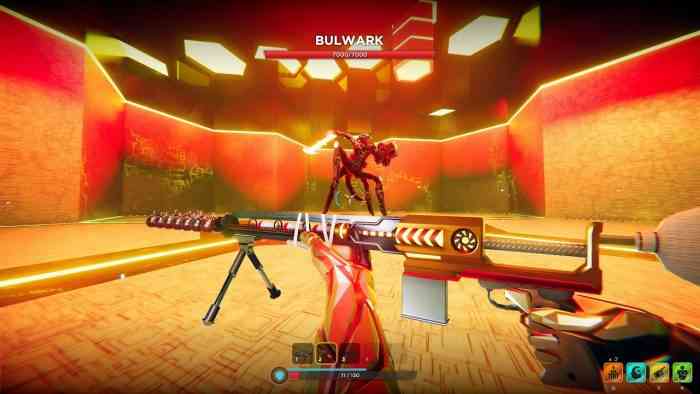 On top of that, the levels as a whole, as well as individual rooms, take far too long to get through. Some rooms can take upwards of ten minutes to complete and getting through them unscathed is an achievement in itself. Once you reach the end of each of the six levels, there will be a boss encounter. Though the bosses are actually quite fun to fight, it adds yet another layer of difficulty. By the way, beating a boss and moving on to the next level doesn’t reset your health to full, so if you barely survive a boss, your chances of surviving going forward are slim. All this meant once I finally died after an hour-long run of finding powerful attachments and conserving as much health as possible, I felt so defeated, the thought of going all the way back to the beginning was harrowing. Permadeath is a touchy mechanic, and here, the punishing aspects of it outweighs the reward.

In many ways, HYPERGUN is like an unfinished house. It is held up by a solid foundation and looks good from the outside, but once you step inside you realize so much of what makes it function is still missing. The 80s neon aesthetic and soundtrack are great, and the fast-paced gunplay has an almost doom-like feel to it, which adds to the frantic energy. Nevertheless, that doesn’t excuse the numerous balancing issues. After some major patches and fine-tuning, I could see HYPERGUN blossoming into a good, possibly even great game, but for now, it’s just a failed simulation. 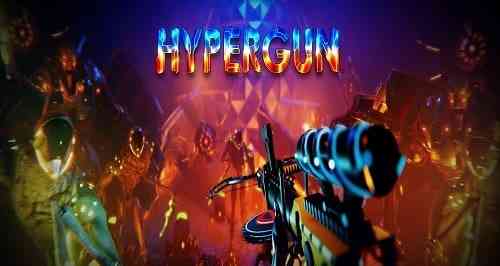