Here at COGconnected, we had the chance to go hands-on with a suite of products from IOGEAR’s Kaliber Gaming line. We have our hands-on impressions of the MMOMENTUM Pro mouse and the KeyMander 2 here, but this review is all about the HVER PRO X. A quick introduction for the keyboard, the HVER PRO X is an optical-mechanical keyboard with RGB backlighting.

Moving on to my impressions of the product, perhaps the first thing I noticed about the HVER PRO X was its design. The keyboard is undoubtedly sleek with its aluminum plated design, and was a surprisingly nice touch. While it looked incredibly sleek and sharp, the way the edges fray out from below the keyboard make it look bulkier than it could be. I’m somewhat conflicted by the design, as it certainly feels a bit like the pros and cons of the look balance each other out. While I appreciate the premium feel to the keyboard, a smaller profile would have been icing on the cake. 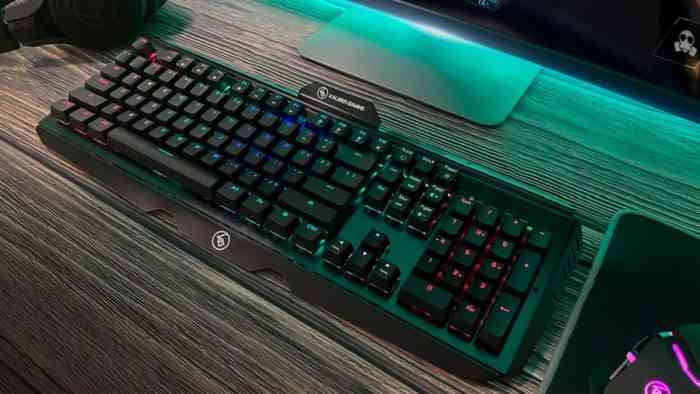 The HVER PRO X utilizes brown optical-mechanical switches, which are a bit quieter and require less actuation force than blue switches. Typing with these keys felt fine, though the clicks were not as satisfying as some other keyboards I have used in the past. While other keyboards might have a more satisfying feel to them, the HVER PRO X’s clicks were  noticeably quieter (as advertised), which was a welcome difference. The performance on the keyboard (for both typing and gaming) matches what one might typically expect from a gaming keyboard, though perhaps not as satisfying as a purely mechanical keyboard. For its relatively lower price point ($79.99), the keyboard functions well.

Overall, the HVER PRO X is worth the price of admission. You could definitely do a lot worse at this price, and the keyboard swings above its price point. After giving the keyboard a go for a decent amount of time, it was hard to feel that the keyboard had any serious cons to it. Over time, I feel like the HVER PRO X might shine even more when it comes to liquid-related accidents or even basic cleaning given its design. While the aesthetics of the keyboard could have done with a smaller profile, the sleek look and feel of it make up for that particular shortcoming.