Hopalong: The Badlands is a cowboy-themed arcade shooter, now brought to full immersive life in VR. Developers From the Future promise players lots of cartoony violence, virtual horse-riding, and of course a heaping helping of good ol’ shoot’n’, all in 360-degree realism. It’s a little simplistic and the controls can be frustrating, but there’s no doubt it mostly delivers some fun Western-themed VR action.

Movement can always be a challenge in VR; since you can’t have players actually walking around their living rooms and falling over coffee tables, some VR games avoid the issue altogether and have you stuck on rails or completely stationery. To their credit, From the Future has come up with a unique solution that, when it works, feels pretty refreshing. You grab one of your Move controllers and flick it up and down, which will cause your “horse” to move. The faster you flick your controller, the faster you’ll gallop.

It’s a good idea and gives Hopalong: The Badlands a lot more mobility than most VR titles. On the technical side, the movement mechanic mostly works but it can be finicky. I found that my horse often went off course and galloped to the left rather than straight, and I’d have to hold my Move controller at a weird angle to get where I was going. There’s also the fact that turning around is achieved by pressing the Move controller’s buttons for a quick-turn, so I often over-ran my target location and struggled to retreat, which was very frustrating in a tough gun-fight. 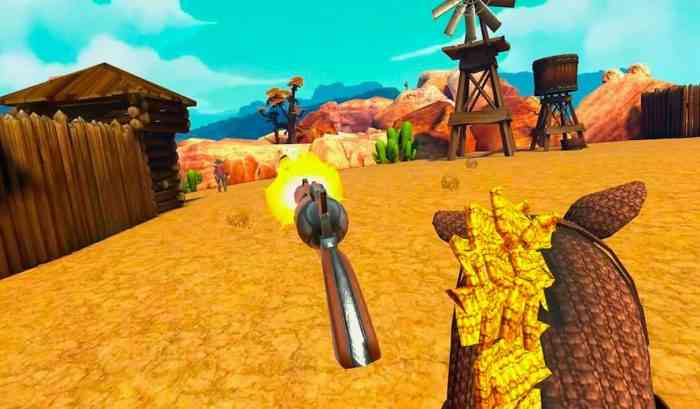 Hopalong: The Badlands has 11 levels in which you are the Sheriff engaging in gunfights with members of the outlaw Dynamite Gang, in such varied locations as canyons, mines and Old West-style towns. You use your second Move controller to shoot bad guys, who might have guns like you, or other weapons like dynamite requiring you to move around and avoid getting blown up. Mounted guns, and the fact that some enemies will move around as well, make things challenging at times despite the simplistic set-up, and if you’re looking for a true challenge to your shooting skills Hopalong: The Badlands scratches the itch.

But again, mechanics can sometimes get in the way of the fun during gun fights. Aiming the gun was an imprecise affair in my experience, and when combined with cumbersome movement could make for some unfair deaths that I imagine will leave many players frustrated. I also struggled to get the reloading down – you are supposed to point the gun down at your hip but I usually had to take a few tries to get it to work. Once again, that isn’t exactly ideal when you’re in a frantic fight to the death with enemies taking pot shots at you from all sides. 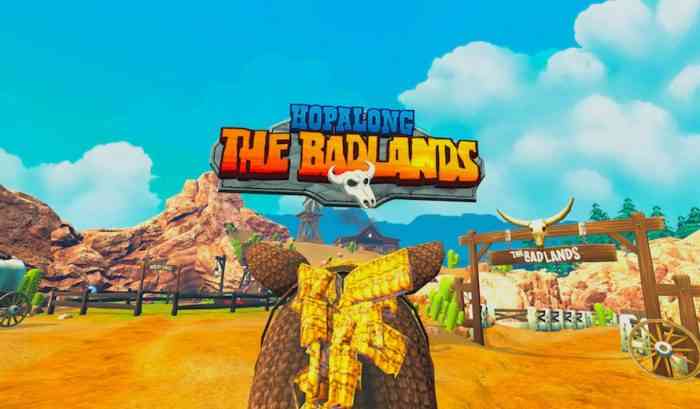 In the area of production values, Hopalong: The Badlands gets a lot right; the voice acting, especially for the narrator, is spot-on, and the guitar-strumming musical accompaniment sets the right Western atmosphere to make you feel right at home as a gun-slinger. I would have liked to see the visuals be a little more consistent though; the enemies looked very blocky and as for the landscapes, while I appreciated the cartoon aesthetic they felt a bit basic and lacking in detail.

In the end, it isn’t small technical flaws that are the problem with Hopalong: The Badlands. It just lacks enough depth to make it anything more than mediocre. The somewhat-small number of levels are given a bit of thematic variety but the core experience is just too repetitive most of the time. Incentives to explore, such as collectibles scattered among levels, are a nice try by From the Future, but in the end this just feels a bit too much like a basic, one-dimensional game that relies on the novelty of VR to provide the illusion of substance and depth.

If you love arcade-style shooters and long to see what they’re like in VR, saddle up your hobby-horse and by all means check out this cute and charming offering; but otherwise, you’ll find that the less-than-perfect mechanics and simplistic gameplay don’t quite hit the Bull’s Eye. 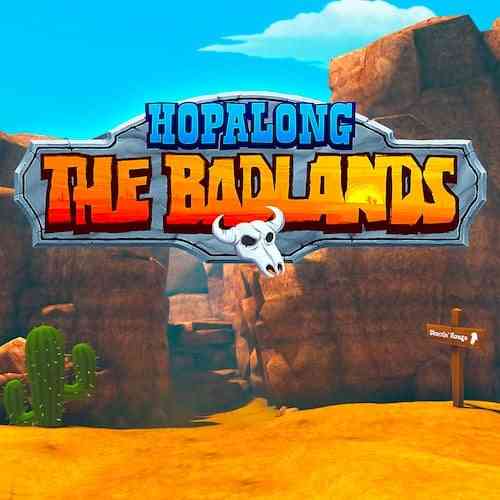 Developer: From the Future

Publisher: From the Future