Hero Defense Review – I Can Be Your Hero, Baby

Tower defense games are nothing new. Whether it be Plants vs Zombies, Sanctum, or my personal favorite, Defense Grid, they all have some general common traits. Usually, they involve the player frantically placing defensive towers or characters to defend against the incoming onslaught of enemy waves. They’re hectic and fun and require a level of cunning strategy not always needed in other games. Hero Defense shares many traits of past tower defense games. A top-down view like Defense Grid and movable heroes like South Park: Lets Go Tower Defense. However, there’s plenty here to stand out from the tower defense crowd, including a decent sized campaign, campy humor, RPG elements, and challenging gameplay. Let’s take a look.

Hero Defense takes place in a sort of Transylvania-type country. The evil Count Necrosis and his minions have invaded the local town, destroying every building and killing many villagers. Now, a group of unlikely heroes will band together to take down the Count. The group is led by Jack, a vampire hunter who is also the son of Count Necrosis. Joining him is Barrows, an older man who seeks revenge for his dead wife, Sam Hain, the little witch with a fiery attitude, Jane Doe, a murder-victim brought back to life in someone else’s body, and Wylde, the cocky half-man, half-werewolf.

I’m Holding Out For A Hero

The basic premise of the game is quite simple. You place a character along the enemies path and your character will automatically attack the enemy as they pass by. Your character cannot be injured at all. Even after you place any of the five characters, you’re free to move them anywhere else on the map. In fact, most maps will feature multiple enemy paths and you’ll need to move your characters around to combat the various waves. The first six or so maps essentially teach you how to play, slowly introducing each of the characters. When you complete a map, you have the chance to return to the town. Here you’ll spend gold (earned from defeating enemies) to restore certain town buildings. For example, restore the Academy, and you’ll be able to apply earned points to each of the characters – a sort of RPG-like leveling up system. Restore the Forge and you’ll be able to add additional abilities that you can charge-up during your battles – these abilities could increase your attack or increase the speed of your attacks. From here, you’ll be able to return to the map screen and pick the next level or replay any previous level on harder difficulties or with special difficulty modifiers on it (such as beat a level with just one character). 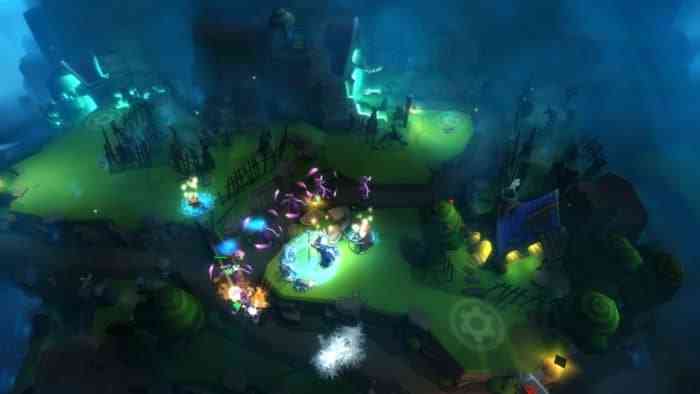 During the battle, you’ll gain money and orbs for defeating enemies. The money will be used in the town to rebuild buildings and purchase gems. Orbs are your means of upgrading your characters within the levels. These upgrades are predetermined by you (you can set them at the Forge in the town) but they’ll reset after you complete the level. For example, if you’re facing enemies that Jack is stronger against, you’ll spend more orbs on him. Gems are another currency in the game and you’ll use them to upgrade your characters weapons, certain buildings, and to build shrines on the levels. The shrines can only be placed on pre-determined locations, however, the type of shrine you pick is completely up to you. If you want a general shrine that will enhance the attack of any character placed in it, so be it. If you’d rather have a shrine specific to Jane Doe, then she’ll have all her abilities enhanced while she’s placed in that shrine. The nice thing about the shrines is they don’t go away, so you can replay levels with your previous selection of shrines – saving precious gems.

And They Say That A Hero Could Save Us

I ran into a few issues along my journey to stop Count Necrosis. First, the game’s difficulty level ramps up pretty fast around the mid-way part of the game. This forced me to replay earlier maps to level up my characters. This kind of grinding really impeded the flow of the game – which up to that point was pretty enjoyable. At times, I got bored replaying the same maps over and over on higher difficulty settings. Fortunately, the game does a decent job of informing you if the level/difficulty you selected will be beatable or impossible (in which case you’ll just have to go elsewhere and level up some more). I often found myself fighting with the camera too, especially when I was dealing with multiple paths and moving my characters around. Fortunately, you can pause play and pick where you want your characters to go – this made it easier to deal with the camera issues – but even then, it was sometimes a hassle. Also, the characters were a bit on the stupid side, sometimes attacking random enemies within a horde instead of the first enemy. So an enemy that’s right at the end of the track might only need one more hit, but the character attacking it will attack a different enemy and that first enemy will reach the barricade at the end of each level. If five enemies or a boss character hits the barricade, you fail the level and have to restart. You can manually target individual enemies, but the process was very buggy and difficult to figure out – hopefully, a future patch will make this process easier. 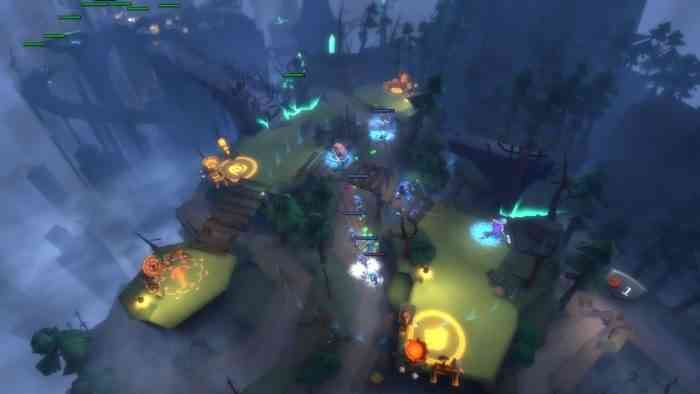 Hero Defense won’t win any awards for visuals, even for a tower defense game. Each map is very dark and gloomy, with very little variety. There are only five different types of standard enemies (one enemy that is weak against each of the five characters). There are also six boss characters that you’ll come across throughout the campaign. The five heroes each have their own look, personality, attacks, and a specific color associated with them. All the characters in the game, including the town’s mayor, are voiced. The dialog is a bit campy but had some little tidbits of humor thrown in – it brought back memories of the old game Monster Madness: Battle for Suberbia (2007).

Hero Defense is a solid take on the tower defense genre. During the game’s battles, you’ll have a bit more control over your characters than you usually would in a tower defense game – this can lead to some hectic moments when bouncing from one enemy path to another. Between battles, you’ll have some RPG style elements thrown in that will allow you to customize your characters to better suit your playstyle. The game had some minor frustrations. The flow of the game gets hampered down half-way through – forcing you to replay past levels. It took me just shy of 10 hours to complete every level in the game, and even then I still had a number of stars to earn (ie: playing every level on the higher difficulty settings). Despite some of the frustrations, I walked away from this game very satisfied – it’s definitely one of the more enjoyable tower defense games I’ve played. If you’re a fan of tower defense games or looking for a game that forces you to strategize, Hero Defense is an easy recommendation. 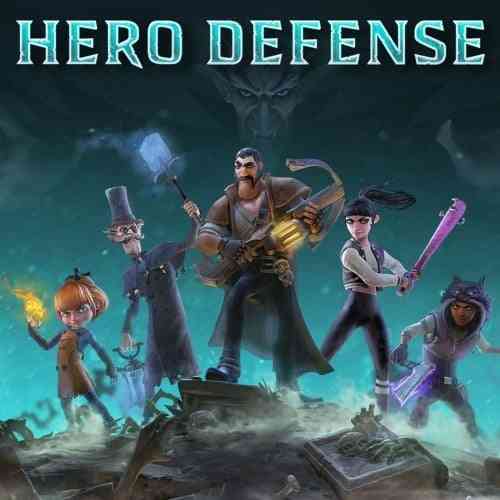