The fine folks at Drinkbox studios are bringing us back to Juan’s Mexiverse with Guacamelee 2, and if you may recall, we were particularly fond of the original title, as well as it’s “Super Turbo Championship Edition”. It’s safe to say that they’ve bought us back a bigger, better and burlier game title, giving people more of what they wanted. Guacamelee 2! packs new moves, new enemies, and one seriously el-fuego soundtrack that are highlights of this anticipated 2D Mexi-vania.

Picking up roughly 7 years after the end of the first game, Juan’s living life with Lupita, the former damsel in distress from Guacamelee. Things have quieted down considerably, and Juan’s gotten a little porky as a result, but if a multiverse-level threat isn’t enough to rapidly get someone in shape then I don’t know what is. Soon enough, Juan’s donning his lucha gear on a wild wrestling adventure that’s absolutely stuffed with more of what people loved from the first Guacamelee. Across a variety of environments and some tough as nails platforming, Juan has to stop the scheming Salvador from finding the sacred guacamole, that would cure his ailment and make him nigh unstoppable. It’s a bit more of an ambitious plot than the first title, but Drinkbox’s kept it interesting enough to keep you curious about what will happen next. Salvador’s crew gives Calacas’ posse a pretty good run for its money as well, with each of the new antagonists providing some excellent boss battles that just drip of the innovation that Drinkbox demonstrated n the first title. The creativity doesn’t end there, either, as Guacamelee 2! packs a ton of new enemies into the game as well. Towering skeletons with pinatas for heads, four-armed giants, and all sorts of Alebrije (colorful creatures from the land of the dead) stand between Juan and his quest to gather the three relics needed to find that sacred dish Salvador seeks, and for the most part, the new additions are fantastic to beat up on, both as a man and as a chicken.

Guacamelee’s known for its simple, satisfying combat. Making use of lariats, headbutts and all sorts of suplexes (…suplices?), Juan can kick some serious skeleton ass, and through Flame Face’s training sessions, you can see how it packs surprising depth. Through careful timing and cancellations, you can string up some pretty impressive combos, and Juan isn’t the only one who can do it. A welcome addition is the new moveset for when he turns into a chicken. Juan’s Pollo form gets its own set of unique moves, and it’s rather entertaining watching a tiny, belt-wearing chicken clear out a room full of skeletons with relative ease. The exploration in Guacamelee 2! has been improved as well, and the map is absolutely teeming with secrets both big and small. New costumes, extra cash, and some heftier sequences I won’t spoil here all reward the intrepid traveler, so it is well worth the effort to find that tiny, chicken-sized path or carefully hidden block for Juan to smash through, as there’s always something worthwhile at the end. Cash is even more useful as well, with the game featuring a variety of trainers that can help Juan enhance his moveset, and each upgrade is worth pursuing. Some are a little simple, being straight damage increases to his special moves, but others allow Juan to immediately grab enemies after dodging, or turn your enemies into explosive, skeleton-shaped bombs once you defeat them. The combat flows even better than it does in the first title thanks to the new additions, and it continues to reward mixing things up to maximize Juan’s flashy skill-set. Accompanying this satisfying combat is one seriously killer soundtrack with a ton of varied tunes that will likely stick in your head for sometime after the credits roll. 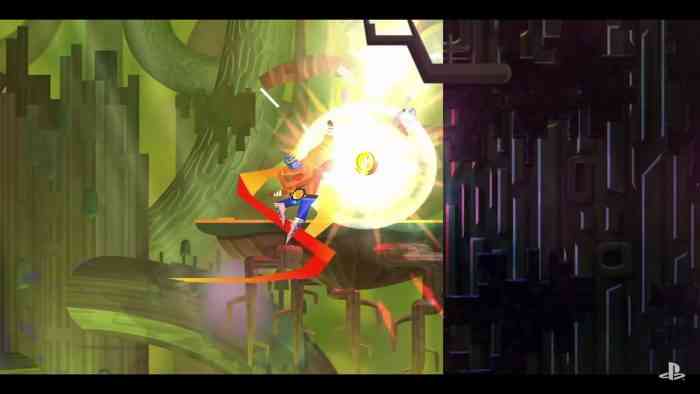 As satisfying as the combat was in the first title, it can be a bit intimidating to newcomers. Returning players will have no issues stepping back into the ring, but newbies may face a bit of a wall to overcome. Guacamelee 2! could definitely have benefited from easing players into things, as the combat is surprisingly complex. This gets further augmented by how challenging some of the platforming is, as Guacamelee 2! feels like it’s been designed with returning players in mind, rather than allowing new ones to pick up on things as quickly. Guacamelee 2! definitely doesn’t reward button mashing like some similar titles may, and it’s something you’ll have be mindful of if this is your first time stepping into the ring with Juan, but there’s an immensely satisfying combat system in place that rewards your efforts, and that’s something that’s rare these days, without a doubt.

The platforming challenges are definitely a step up from Guacamelee as well, with some secrets hidden behind deviously laid out obstacle courses that require shifting between the land of the living and the land of dead, while also making use of your various moves in the process. These challenges are all incredibly satisfying to finally pull through, but much like the combat, it can seem daunting to newcomers to the series. I can’t stress enough though that despite these challenges, once you get the hang of these mechanics you’ll be as enamored with it as I was during my time with the game, it might just be a little tricky to get the hang of at first. Fortunately, the platforming segments are laid out in such a way that failure isn’t a massive setback. You have unlimited lives to work with, so make like a luchador and keep trying, and you’ll likely get the hang of it with a bit of practice. Even as a returning player I had to get familiarized with how Guacamelee controls, but it’s just so satisfying to tackle these challenges that it’s worth the effort. 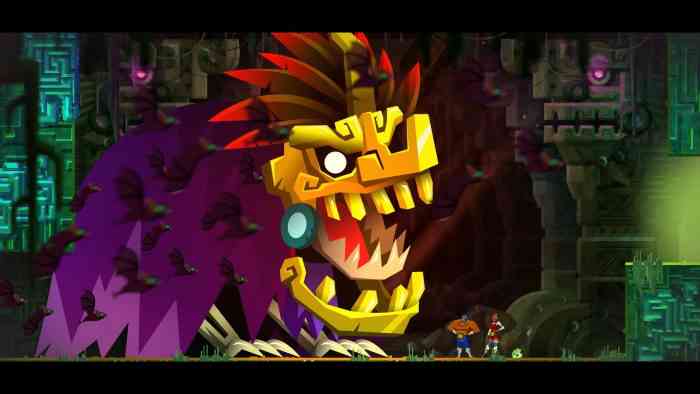 Guacamelee 2! is everything one could ask for in a sequel. It packs in what everyone loved about the original, while building on it enough to make it well worth tagging into the ring for once again. Killer tunes, well-designed combat, and challenging bosses are all high points for a game that had a tough act to follow. It’s also legitimately funny, with its references paying homage to all kinds of pop culture, from Sonic The Hedgehog and River City Ransom, even to the Star Wars themed Luchador called Boba Fight. Guacamelee 2! is a perfect second helping to the hearty offering that was the first title, and fans of the series will be pleased through and through. 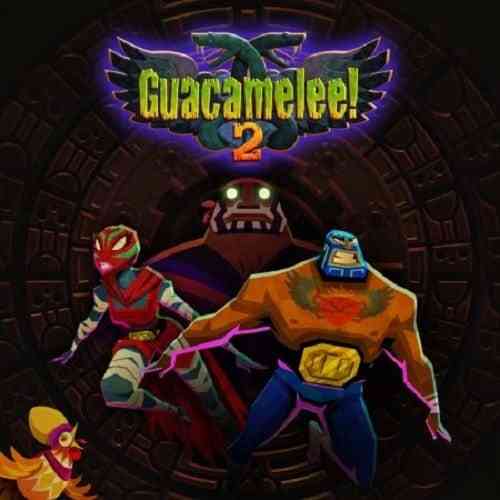