Described as a 2D action-RPG game with platforming elements, Death’s Gambit is one of many such titles to have released in recent memory. While many games are slapped with the “Metroidvania” or “Souls-like” tag, Death’s Gambit’s comparisons to these subgenres are quite apt, in a good way. With its clear inspirations as well as its attractive art style, Death’s Gambit has a good deal of expectations to meet.

In Death’s Gambit, players are placed in the role of Sorun, a deceased warrior resurrected by Death. In order to receive immortality, players are provided with the task of killing all the Immortals. While the story seems quite simplistic in this manner, more about the player and the world are revealed through the game’s playthrough. This is done via flashbacks that occur after deaths, or throughout the game by speaking to other characters. While learning more about the world was intriguing, Sorun’s backstory was less so. While I can appreciate trying to provide players with more knowledge of their character, I cannot help but feel that more emphasis should have been placed on the world and lore rather than the main character.

As a 2D action-RPG, players are able to play as they so choose, with multiple starting classes and various weapons, abilities, and playstyles available. Players will then traverse the interconnected world in search of the various bosses that they are required to slay en route to immortality. While the world is built in a manner that brings unique environments suited to the enemies and bosses, the gameplay is what ultimately determines how a player experiences this environment.

As with other similar games, weapons and equipment available are determined by player statistics and abilities and actions are determined by the player character’s stamina and energy available. As one might expect, statistics such as weapon damage play a large role in the gameplay. However, I have noticed my equipment’s statistics appearing incorrectly, whether it is the variation of my weapon’s damage between my equipment screen and the weapon upgrading screen, or even showing that my equipment affects different attributes between various screens. 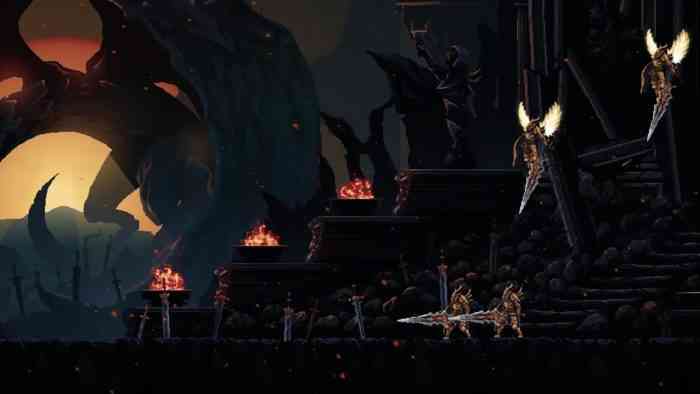 Where Death’s Gambit separates itself from other games is its unique take on healing. Players are given a number of plumes that serve as healing potions that are restored at Death Idols. Instead of using these as healing items, players can opt to reduce the number of plumes available for healing in order to increase their damage output. The title also features permadeath, where players can cancel their contract with Death and become mortal. While this has its obvious downsides, it provides players with a new challenge and way to experience the game.

While the game is focused on taking out the various bosses, some of the areas leading up to the bosses are too short or simplistic, often consisting of just a few enemies. While some of the enemies are tough enough, I cannot help but feel that some of the areas could have been bigger and more fleshed out. Despite some tough non-boss enemies, the overall difficulty of the game is not unfair. Players can also face heroic versions of bosses for greater difficulty. Overall, the combat in the game is quite enjoyable; however; as for the movement aspects of the game, player jumps feel somewhat floaty and climbing ladders can be a bit annoying if you accidentally release pressure on the L1 button.

Lastly, the game suffers from some minor framerate drops, though they are usually infrequent. Despite the framerate drops, Death’s Gambit looks great. From the overall pixel aesthetic to the details of the character, enemies, bosses, and environments, the game meets all expectations. The game’s visual cues, as well as the unique environments, help to tie things together as well. While the game’s soundtrack is adequate, the voice acting plays a strong role in the overall world-building and narrative.

While Death’s Gambit as a whole falls a bit short of expectations, the game itself is a solid action-RPG. The game looks great and runs well most of the time, with a solid challenge that is also unlikely to frustrate players too much. With multiple ways to experience the game, I can see myself returning to the game with a different playstyle. Overall, Death’s Gambit does justice to some of its lofty comparisons, though some more time in the oven would have helped polish the title.


The Siege and the Sandfox Sneaking onto PC in 2023