According to Miriam Webster Online, the word Fandango has two meanings. The first, and more formal definition is that it: “is a lively Spanish or Spanish-American dance done in triple time that is usually performed by a man and a woman to the accompaniment of guitars and castanets.” The second, more informal usage is that of tomfoolery as in silliness, antics, pranks, horseplay… you get the idea.

LucasArts 1998 PC based adventure game, Grim Fandango, leans heavily on the latter definition and uses the former as part of the backdrop of the game’s setting. The major setting of the game is based on the Mexican celebration: Dia de los Meurtos aka Day of the Dead. This celebration occurs every November 1-2 where public altars are set to in remembrance of the recently departed. The altars are colourful displays on which photos, foods, flowers, sweets and other belongings, mementos and offerings to the dead are placed.

It is a celebration of loved ones who have passed on. The focus is on remembering the good times and includes such common symbols as skulls made of candy or clay; known in Spanish as calaveras. Hence the origin of the titular character’s name, Manny Calavera. 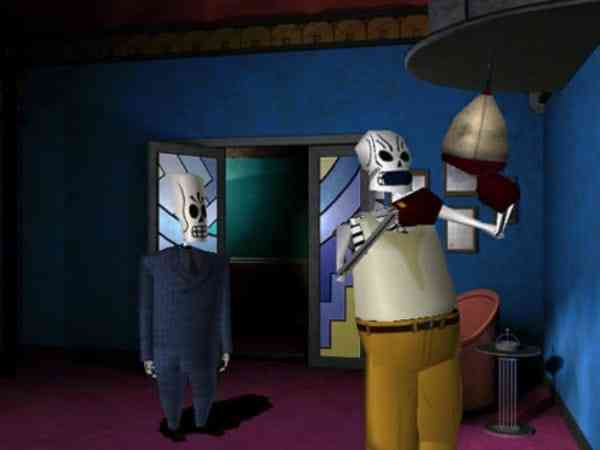 Manny is a travel salesman who helps the recently departed on their journey from the world of the living to the world of the dead. This is not always an instantaneous process but one that can take up to four years depending how well Manny’s potential customers have lived their lives Upstanding citizens are eligible for a fast track train ticket. Less fortunate ones have to slog it on foot through the Land of the Dead. Manny realizes something is amiss and that some people are being cheated out of their travel packages.

With that discovery Manny becomes less salesman and more gumshoe trying to found out who is behind this swindling scheme. So begins the quest of Grim Fandango. An amazing setup and world for an adventure game to take place. In some aspects Grim Fandango is like the Planescape Torment of adventure games. This was one in a series of adventure games that came out during the LucasArts heyday. Sam and Max, Day of the Tentacle, Full Throttle – my personal favourite, and of course The Monkey Island games.

There has been a remastering trend for old PC games which is no doubt partly inspired by the success of Kickstarter games based on classic PC games. Grim Fandango is the most recent to receive such treatment. It is a definite case of fondness colouring one’s perceptions of how great an old game is. Make no mistake, Grim Fandango is a great game but not for its gameplay. No, where this game shines is in its artwork, characters, character design, story, humour, and dialogue. Puzzles in this case are obtuse and often devoid of any logic. Be prepared to reference walk-through guides often. 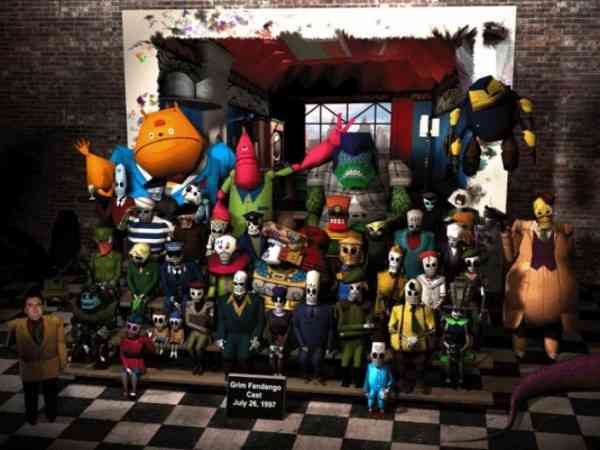 As far as the remastering of the game goes, the touch ups are gentle and restrained. A welcome addition is the option to choose between the original 4:3 ratio or have the game image fill your screen via a 16:9 option. Game backgrounds have been left untouched so the mix of Day of the Dead artwork mixed with Egyptian and Aztec flourishes remains untouched.

A new lighting system has been added which along with the retextured 3D objects makes the game much easier on the eyes. Character models are refined and jagged. Plus they seem more – pardon the pun – alive because that new lighting engine allows them to throw shadows. An optional point and click interface cushions the clumsiness of the original game’s controls. There is also a director’s commentary which points out all the little stories contained at a location.

Not all the old school elements have been removed. There are no autosaves. The inventory system is still clunky as ever. And with puzzles this difficult, a hit system would been most welcome. Modern gamers may struggle or be turned off with these deficiencies. They should not be. Playing the game for solving the puzzles is not where one’s focus should be with this game.

Playing Grim Fandango should be done with the mindset that you are going on a trip. Soak in the world. Be as gregarious as possible. Seek out all the characters the game has to offer. Talk to them and especially listen to them. They will be sure to bring a smile or belly laugh your way if you do. Unfortunately the gameplay aspects of Grim Fandango have not aged gracefully. Even saying poorly is being kind. Yet the world, the characters and stories it contains are still top shelf. Go for the adventure, stick around for the laughs.

***Reviewed on the PS4, code provided by the publisher.***