The Monster Hunter games seem incredibly daunting at first glance. They are huge RPGs with an intense crafting system, complicated mechanics, and boss battles that can last up to fifty minutes. It makes sense that they do not appear to be the most beginner friendly games. You could easily find yourself sinking 200 hours into one just to finish it up. Behind this scary exterior though is a game that is surprisingly easy to understand. All of the daunting aspects come together in a way that is intuitive and enjoyable. Monster Hunter 4 Ultimate (MH4U) is not simply a game for the hardcore gamer, but can be enjoyed by anyone with some time on their hands.

For those who have never played a Monster Hunter game before, here is a small rundown, The series is a 3rd person action RPG game. You play as a hunter and you partake in a lot of quests killing monsters, gathering materials, and upgrading your gear. There is a lot of exploration in each zone and you’ll find where certain enemies live or places where you can harvest different and important materials. There is a good balance between battling and gathering/crafting. The battle system is fun but it does require you to pay attention to your enemies to see their weak points or dodge their incoming attacks. There are no health bars for monsters either, you just have to pay attention to the way they are behaving to know if they are close to death or not.

The story of MH4U has you arriving at Val Harbor where you are enlisted by the Caravaneer to join his caravan, and along with a few other members you embark on your journey. You actually go to multiple towns, like the bustling Val Harbor or the volcanic Harth, and do quests in each place to further the story. Of course the story is not the only reason to play Monster Hunter, and while it is cool to your actions making progress for your group and how the story it leads you to different places, it ultimately can’t distract from the real fun of this game: hunting monsters. 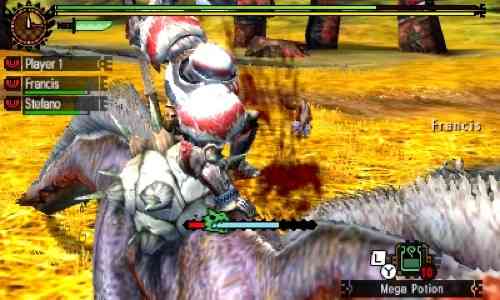 Simply put, hunting is the best part of the Monster Hunting games. The actual hunt has not changed dramatically from past generations, but the additions are interesting. This version has removed the water battles found in Monster Hunter 3 and added more verticality to the levels. You can scale walls and actually jump off cliffs to land on and mount the different monsters. When mounted you can damage the monsters while trying to not get thrown off. This mechanic is fun at first, but ultimately it seems to add little to the gameplay. The verticality though adds a lot of depth to exploring each zone.

Besides hunting down giant beasts for sport there are also gathering quests in MH4U. These quests are good downtime between the epic battles the game provides, and they are also necessary to further your character’s experience and abilities. The intense crafting and upgrade system requires you to go out and fully explore each zone to get the different materials you need to make armor, weapons, potions, and more. The game tells you exactly what you need for each upgrade so it is not a chore to figure it out. These quests are more relaxing and allow you to recuperate after spending close to an hour finishing off that last monster!

MH4U has added a slew of new monsters and two new weapons: the Insect Glaive and the Charge Blade. The Insect Glaive is a large polearm type weapon with a very interesting mechanic in the form of an insect ally called a Kinsect. You can send out your Kinsect to harvest an extract from the enemy to boost your character. There are four different boosts and you can overlap multiple boosts at one time. They are temporary so you have to remember to keep them up throughout the battle. The Insect Glaive also offers a vaulting attack where you push yourself into the air, which can be used to mount monsters without the need of higher ground. This is one of my favorite weapons so far. The Charge Blade can switch between “sword and shield mode” and “axe mode”. In “sword and shield mode” the Charge Blade gathers energy with each attack and can also use the shield to block. In “axe mode” you use that energy to unleash powerful attacks at the expense of some defense.

Besides the two new weapons MH4U includes all your favorites: like the long sword, sword and shield, bowgun, and more. There are many weapons to choose from, each with a very distinctive gameplay difference. Each weapon has its own special abilities and each feels very different. Dual swords attack very fast and allow you to enter “Demon Mode” where you can fill a gauge with each attack and when it’s full you are able to dodge attacks better, but Demon Mode saps your endurance. The gunlance on the other hand is a much slower attacking weapon, which includes the ability to fire a shot at your enemies. Each weapon you find or craft in game really has its own flavor and trying each one to find one that works for you is very enjoyable. 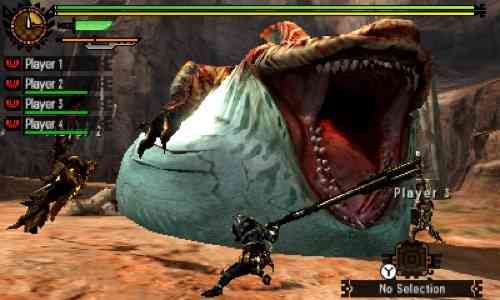 This is the first Monster Hunter portable game to feature full online co-op. The hub of online activity is a building called “The Gathering Hall” which is where you go to initiate or join a quest with other players online. You can prepare items and equipment from inside the hall and even get the power ups from eating your pre-quest meal (cooked for you by a lovely cat). The game also features a StreetPass system where your trusty sidekick the Palico (cat with a weapon) can be sent out or received from others. I was unable to try this function, as the game was not yet released to the public.

I have to comment on the game’s control. As I was playing on the regular 3DS XL, as opposed to the new one, I only had one analogue stick to work with. The analog stick controls your character and the D-Pad controls the camera. See a problem? You can’t control both at one time, as they are both on the left side of the system. You can press L to set the camera directly behind your character or set it up to target the monster you are fighting, but that isn’t always the angle you want. This isn’t a huge problem, but at times it can be a little bit frustrating. Thankfully the “New 3DS XL” alleviates this problem by adding a secondary analogue stick on the right side of the system. (See our video review of the “New 3DS XL” for more information)

Gameplay is largely unchanged from previous iterations of the series, with a few well-received additions. The single player and multi-player aspects of the game are intertwined and further your character both ways. This game is still enjoyable if you can only play single player, but the multiplayer hunts are well worth finding some people to play with. Of course, like other Monster Hunter games, you could easily find yourself playing this game for a long time, as I mentioned earlier, for over 200 hours. The tutorial alone is around 6 hours long before you are able to really do whatever you want. 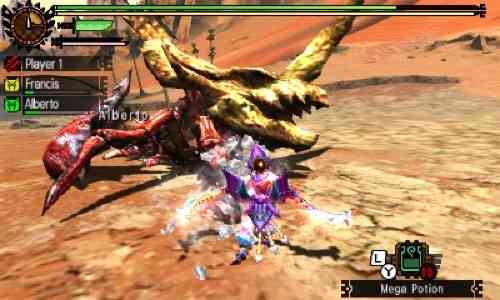 The graphics in MH4U are exactly what you would expect from a 3DS game and they are solid for the system. They aren’t terrible, but of course they could be better on something like the Wii-U. They are colourful though and I didn’t see too many technical issues. I am personally not much a fan of the 3D features of the 3DS but I did use them for a bit in this game. The entire game is in 3D, unlike a game like Pokemon X/Y where only battles display in 3D, and I found it hard to concentrate on what was happening. The 3D requires your head to be in a very precise location or the picture goes fuzzy, and in a game like this I couldn’t afford to lose sight for even an instant during some of those tricky battles. This is another problem that will be solved by the “New 3DS XL” and it’s “Super Stable 3D” which monitors where your head is and actually keeps the image stable.

The cinematics in MH4U are some of my favorite parts of the game. They are expertly crafted and look gorgeous. One of my favorites is when you pack up the Caravan for the first time you see each member’s piece of the caravan fold up and wheel off. The cinematics are really well done and entertaining. The opening cinematic really sets the stage for an epic adventure about hunting monsters both alone and in a group. It gets you excited about jumping into this game!

The soundtrack of MH4U does a good job of conveying the mood of the game. It is epic and helps the game feel like a real adventure, even if the music is just on in the background. The sound effects are satisfying. When you strike a monster it sounds, and feels, like you really did damage it. The 3DS speakers do a great job; put on headphones though and BAM, great immersion. A bad sound effect can really confuse a player as to what he or she actually just accomplished, but MH4U does not have that problem.

***This game was reviewed with a code provided by the publisher***