The first time I heard about Team 17’s next game as a publisher, The Escapists, was through a friend on Xbox Live who happens to be a correctional officer himself. He mentioned it in passing and he told me that a friend of his was super excited about the game. That excitement rubbed off on me and when the game was offered up to us at the review team here at COG I quickly volunteered, because who doesn’t want to try and escape from a prison, especially when it’s in a digital world, nice and cozy like… and SAFE.

Jumping into the game you’ll immediately notice the old school graphics from the NES days. This is as fancy the graphics get, which seems to be a growing trend for smaller developers as a whole as they focus more on gameplay rather than having top end visuals. I don’t mind this approach as long as they do make the game fun. A nice feature is the limited ability to customize the guards and prisoners in the game. You can rename everyone and there is a random generator of sorts of how the character will look, but there is nothing that you can use to fine tune how a player will work in the game. In my case I re-created my correctional officer friend as, you guessed it, a correctional officer, which obviously creates some awesome stories of when he gave me a few virtual beat downs in the game. Aside from the nostalgic feel of the graphics, the look as a whole is polished and you can tell what’s what from exercise rooms, televisions, shanks, bricks and all that fine 8-bit brick goodness. 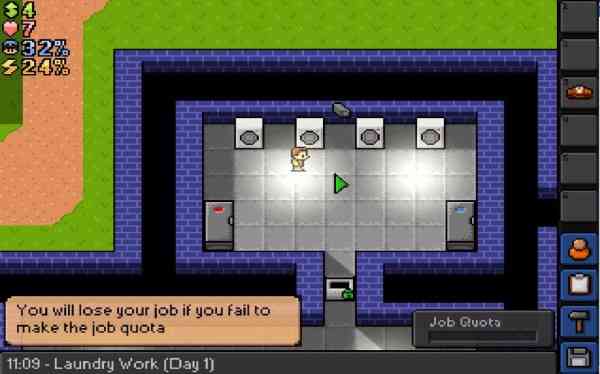 Continuing on with the old school feel, the music backdrops nicely and creates the perfect atmosphere of imprisonment; however, there isn’t a whole lot of variety, which makes complete sense with the monotony of prison life. Of course there are great little 8-bit sound effects of fists pounding into inmates as they get beat down, the clunk of hammers hitting walls or a screeching sound as screwdriver is used. This whole little package of 8-bit joy is well crafted and brings you back to the days when you thought blocky graphics was absolutely amazing.

As I indicated earlier, the whole point of the game is the escape from prison, and it’s a lot harder to do then you might expect, as you have to execute your plan flawlessly. My first few attempts ended with quite a few roadblocks and failures. First, I moved a desk to a vent and with my stolen screwdriver I undid the vent grate so I could travel through the prison. However, because I didn’t craft a paper grate to disguise that I had removed the original grate I was quickly caught. Working in the laundry room I thought I’d steal a freshly laundered guard’s uniform, but when I tried to take it out a contraband detector quickly had the guards relinquishing me of the uniform while giving me a concussion or two in the process. After the few attempts I made escape the guards became a little wary of my actions and I also made some enemies along the way as I gave out various beat downs to acquire materials to aid me in my attempts to escape. After a while everyone pretty much beat me down every chance they could get so I decided to start over and try a different approach.

One of the things I did learn through all the failed attempts though is more about crafting items in the game. Every time you fail you are given a clue of something you could have crafted to make your escape a bit easier. For example, two pieces of paper help you easily craft a fake grate, a file and a hunk of wood will make a door handle, or a couple of pillows with a bed sheet crafts a bed dummy, and there are more. The crafting possibilities are endless and when you do figure something out it is logged into your journal for future reference. As a side note, piecing stuff together to make the tools you’ll need is a lot cheaper than having to work your way through jobs and favours for inmates to earn money to purchase the items you need. 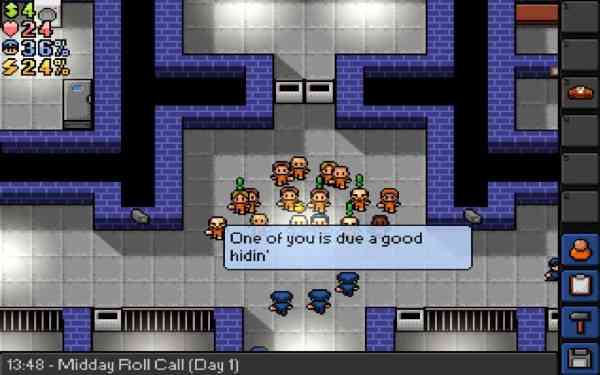 So, with my new knowledge I jumped in a second time where I kept to the daily routine of roll call, breakfast, free time, work, exercise, dinner, free time and roll call. Keeping to the routine definitely keeps the guards off your back as they come to believe you are a model inmate who is just serving your time. One of the best ways to get materials, and to keep the guards and inmates from beating you down regularly, is to wait for someone else to get beat down and when no one is looking loot the unconscious guard/inmate for components to craft something useful. If you are really daring you can take your time leaving for roll call and sneak into a nearby cell and check it out for any items you might need.  Of course there are inmates inside the jail who can find your components, tools, food, etc. to help you with your escape but you’ll have to be able to produce the cash to buy the items. Money is earned by doing prison jobs like laundry, mail room, janitorial duties, etc. or by doing favours for other inmates like acquiring certain items, delivering beat downs to guards/inmates, causing distractions or stealing items back from fellow convicts.

There are so many different ways to break out be it constructing tunnels, escaping through vents, and even using a guard’s key and uniform to simply walk out. There are so many other variations and combinations that each level can be played differently each time you replay it. As of right now there are six prisons you can break out of but I am sure there will be some future stuff down the road. I do wish that The Escapists contained an editor that allowed you to build your own prison (hint, hint boys!) for other players to try and solve. Regardless, each prison you progress through in the game gets a bit tougher and really challenges you to think outside of the box as you plan your escape. What is immensely enjoyable is how it makes you think everything through rather than jumping in full tilt and figuring it out on the fly.

The Escapists is a great game that doesn’t bust the bank and will give your hours of enjoyment as you plot, craft and deploy your plans for your great prison break. I could find little wrong with this game even with the old school graphics, which may not be everyone’s cup of tea, as they don’t distract from how fun this gem of a title it is. Keep in mind though if you don’t have a whole lot of patience this game may not be for you as there are times that you have to do mundane things, which is a gameplay style that isn’t for all gamers.