Golem Gates takes the RTS and CCG genres and mixes them together, creating a hybrid game that combines on the RNG of deckbuilding and the strategy of RTS games. Whilst it was an interesting combo that I haven’t seen before, the outcome was a bit hit and miss.

To start, having most of the plot unfold in the latter half of the story was a bold move that doesn’t really pay off for Golem Gates. In the beginning, we’re thrown into a story that’s already underway, and we aren’t given any chance to catch up. All we know is that some apocalyptic event has left the world desolate and overrun by machines, and these machines are controlled by ‘Golem Gates’, which in turn are used by those who can manipulate a substance called ‘Ash’ to create and control these machines.

You play as the Harbinger, a powerful being who also manipulates the Ash to create armies of machine minions, but your task is to eradicate these Golem Gates and the corrupted tyrants who are manipulating the Ash for nefarious reasons. Guided by what looks like a talking sun, you must travel through the barren wastelands across 15 missions to destroy the Golem Gates, and these tyrants who are using them. I felt the odd pacing didn’t leave time to properly introduce and flesh out the main enemies, going from introducing the main enemy of the chapter to killing them within a couple of missions, with only a few brief expositional chats between each mission.

I also thought the world that Golem Gates had created to be interesting, but it left me wanting to know much more about the apocalyptic event that happened previously, and the events that led up to these characters being such evil tyrants. Confusing story aside, the gameplay for Golem Gates was surprisingly fun. It combines elements of real-time strategy games and collectible card games, which are surprisingly effective when combined, and makes for a decent amount of fun when your deck gives the cards you want.

The actual fighting is done by the machines I mentioned. You summon them using glyphs, which is Golem Gates’ term for cards and control them in your standard RTS, click-to-move style of gameplay. Alongside the fighting units, you can summon defensive structures, traps, or structures that provide buffs to surrounding units. These units can be spawned anywhere across the map, so long as you can see them, like the Protoss from Starcraft. This change allows you to drop units right into the thick of it, instead of building up an army at your base and sending it out in a big wave, adding another layer of strategy to the battles with the option of dropping in some ODST’s to save your armies from the jaws of defeat.

Each match/level gives you a total of five glyphs in your hand, and you can swap out the ones you dislike. The cards given to you are dependent on your deck, which you’re allowed to customize from the start, but like every other CCG, it’s all down to the luck of the draw. You’re allowed to add as many cards as you’d like to your deck, but once you’ve drawn each one you need to re-shuffle the deck, which leaves you vulnerable and unable to move units for fifteen seconds; though they can still defend themselves. Cards are only earned through the completion of missions, or using an in-game currency to forge cards; there isn’t a single microtransaction to buy more cards.

Once the match begins you start to accumulate more cards over time, as well as energy. Energy is shown as a bar at the bottom of the screen and is what you spend to summon your glyphs. Energy is capped at the beginning of every match to stop you from summoning your strongest units immediately, but letting the energy bar fill up and overflow increases the overall length of the bar, and thus how much energy you can hold. You can speed this process up, however, using power generators. These power generators are a king-of-the-hill style building where the owner is whoever stood in it for the longest time and can be stolen by your enemy if you aren’t careful. Most objectives in the game utilize this premise, and so most matches have you holding several positions at a time, fending off waves of enemies from a captured structure. I found it to be pretty repetitive towards the end of the game, with each level being different variations of ‘Hold and defend X/Y/Z for a set amount of time to win’, but I liked the small addition of the re-shuffling mechanic, which I felt added yet another layer to the way I strategized and placed my units. 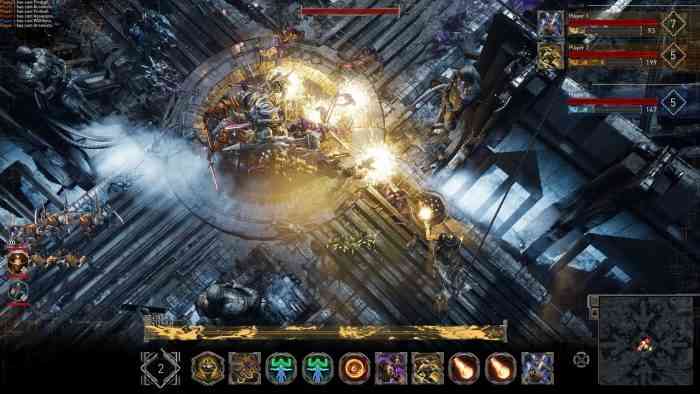 The ‘luck’ side of the CCG RNG is more dependent on a player’s deck size, so I had no real issues with being constantly unlucky and having that ruin my game. I rearranged my decks with most missions and kept a low number of cards so I could reshuffle as often as possible. For a game where you spend most of your time as high up in the sky as possible, the game looks surprisingly pretty for a post-apocalyptic wasteland when you zoom in to get a look at the action, and I felt the UI fit in nicely with the robotic look the game is going for. The bleak colors of brown and grey were occasionally contrasted by the bright gold shimmering your units gave off when they’re spawned in. The spell effects all looked awesome when I’d call them in to wipe out an oncoming enemy wave, with my own lads occasionally getting caught in the crossfire, and the individual troops all looked interesting and as pretty as robots could. Looking as nice as it does, it ran relatively well when huge armies would duke it out on the map. However, on a few of the later missions, the game would stutter and lag immensely, even on the lowest graphics settings. It wasn’t a game-breaker for me, but it made the entire mission a drain to play through.

To try and shake up the gameplay, Golem Gates has a trials mode where you’re given a series of levels to beat, each with its own individual premise. A few of them had very interesting premises, it still had plenty of the ‘Hold this to win’ maps sprinkled in. While this didn’t exactly take away from the fun of the levels, I felt like there was only so many I could do in one sitting. There’s also a multiplayer side of the game that lets you play a 1v1 duel, 2v2 matches, and 4 player free-for-all. The maps for each type are varied, but the main objectives stay the same; eliminate the enemy Harbingers.

You’re allowed to bring your customized deck from single-player over, which meant I had a few powerful cards from the get-go, but that never really mattered as I couldn’t find anyone to play against. There is an option to play against AI whilst you wait, which is the only way I saw the multiplayer maps in the first place. There is also a co-op survival mode where you and another Harbinger team up and survive for as long as you can against waves of enemies for a set amount of time, with it getting harder the longer you survive. This I really liked, and was probably my favorite part of the game, mainly because it felt like there was something else to do outside of ‘Hold X to win’. 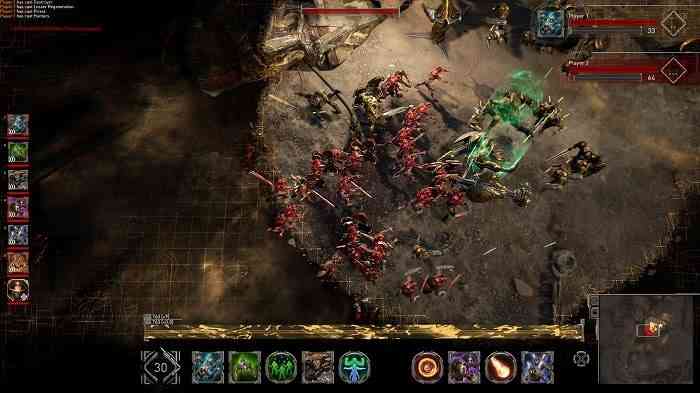 Whilst Golem Gates isn’t without its flaws, it does enough right that I enjoyed the what the campaign gave me. The repetitiveness of some missions didn’t make them less fun to play, but after I’d completed a few in a row I was ready to play something else. It takes a few old formulas and flips them of their heads, but it could use a few more twists.