Gift of Parthax Review – Could Have Been Magically Mystifying

Gift of Parthax, the new 2-D action-arena game developed by Foldergeist Studies, revolves around a young wizard whose friend Veleus has been cursed by the mage Parthax. With a pixelated art style reminiscent of games of yore, this brawler drew me in through its simple and promising premise and brings a fun time even if it doesn’t always live up to its presentation.

The game really is simple. There’s a Hall of Preparation where you can buy runes and potions (and visit your poor cursed friend), and there’s an arena where you use those runes and potions in glorious combat. Plot wise, there are bosses at the end of every “season” that are more difficult to beat than the rest of the levels in that season. A variety of enemies can attack and do so, usually all at once, requiring you to be somewhat savvy in your dodging as you run around the stadium with your little pixelated feet.

At its best, Gift of Parthax can be incredibly fun when you’ve got the right spells loaded into your inventory and the right runes attached to them. The customization of spells is pretty fun, but the game leaves a lot out when it comes to how to use the runes, and I spent the first quarter of the game trying to figure out what I was supposed to do with them. One you get it all together, though, it can be immensely satisfying to launch a fireball and kill five enemies in one go. When you survive a tough scrape with your health bar at empty all because of your strategizing, it feels good. It just takes a lot of trial and error to get there. 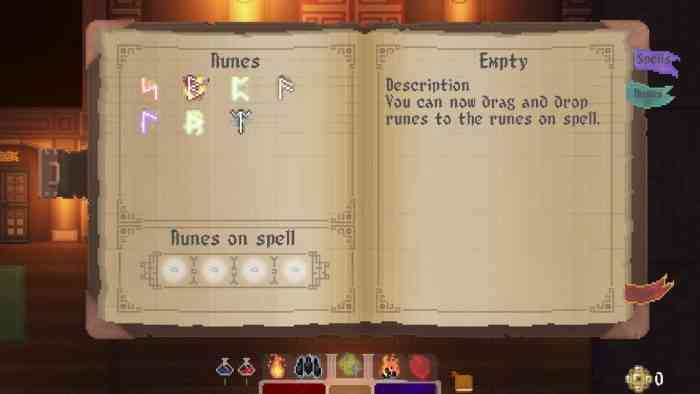 Once you get to the Fall season, the game becomes a lot less immediate and starts becoming much more grinding-based. You level up in Gift of Parthax based on “knowledge,” but unfortunately it’s unclear to the player that they’re doing so because the game just says “mind expanded,” and doesn’t give you any additional knowledge like, for example, what that leveling up might actually be doing for. Because of this, the game’s difficulty rapidly increases at the same rate as your boredom when you’re forced to grind the early levels over and over to get higher levels on an invisible scale. Some of the archspells, the big hitters, don’t feel as satisfying as they should, either, and the spells can range wildly in their impact and usefulness.

Story-wise, there isn’t much more than I’ve already told. There’s a sick wizard and a healthy wizard and occasionally some lore that’s so exposition heavy that my brain threatens to ooze out of my skull when I try to read it. The soundtrack is great to the exclusion of all else—if there are many actual sound effects I can’t think of any. However, the music really does leave a strong positive impression, and the pixelated art has the potential to be beautiful, as seen by the loading screens, but it’s mostly wasted on an arena that, for the most part, stays the same.

For those who love action-arena games like Gift of Parthax, this game will likely delight, as the pixelated characters are nostalgic as hell and the combat, when leveled properly, can be that right mix of challenging but fun. Unfortunately, for those more casual about the genre, Gift of Parthax doesn’t offer enough to offset painfully unbalanced seasons, the grinding that results, and a leveling system that’s as mystical as its characters.

Shiny Review – Not Bright Like a Diamond
Next 8-Bit Armies Review – Mine, Craft, Command, and Conquer
Previous Wandersong Review – The Little Bard Who Could