Wandersong Review – The Little Bard Who Could

At PAX West 2018, we here at COG previewed an indie game called Wandersong, a bright, fun adventure game that came out for PC, Mac, and Switch on September 27th. At PAX we thought the game was promising, but little did we know that the short demo hid one of the most compelling storylines of this year.

Wandersong revolves around the life of a little bard who discovers, through the magical emissary of the all powerful creator, that the world is ending. He decides to learn the Earthsong, which can save the universe if sung in harmony with the whole world, but must go on a quest to find seven pieces of the song from the Overseers, beings that watch over the world and live in the spirit realm. Joining the bard is Miriam, an irritable witch who begrudgingly joins forces with our protagonist. The bard and Miriam travel the world in their quest and meet dozens of interesting characters, some who bring genuinely shocking and heart-wrenching twists to the story as they discover that the Earthsong isn’t what it seems.

The narrative is vibrant and lovely, spanning so many different aspects of life, from the effects of industrialism in the town where the bard’s mother lives to the consequences of meaningless war between two torn nations. Oh, and pirates who love coffee and just won’t stop singing about it—the usual.  The art and graphics of the game go hand and hand with the story, bringing the bard and the people around him to life with fantastic colors and character designs that highlight the diversity and individuality of the places the bard visits.

The Color Wheel of Music

There is an element of synesthesia in the controls of the game, as the bard interacts with the world through a color wheel that translates to difference notes on a scale. There is no traditional monster-fighting for the bard. He doesn’t carry a sword or shoot arrows Legolas-style as he skates down a banister. It’s all singing for him, and his notes are expressed both in music and in colors that keep the game beautiful to look at, especially with some of the different level designs. He’s a little like if Link only used his ocarina and had a reputation for never closing his mouth instead of never opening it.

The challenges vary between helping and hurting this immersion. Some of them, like a late-game adventure into the darkness that is only alleviated by beams of light that spread from your singing, made playing Wandersong visually stunning. Some of them, however, had me slamming keys in desperation. When I demoed the game at PAX, it was on a Switch, but having played the game through on PC, I can tell the game suffers control-wise when it comes to the latter.

There were too many instances of serious frustration that resulted from the combination of a tricky jump and poor controls, and the color wheel never felt natural for a keyboard and mouse. At one point I had to lower the frame-rate and take the game into windowed mode just to progress, which was made especially annoying because I so badly wanted to return to the excellent story. The color/singing wheel felt much more natural on a Switch even in the short demo I played, and I was ever conscious as I stumbled through puzzles that I wasn’t having the optimal experience.

The music really is the highlight of this game. While the controls sometimes make it hard to hit the right notes, the soundtrack always stepped in to enhance the game, and the bard’s world was fully believable as he sang his way through, around, and under his problems. The sheer variety of different ways song is utilized in this game is impressive, with music being used to sing to ghosts, light the path, connect to the spirit realm, soothe monsters, break spells, manipulate time, and a host of other things I’ve already forgotten. Some of them work better than others (I adored the one where you moved around a map through singing with pirates and wanted more of it), but I fully admire the dedication to providing a varied, interesting gameplay experience. 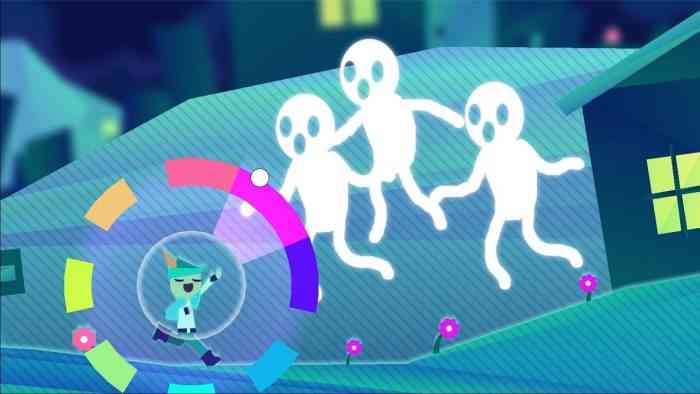 Wandersong can trace its lineage clearly through other thoughtful indie games and pieces of media and belongs in the same spiritual family as Homestuck and Undertale when it comes to story and design. The story, bright and cheery at first glance, brings a real sense of meaning in the later acts of the game, and the humor in the characters’ dialogue is witty and often savage in the best sense of the word. The main characters aren’t the only fleshed out people, and many of the side characters have their own lives and arcs to go through, with some standouts being the band in Delphi and the princess in the warring kingdoms.

I have absolutely no complaints about the story: I only wish the gameplay always kept up with it. Frustrating moments often surfaced at bad times due to poor controls which made actually playing the game less of a fun experience, and I’d love to give this game a go on the Switch, where the singing goes smoother. Wandersong also feels a little long, not because the story gets boring, but because the puzzles can get a bit repetitive. However, the strength of Wandersong is such that these complaints feel pale in the face of the kind of relentless optimism that the bard has in spades. Get out your guitar and strum along to this one, because Wandersong brings a fun, meaningful story fully grounded in a colorful world that’s worth saving.

Valorant Devs to Fans: ‘Bear With Us Until Next Week’
Next Gift of Parthax Review – Could Have Been Magically Mystifying
Previous Super Seducer 2: Advanced Seduction Techniques Review – A Mixed Bag of Cringe