Ghostbusters: Spirits Unleashed Review – We Got One

Ghostbusters is a franchise powered by nostalgia. The seminal 1980s comedy film about blue-collar paranormal exterminators still thrives within the collective consciousness. Beyond its sequels, toys, and Saturday morning cartoons, the franchise has been adapted into a handful of video games across numerous platforms. The latest is an asymmetrical multiplayer game by Illfonic, the developers behind Friday the 13th and Predator Hunting Ground.

We’re Ready To Believe You

In the Ghostbusters timeline, Spirits Unleashed takes place after the events of Ghostbusters: Afterlife. Winston Zeddmore wants to revive the paranormal exterminator business and needs help. As the newest hire, you’ll have access to all sorts of ghost-busting tools, both new and old, to tackle the city’s spectral menaces. Your avatar is built from the ground up using a myriad of cosmetic options, many of them initially locked out. There are a lot of different outfits and accessories to play around with but Ghostbuster purists may find that no combination of tops, bottoms, and headgear could ever beat the iconic brown jumpsuit and goggles.

After finalizing the initial character design and working through a short tutorial, you have free reign to fight ghosts either by yourself (with bots) or with three other human players. The firehouse headquarters serves as a central hub to modify equipment, change outfits, accept side jobs, conduct research, and converse with NPCs. Chief among those: Ray Stanz (voiced by Dan Aykroyd), operator of an occult book store conveniently located next door.

As a Ghostbuster, the goal of every job is to capture the ghost. Sessions take place within prime haunting locations, like a disused prison, a hotel, a museum, and a cruise ship. Using the PKE meter, players will need to track the location of the spirit within the level. Confusing the device’s tracking is the ghost’s ability to haunt random objects and throw its pursuers off the trail. The PKE can be used as an offensive tool. When you’re close to a ghost or suspect it might be possessing an object, the device can fire a proximity blast that briefly stuns the ghost. 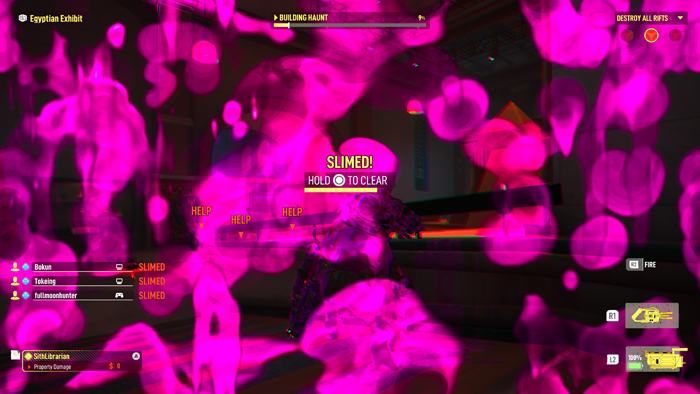 Trapping ghosts works as it does in the movies, by blasting them with proton streams until they form a tether. The ease of grabbing a ghost depends on the type, as some are harder to wrangle than others. Once the ghost is tethered, you’ll need to steer it toward an open trap before it has a chance to escape. Spirits Unleashed does not reward lone wolves. There are mechanics in place that make working as a team essential to capturing a ghost. Venting proton packs, dropping traps, and gadget battery life can cause disruptions that give the ghost a window of opportunity to escape. Playing against bots is one thing but going up against a human-controlled ghost that knows what it’s doing poses a significant challenge.

Completing jobs rewards experience points towards character levels that unlock new cosmetics and, eventually, special research projects. Gadgets level up with use and unlock new attachments that have positive and negative effects on mechanics such as charge time, tether strength, and venting speed.

Playing as the ghost offers a truly unique Ghostbusters experience. You must avoid the exterminators long enough to completely haunt the level. You can evade capture by possessing random objects—chairs, boxes, wet floor signs, etc—and hide out as the other players walk past. Although equipped with tools to pinpoint your location, you can confuse the PKE meter by triggering haunts on these same objects. This also sets you up to sabotage a player’s Proton Pack, disabling them long enough to escape and continue with the haunt. The trick to a successful haunt is staying on the move, scaring citizens, and haunting the environment along the way. Scaring people enough to make them flee the building earns a significant boost to the haunting, which puts further pressure on the human hunters. 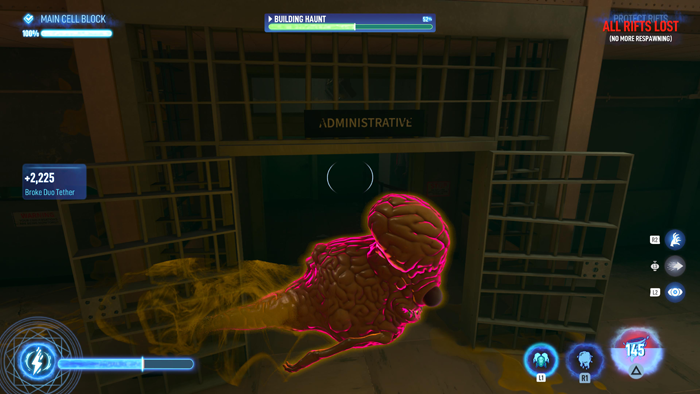 Ghosts can summon minions, shoot wads of slime, and launch massive area-of-effect attacks. And yet, they’re still fragile. Since ghosts cannot kill Ghostbusters, their motivation is to avoid them long enough to haunt all rooms in a level. One of the more dangerous things to watch out for is when the Ghostbusters discover Rifts, tears that function as the ghost’s respawn points. There are three rifts connected to artifacts destroyable by the other team. Closing rifts limits the number of times the ghost respawns after being trapped. You can move these artifacts to different parts of the level to make them harder to find.

If you can survive long enough to earn a 100% haunt rating, the game enters a final countdown, giving the Ghostbusters a final chance to hunt you down. The ghost wins the haunt if the exterminators fail, ending with a fun cutscene of the humans frantically running away.

Tell Him About The Twinkie

Ghostbusters: Spirits Unleashed is a fun take on the 4v1 concept. I wish it was more like Left 4 Dead in form and function but Illfonic’s approach grew on me. As interesting as it is to be the ghost, I can see myself having fun with three of my friends as the Ghostbusters. Human or ghost, there are a lot of variables that make the game tense and challenging. That said, I had a lot of sessions that were wildly inconsistent. It boils down to what kind of players you’re up against. I’ve been in games where the humans do nothing but target the rifts, giving me, the ghost, little to do. As I am mostly powerless to stop them, all I could really do is work on my own to haunt and scare until I’m mobbed by the other team. 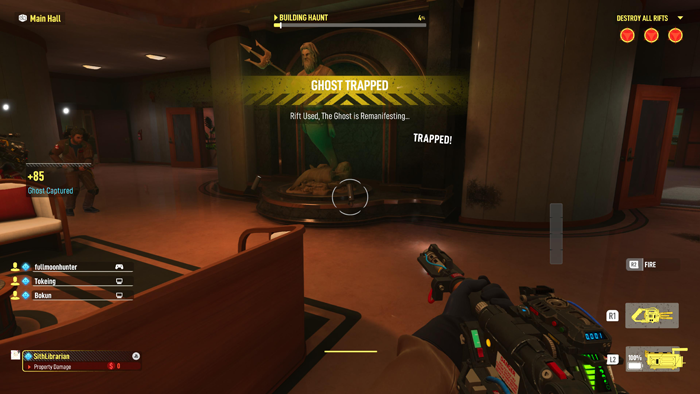 If the idea of playing against real humans intimidates you, Spirits Unleashed has an offline Single Player mode. The only problem with this is that the bots are not very smart. Especially the ghost. I watched in utter disbelief as the ghost in bot matches makes no attempt to avoid the humans. It would just float along a simple path with little care for their well-being.

Presentation-wise, Spirits Unleashed falls a bit short for me. The game’s character models, even Winston and Ray Stanz look like they fell out of the Fortnite bus. At best, they look like unused toy concepts. Ray, for example, barely resembles anything close to Dan Aykroyd. It’s weird hearing his voice come from a digital character who looks nothing like him. Although this is a Ghostbusters game, it doesn’t quite have the same charm and cinematic spark as the 2009 game (and its remake). The fact that it doesn’t even use Elmer Bernstein’s score, or even the classic Ray Parker Jr. theme song, makes the experience feel especially hollow.

Call It Fate, Call It Karma

Ghostbusters: Spirits Unleashed runs $40 on your platform of choice. That feels steep. Weapon and gear upgrades are worth getting if only to make them more effective in the field. Cosmetics, though, barely register on the excitement meter. Hats, bandanas, knee pads, and numerous color options feel really pointless given the first-person perspective. During a job, you don’t have the time to really care what other people are wearing. In my mind, the only cosmetics worth the time to acquire are from the ghosts, as each type has several different versions to unlock (including the green ghoul himself, Slimer). 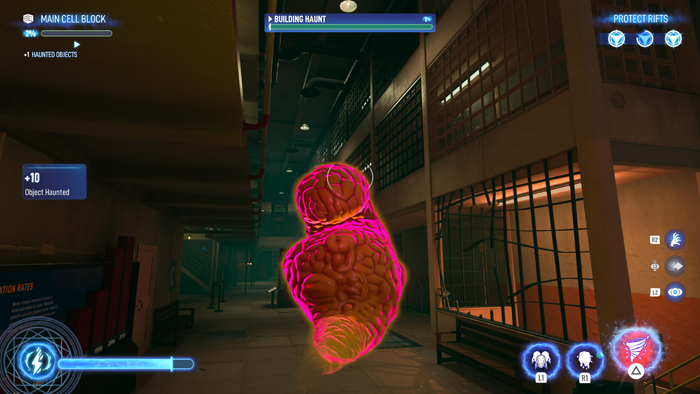 Ghostbusters: Spirits Unleashed is a great fit for asymmetrical multiplayer. I’ll take any chance to engage with a film that made a huge impact on my childhood. Also, the film lends itself very well to this style of gameplay. My hope is that future support includes new content. I’d love to see maps set in iconic locations, like the Sedgewick Hotel. Additional ghosts and equipment (like the pink slime gun) would be great, too. There’s a solid foundation to work with and future plans would go a long way to keeping the experience fresh. 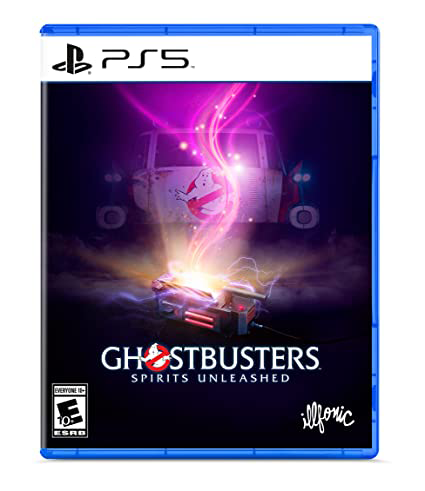