I imagine virtual reality, at its best, to be a liberating experience – something that allows me to shed the restrictions and confines of my physical reality and see and do things that I would never otherwise experience. By this measure, Ghost Giant on PSVR from developers Zoink Games, is a very good game. It certainly offers you immersion into a beautiful world with a magical, fairy tale-like quality, full of fascinating anthropomorphic characters. You play as quite literally a ghostly giant, but a benevolent one who exists to help the young cat/boy protagonist, Louis, do what he needs to do and get where he needs to go as the story unfolds.

The settings change with each “chapter,” but they are always some sort of diorama that you look down upon, complete with miniature houses, farm fields, roads, vegetation and characters, many of whom are living, talking, sleeping or eating inside the little houses and you can even bend down and look inside the windows to see what they’re up to. Despite the fact that everything is created in a bespoke paper cut-out visual aesthetic, the world of Ghost Giant feels wonderfully alive, organic and immersive, and the 3D effect only enhances that impression.

A less successful aspect, in my opinion, is the way the game plants you, like a tree, in one spot throughout each chapter – you may use your ghost arms to interact with objects, like poke or lift them, but your lower body remains stationery. My reflexes kept pushing me to try and move around, change my point of view, but that was not an option, and that is something I never quite got used to. I understand the “choice” the developers made here in their gameplay mechanic but I just couldn’t shake the weird feeling of being confined as I played. 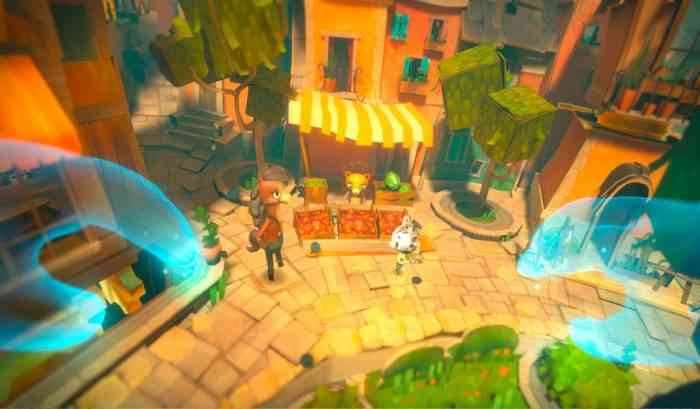 Ghost Giant is interactive but only to a point. You assist cute little Louis LaFleur by manipulating the environment in ways that his diminutive self cannot; you might have to lift an automobile onto the road for him to drive, or obtain a key and then pull open a door for him. These are puzzles, in a way, but I never found that they tested my brain very much, especially since there were only so many things available for me to manipulate in each chapter. This was, of course,  disappointing from an immersion standpoint, taking me out of the illusion since some things were obviously mere background, and others felt more “real.”

Controlling the game is done with 2 PlayStation Move controllers – as always, a fact that brings its own challenges. The Move is not the most precise tool at times, and so grabbing and turning and so forth often require multiple attempts. The tracking of the PSVR is a bit of an issue with most of its games, and Ghost Giant is no exception. However, I think the developers made a smart choice in limiting your choices of manipulation to two ways – grabbing and poking – which minimizes the potential for issues as you play.

Right in the Feels

Ghost Giant is at its strongest in its narrative elements. You see, despite the fairy tale presentation, little Louis’ story is not completely a happy one, and it is quite melancholy at times. The unfolding tale brings in big emotional themes like depression, and I was not prepared at times for the sentimental impact Ghost Giant would have on me, especially by the end. That’s in large part due to the excellent production values, including the superb voice acting, music and writing that made me truly care about Louis but all of the many secondary characters in the story. At maybe 4 or 5 hours in length (depending on how long you spend looking for extra items like hats sprinkled about) Ghost Giant is not a long experience but definitely an impactful one.

Overall, Ghost Giant is not about great gameplay – the object-manipulation tasks are standard VR fare and only really serve to move the narrative forward. But oh, the narrative. The trials and tribulations of Louis and the rest of the denizens of little Sancourt will tug at your heartstrings and leave you thinking about them long after playing. Strap on your PSVR headset and definitely check Ghost Giant out, but be prepared to stop and wipe your eyes more than once.


The Persistence Review – An Exercise in Tenacity

VR Headset Sales Have Skyrocketed Since the Release of Half-Life: Alyx