Having a video game released during a worldwide pandemic called “Gerrrms” allows for a ton of jokes to be made. Which obviously I am too good to do. Thankfully, this game takes a lighthearted, cute approach when it comes to its style and gameplay.

At the core, Gerrrms is a battle royale-style multiplayer brawler that features, what else? Germs. With up to 4-players either locally or with CPU, you will be controlling your germ through 7 different modes and even a single-player option. The standout difference is that instead of being able to roam freely to attack other germs, you have to attach yourself to a peg and swing yourself to get around the board. While at times, I felt like I was not in complete control of my character, you slowly give in to that aspect that it is part of the chaotic nature of the gameplay. However, I never felt that I was losing battles because of this, but I did feel that I could have done better if I felt more in control at times. Despite that, this did not hinder my experience while playing the game. 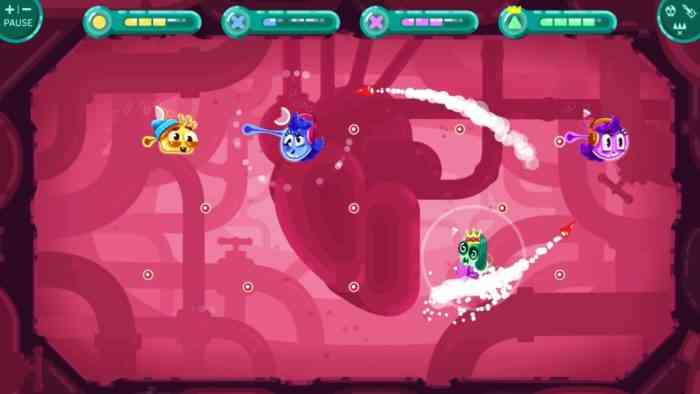 Gerrrms starts players off with a quick tutorial which is very much appreciated as the game has some unique items, modes and as mentioned, the ability to get around the screen via peg instead of free-range. The single-player mode, “Mission Mode”, is a great place to start. As you play through the various goals, players will unlock different abilities, modes and characters.  I found single-player mode a lot of fun since the goals were all different, for example: “Win without losing any health”, “Dash into your goal”, etc. The single player mode does extend the playability of this game; however, the main focus is really on the multiplayer action. Speaking of the multiplayer mode, let’s get into that.  There are two options: tournament or custom. If you choose tournament mode, six random modes will be chosen, and the winner is determined by who has the most points at the end. The drawback is that you cannot select the modes to be featured in a tournament. While custom mode allows you to pick your mode and it is a best out of three chosen winners.

Bugbomb Games really impressed me with the variety of modes that are available – there are the usual suspects such as “Capture the Flag” and “Deathmatch”. But there are some unique and fun modes such as “Antibody” where you need to avoid attacks for as long as possible. Or “Bomb” which is similar to “hot potato” where you pass a bomb around among players and the person with it when the timer goes off, loses.

Visually, this game is bright, colorful, and cartoonish. Character design stands out here as Bugbomb Games really took the time to create a wide range of individual “gerrrms” to play as, but I think a missed opportunity would be to have each one have a different ability or something unique about them other than their appearance. The items and arenas themselves are just as unique and colourful as the characters, which allows for some variety when playing the different modes, especially when they are the focus of this games experience. Overall, the sound design fits with the lighthearted tone, while the music compliments the game so that you can focus on the task at hand.

Overall, this is not a game where you will be spending a lot of time with. Complete rounds take about 10-15 minutes and are high-paced chaotic action. This is the type of experience you bust out with some friends or play by yourself when you want something quick and simple. As the rounds are short and sweet, this leads to it being both addictive and refreshing. That said, it lacks depth and the overall experience is shallow. Despite the lack of replayability, Gerrrms is a good-looking, and fun experience. Don’t let the germs keep you away!

Vampire: The Masquerade – Bloodhunt is Coming to Early Access in September