Fury Unleashed is really just a simple game with simple controls, but it is unexpectedly hard. In fact, it’s very hard. But that doesn’t take away from the entertaining aspect of it, nor does it make you rage quit and never play it again. They’ve got the formula right for the level of fun and intensity, and there’s also something charming about how they created a modern game true to its classic roguelite genre. Even though the difficulty level is quite high, and the game is short and sweet, there could be lots of memories made for the next generation that they may look fondly back onto this experience.

The story is more unique than what you would first imagine. Sure, you’re Fury, the main character of an action shooter comic book game. You are well-equipped with weapons and have no problem random enemies that want to kill you. You run around trying to find the next chapter of the comic book while collecting ink orbs that your enemies drop that could be exchanged for new powers and items. But for what purpose? We slowly get our answer while selecting and entering which comic panel to jump into, which acts as our game’s map. As we move forward in this 2D world, we catch glimpses of our identity, our creator, and sometimes we’ll even stumble upon panels that have unfinished sketches of characters. Later on, you’ll realize that this story isn’t really about Fury, it’s about how he helps his creator get out of his creative rut.

Truth be told, the story itself wasn’t too appealing for me as I’d much rather be shooting things all day. Having that said, I believe the gameplay was a lot more interesting than the plot, and this style of game was the reason why I would pick up Fury Unleashed in the first place. Not saying that the plot was pointless – it was refreshing and new and provides a background story in a very meta way, but I stayed for the action. Combos are an important part of the game, and the game’s smooth graphics made it easy to enjoy. The initial loading screen didn’t take long, nor was there any noticeable wait time when traversing between comic panels. This means if you die, it’s unlikely due to lag and honestly more because you made a bad move.

Hard is the New Normal

There are two levels of difficulty when you first begin – Easy and Hard. What happened to normal? Well, Hard is the new Normal, and Easy doesn’t make it that much easier, either. Regardless of what you choose, you will inevitably die. Sorry. Fortunately, after our protagonist meets their untimely death, you do get to allot skill points earned from the game and upgrade them with a fairly decent skill tree. So even though you may cry after dying for the tenth time in Chapter 1, Fury will only get stronger and more resilient, which brings hope that the next run will only be better.

Speaking of, no two runs are identical and that’s what makes the game shine in its replayability factor. Of course, the reason you would replay this game often is not only because it’s entertaining, but because it is actually difficult. Although the controls for the game are incredibly fluid and your fingers naturally go where it needs to go, you can’t control your enemies. Due to the randomness, you could be faced with one enemy in one panel and then five in the next…Or you could stumble upon a treasure chest, be given a short quest, or have the opportunity to trade orbs for power-ups. Anything can happen, it just depends on what you make of it. 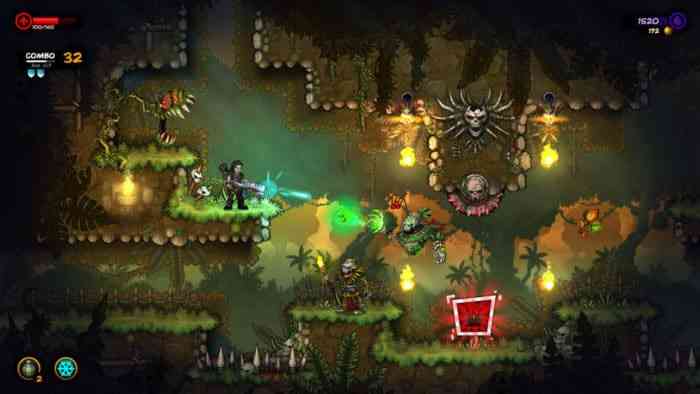 Despite all this talk about unavoidable death, even those who aren’t familiar with this genre of game can easily pick it up and whiz through one chapter (after several upgrades, of course). It is still difficult for a beginner, but nothing in Fury Unleashed is impossible, it just takes time. In fact, there’s an option for local co-op where you can have someone help you on your journey. It’s fun and really brings back some childhood memories, except only this game is more challenging and the other person on my couch doesn’t play video games. Oh well.

All in all, Fury Unleashed provided me with several entertaining afternoons and also brought me back to the past. It’s very fun, hard to play well, and the randomness of the levels was a treat for those looking for a challenge. Even though the game was short and felt a tad repetitive due to going through the same chapter after endless deaths, it doesn’t chastise you for failure and helps you along the way to become better than your previous run. Yes, it can be frustrating, but it’s an enjoyable frustration – I recommend the challenge.