Flipping Death Review – The Most Fun You’ll Have Being Dead

Developed by Zoinks, Flipping Death is a delightful and aesthetically pleasing platformer that combines an eye-catching art style with a kooky narrative and simple puzzle solving mechanics. Players take control of Penny, a horror movie and pop culture obsessed girl who was recently fired from her job at a funeral home for being a little too enthusiastic about selling their product. On her way home with boyfriend Elliot, they cross through a foggy cemetery where Penny spots a mausoleum. Unable to resist, Penny breaks in and tragically plummets to her death. Appearing in the afterlife, Death assumes Penny is the temp he ordered so he can take a vacation and leaves her in charge of the dead while he heads off to the moon.

If this plotline already has you intrigued I guarantee the rest of the game will be right up your alley. The art style is a mix of Tim Burton meets Dr. Seuss and the flatworld nature really pops as you explore Penny’s hometown. The game is – at its heart –  a platformer in which Penny will encounter restless spirits who need help moving on. This can be solving their murder or simply fulfilling a final request, but of course, to help them you’ll need to manipulate the world of the living. Gathering ghosts will give Penny the energy she needs to possess the living and its in this that the entire world will flip over as you take over the hapless mortals’ body and use them to solve puzzles. 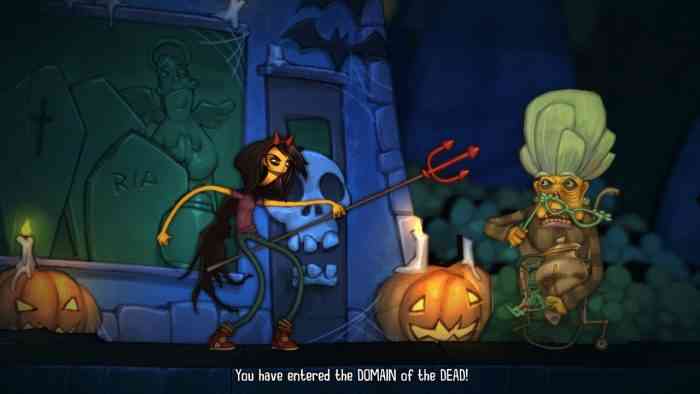 Each character you can possess has their own personality and abilities, with Pokeman being a particular favorite of mine: he is a dastardly villain who loves to poke things. Not only are the puzzles often inventive, but as you unlock each side quest the menu offers amusing hints on how to complete them. It isn’t enough to completely give it away, but it’s actually a useful hint which is more than can be said for many games. The characters and loading screen narrator are greatly entertaining, and to skip the narrator simply because the stage is ready would be a big mistake. This game exudes charm and even at a slightly slower pace I never felt like it dragged or that I was lost on what to do.

Mechanically the game is fairly basic with simple platforming to navigate the town. Penny can throw Death’s scythe and teleport to it for some creative climbing and dodging, but beyond that there is little for her to do as the majority of what happens will take place in the land of the living. Once a character has been possessed you don’t need to expend Ghosts to possess them again, and they become a quick travel point to make navigating a little easier. There were a few times Penny didn’t want to teleport unless she was facing the scythe which felt clunky, but otherwise the game controlled smoothly.

The art style in Flipping Death is simply wonderful to behold. The elongated and obtusely shaped objects and people are memorable and fun with entertaining flappy heads and the flatworld style presentation that makes the game seem as if its made of cardboard. It’s whimsical and entertaining just to see what you can do to make people interact with one another and it’s quite easy to get distracted from the main quest to goof around with the wacky and weird inhabitants. I beat the game after investing a healthy 8-10 hours into it and it really is the perfect length to wrap up the story. I wish there had been just a little more for me to keep playing, but as an experience, this is the perfect length for a game of this kind. At no point did it feel like it stagnated and everything you do has meaning to further the narrative. I hope Zoinks sees the gem they have here and continues this into a series as this particular combination of art style, gameplay mechanics, and narrative make for a heartfelt and endearing experience. 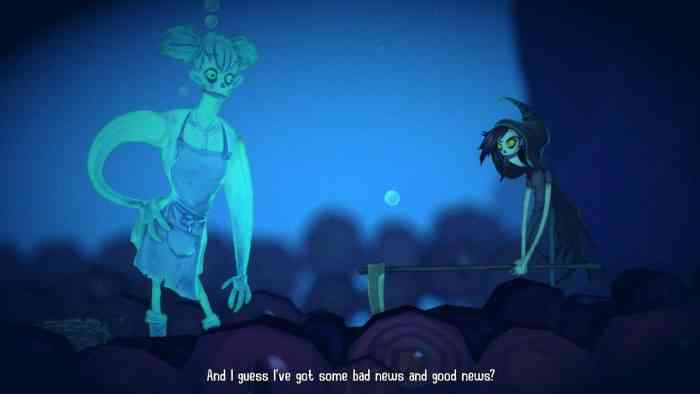 Flipping Death is a humor-laden puzzle platformer full of heart that I couldn’t stop playing. With an inspired and eye-catching art style, great dialogue, simple controls, and a wild and fun narrative, the only downside to the game is its minor teleportation problems that are easily worked around. Characters abilities are fun to utilize and each person in town is their own special brand of adorably weird that makes you care just a little more about them. It has a comfortable runtime and the game leaves me with a lasting impression of an all around great experience. 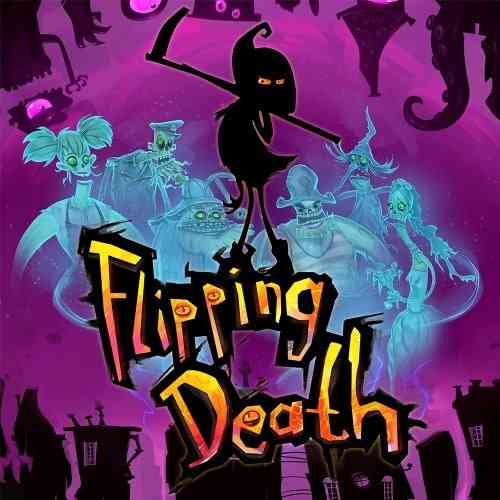