It may not look it but Figment is really a game about depression. The bright colours, cheerful music, and over-the-top voice acting is just a smokescreen for what’s really happening beneath the surface, or in this case, inside the human mind. It’s the game’s way of making me understand, even a tiny bit, about the difficulties the disease can bring about on people. Figment is also smart in how it chooses to handle the subject matter. I never felt bombarded by its attempts to remind me of its premise but actually intrigued and excited to see how aspects of mental health were being depicted in its storybook art style. From its surprisingly dire opening cutscene to its charming musical villains, Figment is an intelligent, quirky, and mature action-adventure game that everyone — regardless of your history with video games — should play.

The twist that Figment takes place inside of someone’s human mind isn’t kept a secret for long. In the opening cutscene, it’s revealed that a father is speaking to his child while driving until suddenly the sounds of a car crash rip through your eardrums. Immediately after, you’re transported into the zany world of Figment and left to wonder if the father and child are okay. It isn’t long until you realize you’re now inside the father’s head, playing as a physical manifestation of his courage. If it all sounds a little like Disney and Pixar’s “Inside Out,” that’s because it basically is, only magnified to a more edgier degree.

You’ll explore the nooks and crannies of the mind through Dusty, a mild-mannered hero that looks a bit like the long-lost brother of the Teletubbies. Tagging along for the journey is his trusty and overly optimistic bird sidekick, Piper, who compliments Dusty’s dry and exhausted demeanour. You’ll scour the brain’s various areas (with clever names like Cerebrum City) solving puzzles and ridding the mind of a creature infestation. While it’s very much a straightforward and linear path to these areas, I still enjoyed taking in the sights and sounds of each new level, as they all made excellent use of different colour palettes and musical themes. 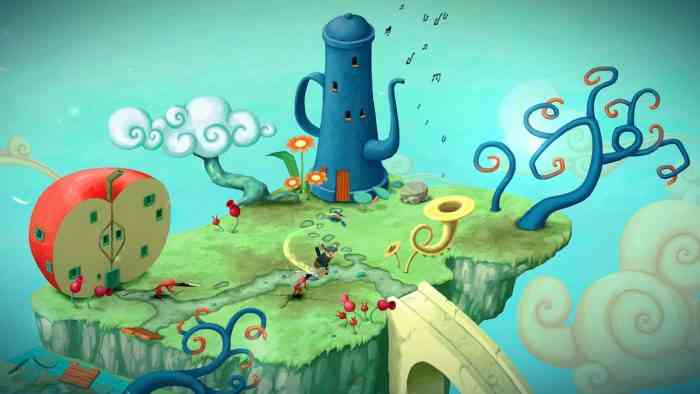 The themed-worlds in Figment are, simply put, wonderful. Worlds are cleverly detailed and thought out. I loved venturing into the creative side of the brain and seeing all sorts of fun and crazy architecture, then moving to the logical side of the brain which is filled with clocks and various moving parts. Passing each area typically involves solving a handful of environmental puzzles which range from very simple to very complicated. Possibly my favourite puzzle involves literally moving a train of thought throughout the clockwork environment, crashing through cobwebs in the mind and guiding it to its destination.

Puzzles, for the most part, involve finding spare batteries and valve handles to activate and manipulate certain objects. For example, a green battery can power a windmill device that can blow away a poisonous gas. The handle can turn the windmill in place so it’s aimed at the correct spot. This may not sound like a whole ton of fun on paper, but Figment has such great pacing throughout that most of them tend to not overstay their welcome. In certain cases, locating these specific items are sometimes more entertaining than the actual puzzles themselves. 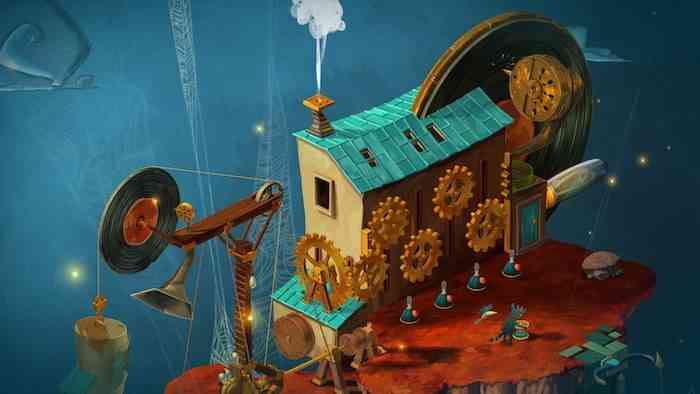 When I wasn’t carrying around orb-like batteries and twisting handles, I was bobbing to the infectious soundtrack and fending off the nasty creatures scattered around the mind palace. Figment’s combat system is as simple as they come, mainly consisting of quick sword slashes and a quick dodge button. Hammering on the ‘Y’ button will make quick work of the Nightmare foes, whom can often surround you if you aren’t mobile enough. Some of them can dole out some hefty damage too, like the Rat-like creatures that will vomit on you if you don’t stay out their way.

While combat can occasionally feel like a means to break up the game’s constant puzzling, it’s the boss battles that really steal the show. Here is when puzzles and combat combine to make some of Figment’s most memorable moments. Dusty’s wooden sword is practically useless in these encounters, so you’ll need to use your noggin to get the upper hand, all while enjoying a musical number sung none other than the boss themselves. It sounds weird, but I for one won’t be forgetting them any time soon.

It’d be a big mistake not to mention just how much of a visual treat Figment really is. The artistic direction is nothing short of amazing. It’s incredibly inviting and is also one aspect of the game that gets continually better as you progress. The range of colours is constantly surprising, and it looks remarkable on the big screen and on the Switch’s 720p display. The same can be said for its audio presentation, with its beautiful and somewhat melancholic soundtrack being the definite highlight. The aforementioned boss musical numbers help keep things a bit more upbeat, which is a nice change of pace considering the sombre tones of the subject matter. 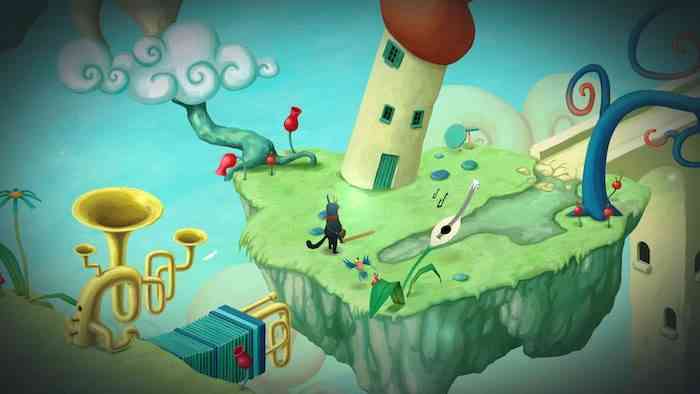 Figment also has some very hilarious but also cringy voice acting. The banter between Dusty and Piper is pretty great, but the NPC voices can be hit and miss. Some are downright hilarious while others are just silly and over-the-top. It’s safe to say that your mileage will vary in this department, but they at least ensure the world of Figment is never boring.

Figment is a beautifully made puzzle-adventure action game that sits among the finest indie games on Switch. The gorgeous storybook art style, sweeping soundtrack, enjoyable puzzles, and the thought-provoking storyline is what makes Figment a must-play experience. The pacing, humour, and creativity are all top notch, and it sets everything up for a hard-hitting and memorable finale. It tackles depression in a mature way without feeling forced and manages to tell an engaging story to boot. Don’t spend too much time thinking about it, just buy Figment. You won’t be disappointed.