Listen to the Sermon That Is Far Cry 5

So I’m screaming down the highway in a purple Semi with Heart’s Barracuda blasting over the radio. Gorgeous Montana scenery is whipping past, and there’s a massive machine gun strapped to the truck. Roadblocks, enemies, none of them stand a chance against me: a rookie deputy in the Hope County Sheriff’s Office. Absurd? Assuredly. Typical? Hell yeah, brother. This is Far Cry 5.

No longer content to simply throw a giant map saturated with icons at you, Ubisoft has been hotter than a 2 dollar pistol lately. Assassin’s Creed made a triumphant return, and they’ve refused to give up on big names like Rainbow Six: Siege and Ghost Recon Wildlands even when the initial response has been meh.

Far Cry has more of a groove than those other franchises, thanks to the phenomenal Far Cry 3 and bigger is better Far Cry 4. Still, there’s a definite risk of running out of ideas or burning customer faith going back to the well a third time. Let me say this: they went back to the well, and I drank straight from the pump handle with a huge grin plastered all over my mug. Almost everything works like a dream, and the things that don’t are generally acknowledged with a wink and a nod by the game. The developers know exactly where people are going to think “this again?”, and that’s exactly when you get a GOD DAMN GRIZZLY BEAR. 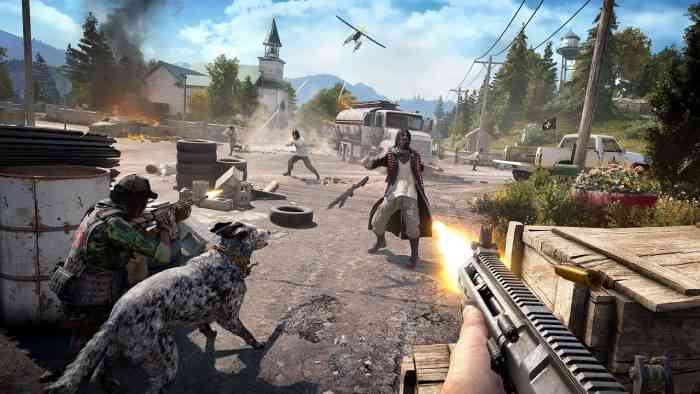 If you’ve played either of the past 2 installments in the series, you’re already familiar with the bones of Far Cry 5. A huge, beautiful, and phenomenally well designed open world, a charismatic and creepy bad guy, and a license to go hog wild with it.

Hope County is indeed a fantastic open world. The rocky mountain climate is one that has yet to be explored in almost any game like this, and it lends itself really well. I appreciate the balance and restraint that went into the structure. There are no forced icy regions or random volcanoes, and yet the whole thing feels unique and diverse. There’s no shortage of things to do either, and wandering around the wilderness almost always shows off some weird interaction of systems.

I would’ve been hooked on the gameplay by itself, but the characters and story really make Far Cry 5 a brave product. For one, the head wacko is a white, former Christian American, the inspiration for whom seems to stem from the more evangelical churches of the American south. To my knowledge, something like this has never been tackled in a game – at least not one this high profile.

The lunatic Eden’s Gate cult is led by Joseph Seed, and he’s aided by his 3 siblings: Faith, Jacob, and John. Each one controls a section of the map, which you predictably need to liberate in order to gain access to the final confrontation. It sounds rote, but each region has a boatload of interesting folks to deal with. From the Whitetail Militia in the north to Adelaide Drubman in the east, it’s safe to say you’ll be highly entertained by the cast. 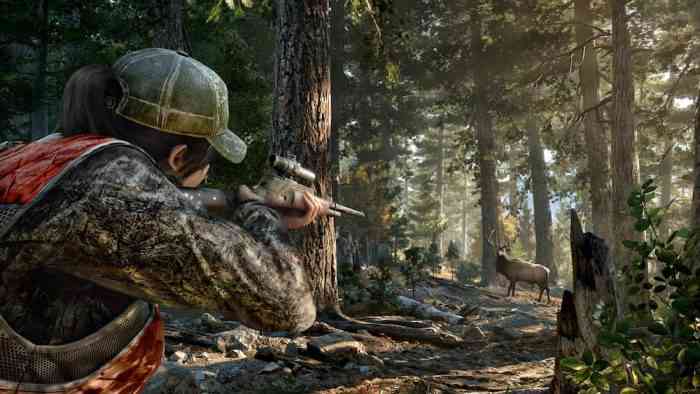 Joseph Seed is going to be extremely divisive. Personally, I applaud Ubisoft for greenlighting what could (and will) be looked at as condemnation of the American way. There’s enough wacky supernatural business to abstract it slightly, but there’s enough real talk that I thought to myself I wouldn’t be surprised to hear this on the news. The writing is excellent, walking the line like a hillbilly after a 6 pack. It stays on the fence, playing it straight, only to suddenly veer into insane territory. This makes the journey both exciting and unpredictable even when the minute to minute happenings have been done before. Adelaide’s descriptions of her, ahem, amorous exploits would make Hugh Hefner blush, but they tell us so much about who she is. This is the most connected I’ve felt to mission giving characters since The Witcher 3.

A lot of that is because the voice acting does a great job bringing the characters to life. Greg Bryk’s Joseph is outstanding. There’s a purposeful calm to his delivery that had me dying to see what would happen next. He’s played up as a sympathetic character who truly believes he’s acting in the best interest of his followers, and there were certainly moments where his inner nature shone through the psychosis. 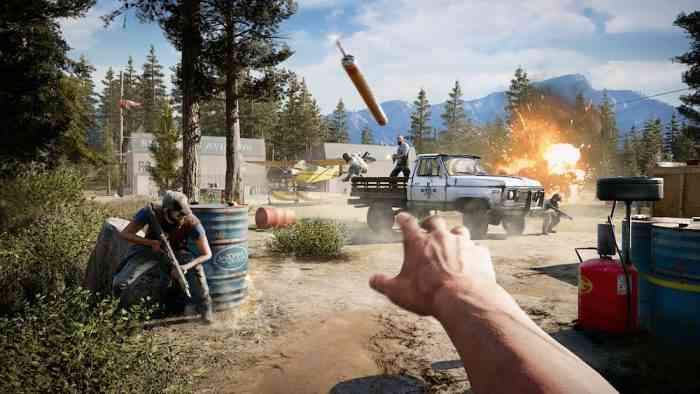 Speaking of shining, Far Cry 5 is mighty pretty to look at. On PS4 Pro you’ll get 4K (upscaled) output at 30fps, but the HDR implementation is striking. Flying a chopper through a river valley towards the sunrise in the middle of a warzone never looked so peaceful and inviting. The music really suits the setting too. The licensed soundtrack kicks in at the right times when you really need to whoop ass, and Dan Romer’s original score is an absolute treat. There’s a huge range of themes, though my favorites are the haunting hymns of Eden’s Gate and Clutch Nixon’s wailing guitar solos.

I could gush about that for a few more paragraphs (because it’s awesome), but instead I’ll move on to your cuddly and lovable sidekick, Cheeseburger. Cheeseburger is a diabetic Grizzly Bear who wrecks fools left and right and is undoubtedly the greatest sidekick in the … oh gosh dang it I’m gushing again.

The rest of the sidekicks and more prominent people have great stories to tell too, of course, like sniper Grace Armstrong or bow huntress Jess Black, but I’m not going to spoil those things for you.

What I will spoil is some mechanical hooey. Driving land vehicles is competent, while the set up in the air makes you feel like a top gun. Movement is precise enough for my tastes, and the shooting itself has a good deal of weight to it. I definitely wished for a wider array of weapons to pick from but settled on a combination of Magnum, Bow, Rocket Launcher for maximum situational diversity. Some baddies are completely oblivious and easy to sneak up on, while others will spot you quickly unless you’re clever. When stealth is a big part of capturing outposts and so on, and it was nice to see some variety there. 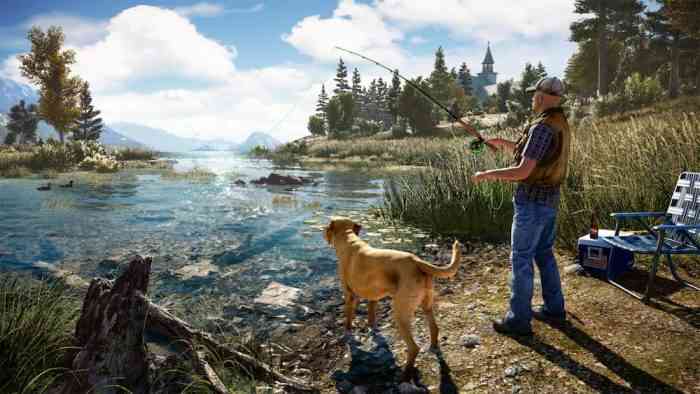 All that variety means there’s a lot of content in Far Cry 5. A meandering playthrough of the main story can easily take 25 or 30 hours, and you’d likely miss a bunch of the cool stuff along the way. Even then, you’d still have the new Far Cry Arcade mode, which lets you build your own levels and upload them for your buddies. There’s not much to play right now, but it could be a source of some really weird and excellent stuff once the creator community gets rolling.

If you’re itching for a hootin’ and hollerin’ good time with the good ol’ boys and gals of ‘Murica, look no farther than Far Cry 5. The solid core of the game provides a perfect vehicle for a nuanced and thought-provoking story in an underused setting. Some of the content might make folks uncomfortable, but if you hang on tight like Clutch Nixon would, there’s a very worthwhile adventure to be had in Hope County.

**A PS4 copy was provided by the publisher** 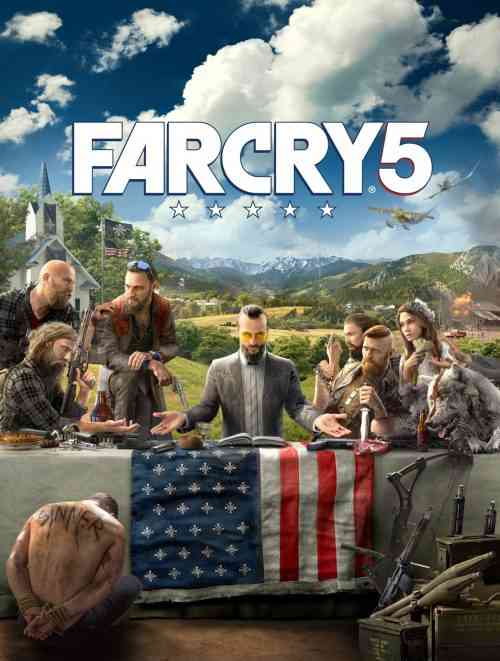