Everybody’s Golf aka HotShots Golf has been around on PlayStation consoles for 20 years. To attain such longevity Clap-Hanz has reinvented the franchise every few releases. Hence the rebranding to Everybody’s Golf and it’s VR counterpart. Stylistically, this version is less cartoony, at least as far as the caddies and hostess goes. You never get to see yourself in the game in the VR version.

Everybody’s Golf has the franchise balance of arcade and real physics in its gameplay. This VR version leans even more into the physics side of things as the flight of the ball is totally dependent on your grip and swing. The game supports both the DS4 and the Move controller but it’s no contest as to which controller to use. The use of a single Move controller really gets one immersed into the swing of the game.

Eye of the Tiger

Game calibration is vital here and this is nicely emulated by allowing you to make adjustments by waggling your controller around just like one would with a club in real life. Once you set yourself up for a shot, your controller will vibrate to let you know it is sitting flat on the ground. It’s these little touches that really make the game immersive.  Your game actually takes place perpendicular to the camera, with the ball driven to the left or right depending on which hand you play with. So you face the camera to drive the ball. Even though should feel transparent to you because of the VR visor, it took me a while to get used to initially setting up the game to play this way. Weird.

The major mindset change playing Everybody’s Golf is that control and finesse are far more important than the power of your swing. Any wrist turning in your swing will send the ball curving away with a hook or a slice. The game computes the power of swing through a smaller arc than a normal swing so you have to learn to slow down and focus on your grip. Fortunately, the game is equipped with a driving range where you can practice a variety of shots be they off the tee, from the ground, or even putting. 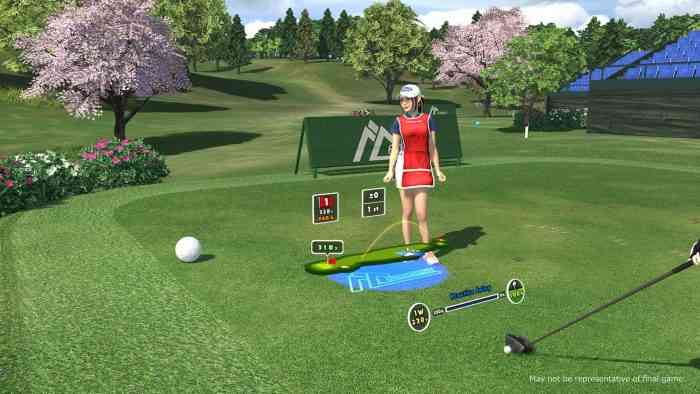 You access the driving range, courses, and other menu option items from the reception area of the game’s golf club. Here the club hostess will direct you on how to access the menu amongst other things. It is also here where you begin to realize the game’s shortcomings. The main area of the golf club is eerily empty except for the hostess. There is no else about and this includes the driving range and on the courses too. This isolation deepens because the game is single player only with no form of multi-player offered.

For those that need a competitive element to their golf game, daily and overall leaderboards do exist. As well, the game keeps track of your best scores too. The game is not easy. Getting par is hard which is just as it should be like in real life. However, there is no campaign.

You start with only one course unlocked and can only play three holes. As you progress through the game, new clubs and balls are unlocked. Then you can play nine-hole challenges after which the remaining two courses unlocked. The first course is standard fare one would find in their immediate area with tees set in forest areas and easy to read greens. The graphics of the subsequent courses get more expansive as next is an ocean side course and the third is based on a Jurassic Park theme where you tee off mountaintops or next to dinosaurs.

While in course play, you are paired with a caddy which has good and bad points. Graphically the character models for these are excellent. You will unlock other caddies and their respective accessories as you progress through the game. On the bad side, they have horrible voice acting and can be annoying as they talk while you are trying to shoot. There is no option to silence them, which is sorely missed. As a welcome distraction from straight up course play, the caddies will offer you mini-game events to try. 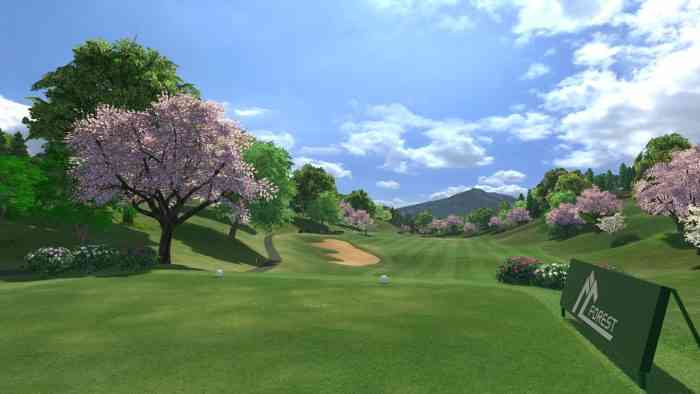 On the technical side, the game looks great. The courses are detailed, brightly coloured and the image is sharp. Even tracking the ball in the distance is not that hard. Accompanying the visuals are excellent audio cues. They come from all directions so the wind blowing, insects buzzing by, and airplanes flying overhead all add to the game ambiance. To top it all off, the whack of the clubs sound great.

There are several aids available to the player to make the game more accessible. You can call up a virtual tablet to check your stats and course information from which you can view the holes from every angle. Option to make game easier to play – tornado mode – increases cup size and creates a mini-wind storm to draw your ball into the hole. You can even throw grass in the air to see which way the wind is blowing!

Because of the lightness in content, Everybody’s Golf feels like an early access version of the game. At least the game is priced accordingly. Fortunately, the paucity of content is offset by the strong technical and gameplay aspects of the VR presentation. Further, the VR mode really captures the finesse of setting up a shot. You can take practice swings which will project how the ball will fly before you switch to address mode and ‘really’ hit the ball. Everybody’s Golf VR is another shining example of a VR implementation of a game that has to be experienced to feel how immersive it is. 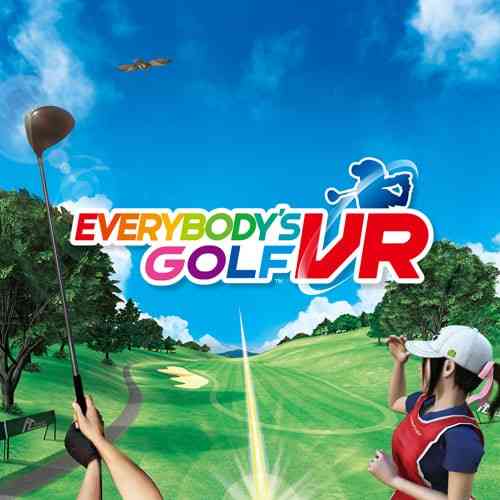