The government is lying to you and so is the media, therefore, so am I. The prism of the media lens is meticulously shattered in the dystopian choose-your-own-adventure story game, Alt-Frequencies by developer Accidental Queens. In this lightweight game, available for PC and on Mobile devices, the choices you make in distributing information between pirated radio frequencies and mainstream media directly affect the entire course of voting and rebelling society. As the player, there is a constant sense of urgency and fear brought up by haunting radio buzzing that taps right into our Silent Hill series PTSD.

Alt-Frequencies is a quick, single-player only jaunt the first time around. Once you get the hang of recording and distributing media, it’s easy to figure out which bits of information are relevant and need to be provided to which stations. You feel a sense of accomplishment when your item is featured live and the subsequent stations all have reactionary measures in place. Everything plays smoothly, controls are easy. There are no graphics or anything to contend with, just a radio, a record button, and the occasional white screen of the time loop activating and your day starting over.

The characters in Alt-Frequencies are rounded and interesting, even the most shallow morning zoo DJs have rich information that compels you to tune in. The voice acting is really solid and believable. The story unfolds and you begin to meet characters like Prime Minister Amal McMillan and Detective Turay, two figures directly involved in the government conspiracy you are involved in, and you find yourself immersed in what they have to say. You want them to answer for their behaviors, legitimately. 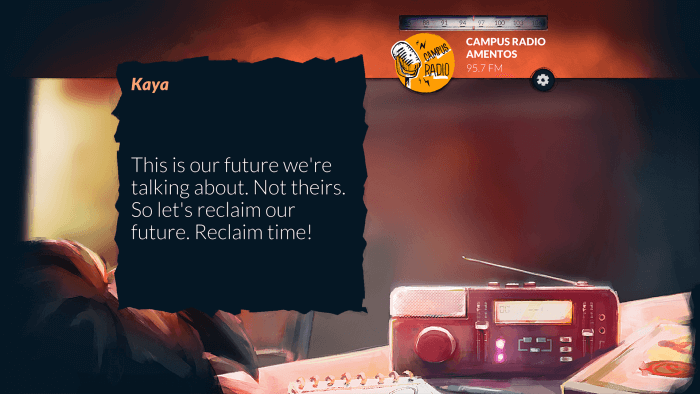 The real genius of this game falls in the sound editing. Moving from station to station reminded me of dialing an old needle radio during commercials to find something worth listening to. The sound effects channel, the station that reported train departures, and even the hacking of stations to descramble them, all were immersive experiences solely based in sound. I played this game in surround using my high-end gaming headset and it was transformative and compelling.

Overall, I found Alt-Frequencies provided some great commentary on how the media decodes the underlying truth and spoon feeds it to the public and how governments can step in to attempt to control the narrative. It was interesting seeing the introduction of rogue elements to the story and how those played out. This experience has a lot to say about a lot of things, which is really my criticism. I wanted so much more. This story is so quick to get through the first run, and while I look forward to exploring some more paths, a quick look at the achievements I have yet to unlock shows me that there likely isn’t much more play time to be added. I hope I’m wrong, but I also hope that this game continues to update, or perhaps provides some sequel content. In all honesty, I think the price is a bit high for the amount of content provided.