Many games follow tried and tested methods that echo titles which have inspired them, however some games take inspiration from opposite ends of the spectrum in order to create a unique and innovative experience. Everhood’s influences are clear: a portion of Undertale, a dash of Guitar Hero, topped with a sprinkle of Ikaruga, but will this experimental recipe prove to be a mouth-watering combination?

You play as Red, a wooden boy who wakes to discover that his arm has disappeared. Stolen by one of the many strange characters that roam the peculiar world, your task is to track down the thief to reclaim what is rightfully yours.

As you embark on your whimsical journey, you will encounter many characters who have their own narrative. These short and often nonsensical conversations give you a snippet of the mysteries that lay within the realm and adds charm to the absurdities you will stumble upon. Each character is full of personality which links to their distinct design. Even with the odd grammatical error, the self-aware humor provides for some hilarious moments and is integrated effectively throughout the world. 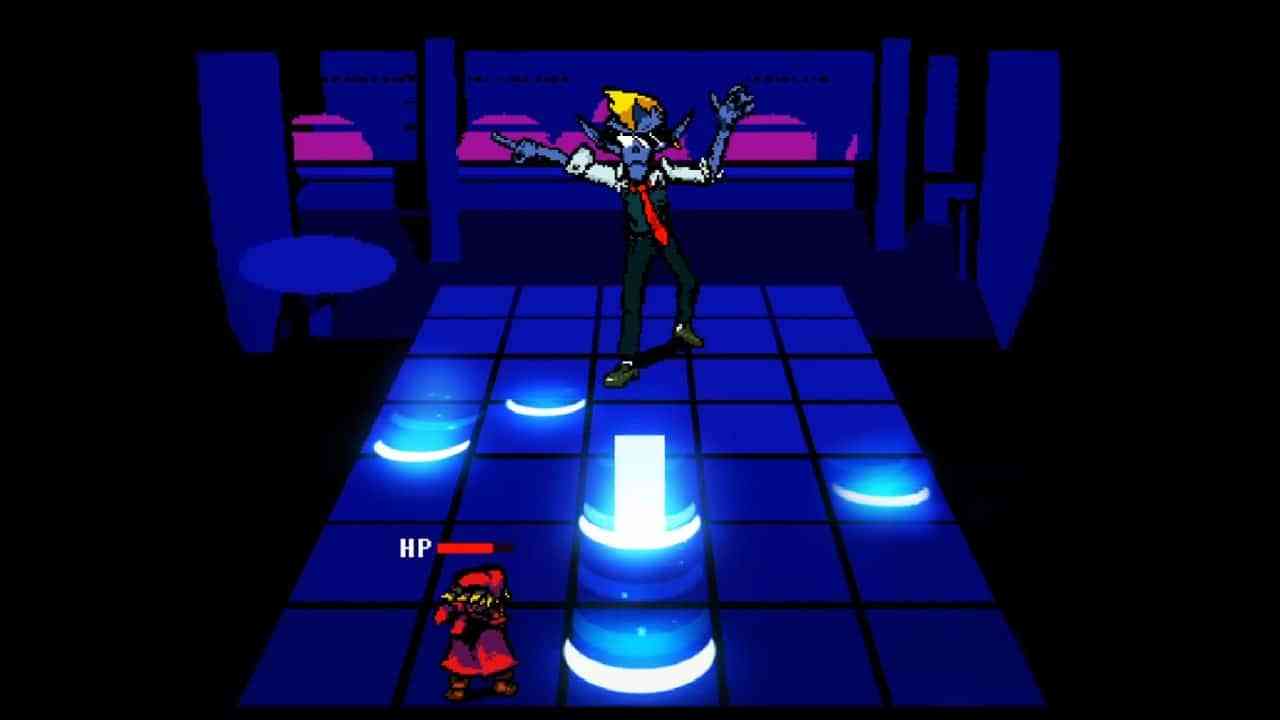 Fans of the incredible Undertale will feel right at home with Everhood. You are required to explore the bizarre world and communicate with its inhabitants in order to complete quests. Although this sounds pretty conventional, the battle system is anything but. Fights are similar to Guitar Hero and other rhythm games but rather than hitting the note, you are required to dodge it. This musically driven mechanic progresses throughout the game, making each confrontation feel varied. Fights in the latter half of the game will require you to absorb notes as well as jump and evade objects whilst attempting to fire shots at your foe. From kart racing to tennis, the developers, Chris Nordgren and Jordi Roca, have done an excellent job at keeping the gameplay fresh and full of surprises throughout its 6 to 8-hour campaign.

Each boss has its own unique theme accompanied by incredible and often hilarious animations. Whether you are fighting the tap-dancing demon or guitar picking toad, the songs that partner these battles are perfectly aligned which results in some brilliant moments. Songs crescendo purposefully culminating with hectic reflex-based segments that will keep you gripped throughout confrontations.

This is not a game for the faint of heart. Although you are eased in with relatively simple encounters the difficulty does ramp up, especially in the final third. Musical notes and vertical arrows appear at blistering speed meaning that you will most likely fail your first attempt at later segments. Learning the sequence and replaying becomes hypnotic, and it’s at these moments where Everhood shines. Fear not; if the difficulty is too high there is a breadth of options available at any time during your playthrough. The sheer amount of notes you have to avoid is not the only reason you may fail a battle, another reason is the environment. As fights progress, the surroundings may alter making sequences tougher. Notes may appear later, the screen may even spin and create psychedelic, kaleidoscopic sequences that will leave you mesmerized. While I particularly enjoyed these segments, they were extremely flash intensive and could cause significant issues to those who suffer from epilepsy.

Everhood’s esoteric world will see you traipse through forests, nightclubs, and even a Dungeon and Dragons session. Each section has been beautifully designed in a faux 8-bit style that harkens back to classics from that era. The minimalist approach adds atmosphere to areas and creates an enigma about what may lay in the shadows. Unfortunately, nothing really comes of this and the darkness is just a gulf of emptiness. 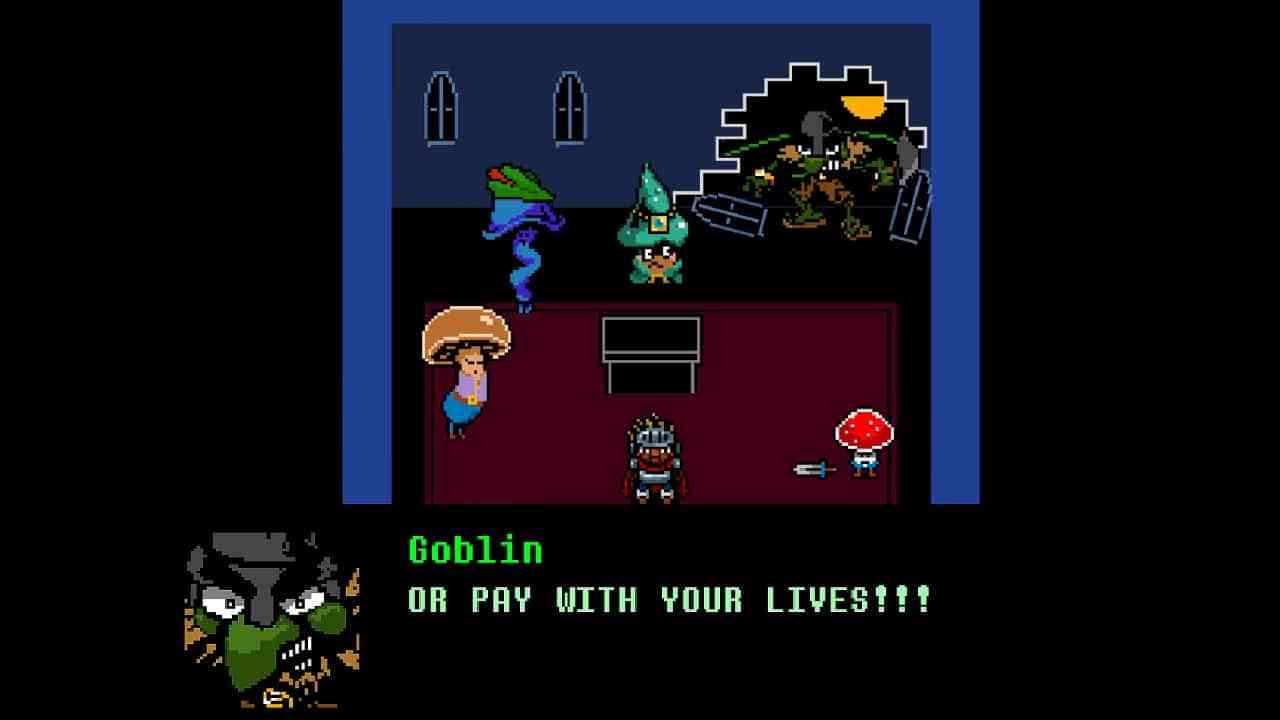 The final third of the game falls flat. Each aspect of the mainline quest is fascinating but the final quest is a bit lackluster due to it being entirely focused on backtracking. This soured my experience with the game as it felt unnecessary and added nothing new to the adventure.

Unfortunately, Everhood is marred with excruciating load times. Although transitions within one area were seamless, when going to a new environment or restarting bosses, you are greeted with a black loading screen for up to 30 seconds. This became extremely frustrating towards the end of the game when bosses were harder and dying became more frequent. Rather than being able to jump straight back in, you have to sit and seethe. Also, especially during busy boss battles, the frame rate dropped making it harder to time counters and dodge adding further irritation in the final third.

Everhood is an enchanting rhythm-based adventure that falls short of greatness due to a few technical issues. Its combat system is an absolute joy and the music is brilliant, however, frame-rate drops and lengthy load times hinder what could have been a great experience. 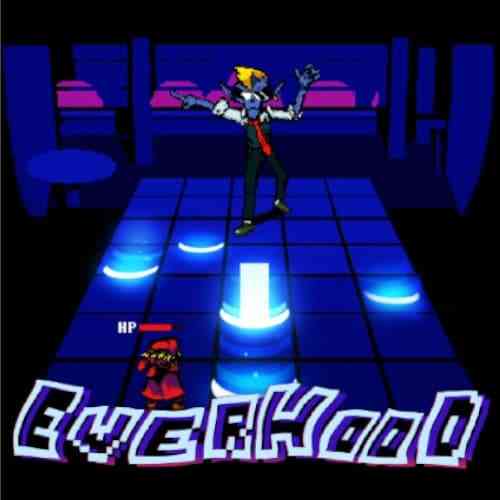 Bandai Namco Officially Unveils One Piece Odyssey’s Release Date
Next Maquette Review – Puzzles All The Way Down
Previous The Battle of Polytopia Review – Easy to Pick Up, Hard to Master