Maquette Review – Puzzles All The Way Down

Breakups are the absolute worst. They leave a crater in your life that stretches for miles in every direction. The event itself burns like mercury stew, so why not wrap it in a protective layer of puzzle game? Maquette explores the existential horror that is heartbreak with a complex set of recursive puzzles, plunging you into a beautiful prison which somehow contains itself forever in every direction. While the game’s emotional tone comes in fits and starts, the puzzle world itself is almost indescribably beautiful. Seriously, if what I say next fails to make sense, there’s a handy gameplay trailer embedded just below.

The world of Maquette is both tiny and enormous. While an adorable diorama shows the complete stage before you, you’re also inside a larger version. Meanwhile, an even bigger version encompasses that one, and so on. The scales in this game get downright intimidating, to be honest. More curious still, objects moved from one version of the world to another change their relative size to suit their new environment. You can actually see a huge version of the object you’re moving if you’ve got the camera positioned in the right way. All of this acts as a tactile, ever-shifting portrait of your relationship in its various stages.

You experience this love story through the eyes of Michael. As you progress through your memories, the world around you also changes. Things get brighter or more dreary, depending on the dominant emotion in play. The shifts in your world feel potent, immediate, and significant. As someone who’s experienced a similar version of this suffering, I was utterly bowled over by Maquette’s opening notes. The first couple of scenes are perfect homages to love’s lost light. The game can’t quite maintain this potency level, however. 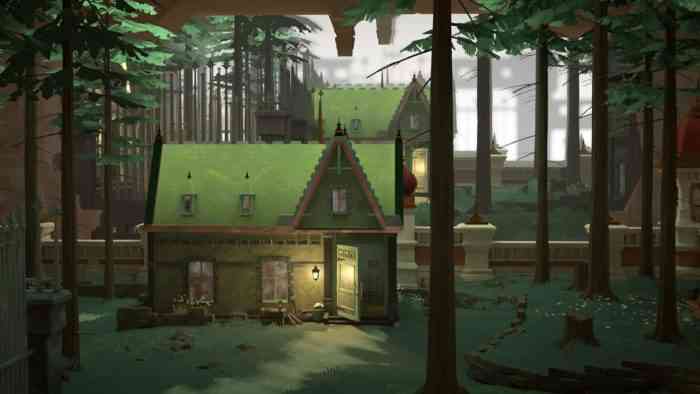 This is a two-fold problem. The first issue is the gameplay. The puzzles are incredible! They’re also a tiny bit time consuming. Some mistakes can have you walking a long way to a more relevant part of the map. Eventually, the game saw fit to mention and/or activate a ‘return to the dome’ function, but this was with 90% of the story in my rearview mirror. Keep in mind, this is an issue on a relative scale. The game’s runtime is pretty breezy, so it’s not like you’re losing hours to this issue. But still, crossing that colossal gap between sections got rather old by the third lap.

Of course, you can always just re-load your last autosave! It’s both faster than walking, and essential for overcoming some of the puzzles. But between the save-scumming and long walks, some measure of the emotional impact is lessened. It’s hard to hold onto that coal-fired nugget of ephemeral sorrow when you’re cursing out the most recent head-scratcher of a puzzle. The other impediment to Maquette’s emotional impact is kind of the story? Hear me out, here.

The Devil In The Details

To be clear: every time the game leans on concrete narrative details, I found myself analyzing and predicting the path of the relationship rather than like, feeling things. A part of this is just how well-versed I am in love stories. We all are, really. Will They, Won’t They, and What The Hell Went Wrong are such universal narratives that we can’t help but scrutinize them. I was invested in the story, compelled to learn how things shook out, but I was slightly divorced from the feels involved as a result.

Even if I never returned to those dizzying heights and perilous depths of the beginning, I was still deeply satisfied by the end. On top of the compelling narrative, the puzzle design is top-notch stuff. Seeing an ornate golden key grow to the size of a passenger bridge never gets old, and the constant fluctuation between micro and macro is incredibly fluid. Oh, and the music is a non-stop parade of gut-wrenching strikes. Each track is a feather-light assault on your heartstrings, bringing you up or down with practiced ease.

Maybe there’s no healthy way to insulate yourself from heartbreak, but there’s still beauty in the retrospective. Maquette casts a rosy lens on a love story softened by time’s eventual passage. It’s an important lesson, that the sorrow of love lost can be soothed and sanded down by the steady movement of the clock. The story’s frequent puzzle breaks mean that you’re eased into the worst of it. You’re given a long runway before the inevitable climax, which might be a blessing in itself. Even if a reflective journey through a complex relationship doesn’t appeal to you, the intricate world and it’s fascinating puzzles will surely have you hooked. 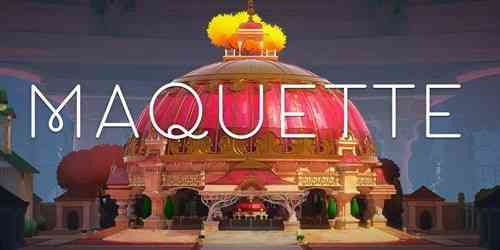