Encased is an isometric RPG that wears and bears its role-playing roots proudly. It does so but presents an entirely new story. The time is the 1970s, but a version of the 1970’s where the Cold War has ended not because of emerging countries and détentes, but because of the Dome. All the countries of the world shifted their attention to a previously unexplored desert, for there lies an area containing an anomaly of unknown origin.

A supercorporation called CRONUS is created to study the Dome, which then becomes the defacto controlling world body as individual nations vie to unlock the secrets of the Dome. You play as a CRONUS employee engaged in researching the Dome, hoping to determine its purpose and why the Forefathers who created it are no longer around.

You can approach Encased in several ways that depend on the character type and attributes you choose. Many outcomes are plausible depending on your play style, be it brute force, stealth, or tech-based. Further mixing possibilities up is a storyline that moves through time before, during, and after a crucial moment in the game’s timeline. Different choices will also occur depending on which guild, or in this case, wing you decide to become an employee for.

The five wings that you can choose from are color-based: Black – Military, Blue – Tech, White – Biology, Silver – Command, and Orange – Criminal. Knowing which wing you decide to work for is helpful for the character creation stage. Each Wing has Bonus Attributes you should know when creating a character from scratch. You can also choose from a set of template characters too. If character creation is your thing, you can spend hours crafting one that matches your tastes.

Characters have eight base attributes to build upon. These attributes include such things as strength, perception, courage, charisma, and dexterity. You can further increase your character’s prowess through two methods: abilities or traits. Characters gain abilities by progressing through the game, and experience allows you to accumulate Skill Points. These points are used to enhance such things as weapon and combat abilities or unlock High-Tech Weapons, Psionics, or Medical Knowledge to aid in healing you and your party members. There is also a passive way to upgrade your character, and that is done through traits. You must choose traits at the start of the game. Along with deciding which wing you wish to play, you will also need to understand how the Encased RPG system works. If you take the time to do so, fine-tuning your character through traits opens up some new storyline and combat possibilities.

How you experience Encased will depend on how you have crafted your character. A well-balanced character will experience one thing. Encased embraces different playthroughs if you decide to play the game as a thug, scientist, or even a serial killer. You can play the game without killing a single person or set out with the goal of wiping everyone out. You can even take a total stealth approach and interact with no one. Each path presents its own choices and challenges.

Besides your character choices, Encased has 4 different difficulty options to choose from. You can even play the game in story mode only all the way through progressively difficult options. These include a balanced classic or an intense tactical campaign that includes turn-based combat for RPG veterans.

Encased is presented in the classic isometric view and navigated via mouse and keyboard. When the game starts, you and a group of other new employees are taking an elevator down to the Dome to register. Graphics are clean and colorful and done in a retro-future style. You have access to all your information through a clean UI that uses easy-to-understand icons. Many of the submenus use tabs to prevent any single screen from being cluttered with too much info. The trade-off between screen clutter and menu navigation is handled well. 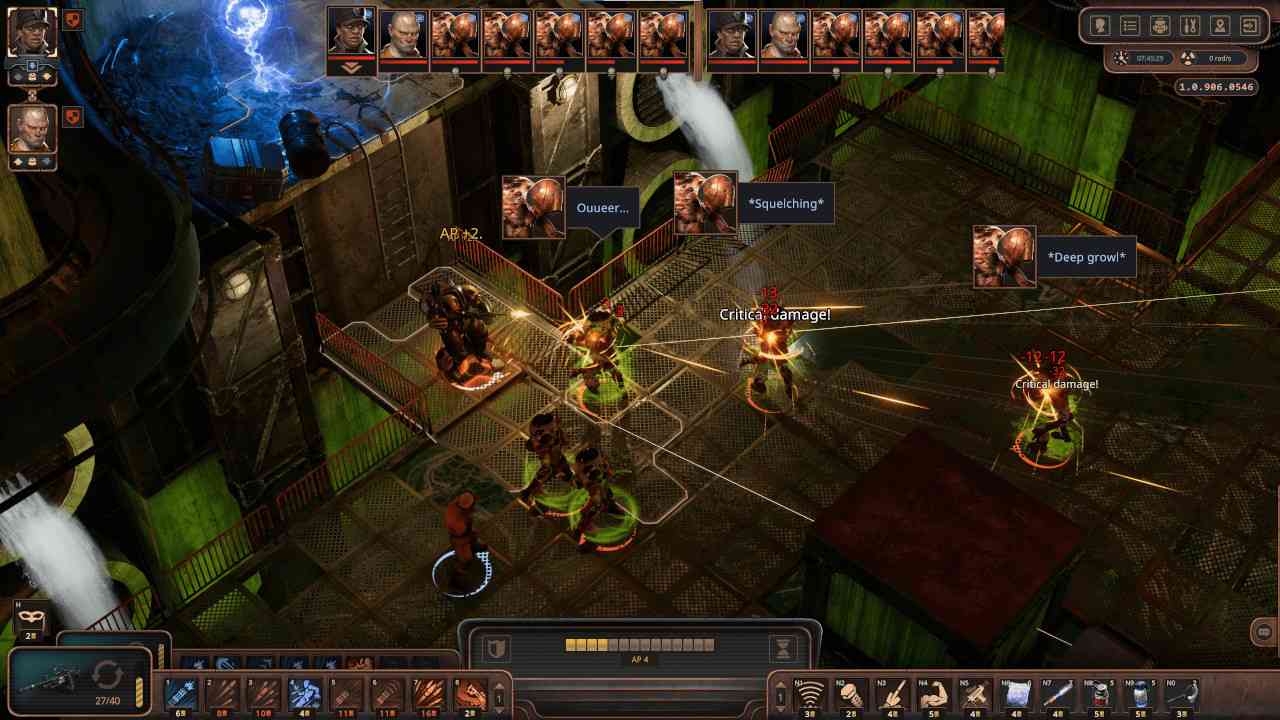 Encased uses toolbars on the main screen to keep UI clutter to a minimum. Fans of the Wasteland and Fallout series will feel right at home with Encased. It’s a classic RPG that treats the player to a brand-new story while following the established template for this type of game.

You can gain goods through several means such as buying or stealing, and your inventory is shared across your team. You also monitor things such as health, radiation, hunger, thirst, and fatigue. There are also options to manipulate time, barter, and companion selection, and balancing. Of course, there are also maps to use, be it the immediate area or world stage.

The game generously uses audio, including sound effects, voiced narration, and characters. Even though including voiced narration is appreciated, I turned it off after a while. There can be a lot of text and it became tiring to read ahead and wait for the narrator to catch up. It must be noted that the soundtrack is great too, really invoking the proper post-apocalyptic SF mood.

Dark Crystal Games’ passion for this type of game shines through in every facet. They have made every attempt to make the game as accessible to a wide range of players as possible. The game feels tight in terms of performance and I encountered no bugs. How much one will enjoy the game really depends on how much one will put into it.

*** Steam Code provided by the publisher ***