Publisher Headup Games have discovered yet another potentially amazing game that might be worth your attention. Developed by the relatively new developer, Pixel Perfex, Earth Atlantis is fun, side-scrolling shooter available on the Nintendo Switch. With an eye-catching art style, fast gameplay, and a unique nautical theme, Earth Atlantis could be a real treat for gamers looking for something a little different.

Note: COGconnected opted to wait for developers to release the first patch (1.0.1), as it promised to resolve some issues that we discovered when we first began our review. As such, this review reflects the most current version of Earth Atlantis (1.0.1).

It’s the end of the 21st century and the “Great Climate Shift” has taken place. Water now covers 96% of the earth’s surface and little remains of human civilization. This new future sees machines taking the form of nautical creatures, creating a sort of robo-marine life. Your mission as a “Hunter” is to pilot one of four different ships and hunt down a lengthy list of robotic sea-monsters.

Earth Atlantis features two modes of gameplay; Quest Mode and Hunter Mode, however, you’ll need to complete Quest Mode to unlock Hunter Mode. In Quest Mode, you’ll start with one ship (but later you’ll unlock other ships by defeating them during your adventure) and explore a massive underwater cave-system in a submerged New York area. Your ship starts with a weak, single shot, but as you kill robo-fish, you’ll earn power-ups that increase your weapons. Additionally, you’ll find special crates that offer various secondary weapons (such as homing missiles or electric shock). As you explore, you’ll come across various large monsters that you’ll need to defeat – doing so usually opens additional accessways creating an even larger area to explore. The controls were interesting, as you actually had a specific button to change the direction you were facing (left or right). With only one “shoot” button, the entire game can be controlled with the left thumb-stick and the L and R triggers. Simple, yet very effective. 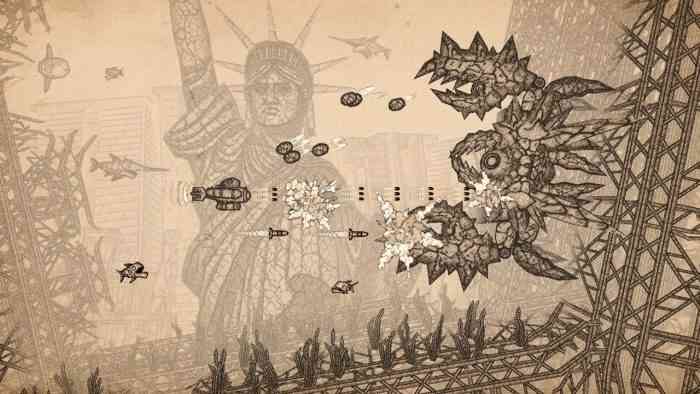 Upon completing Quest Mode, you’ll gain access to Hunter Mode which challenges you to defeat a set number of creatures within a specific time frame. It really doesn’t add much to the overall package as it’s still just more of the same – albeit a bit more challenging.  Both modes allow you to choose between Easy, Normal and Hard and the game keeps a record of your best time/score for each mode and difficulty. Disappointingly, there are no online leaderboards or multiplayer modes (local or online) at all. It’s worth noting that even on the games easiest setting, the game is still quite challenging. Bosses can one-hit kill you if they touch you, and there are a few bosses that move quite erratically and quickly – which can lead to some frustrating quick deaths. Death returns you to your nearest checkpoint and forces you to hunt down all your power-ups again. The other issue I noticed was how dull the game got after a while – primarily because you’re forced to go from one side of the map to the other, over and over again – and it just felt designed to artificially prolong the game.

“Visually, the game is absolutely stunning.”

Visually, the game is absolutely stunning. The game looks as though everything was hand-drawn in pen and features a simplistic yet effective monochromatic color scheme. While the game takes place on one large map, each section of the map has some unique elements to it to differentiate between areas. The most prominent is the beautiful Statue of Liberty submerged under the sea. I didn’t recognize any other recognizable New York structures, which was a shame since I was really hoping to see Trump Tower! In the audio department, I liked how the music changed from the standard “exploration” theme to the heavier “boss” theme whenever you did battle with one of the larger monsters. I didn’t come across any crabs singing about life “under the sea”, but maybe we’ll see some themed DLC in the future (joking).

I really, really wanted to enjoy Earth Atlantis – and I’d say my first couple hours were a blast. Visually it’s amazing and it had a simple yet effective gameplay style. Unfortunately, the need to constantly go back and forth throughout the map and some of the annoying bosses hindered my enjoyment. The lack of depth, beyond challenging the harder difficulty levels and the Hunter Mode, doesn’t help matters. However, the game’s ending definitely leaves the door wide open for a sequel, or maybe even some downloadable content. I also think that Global Leaderboards would have made a great addition. Earth Atlantis is a decent game and might be a fun impulse buy if you’re eager for something a little different. 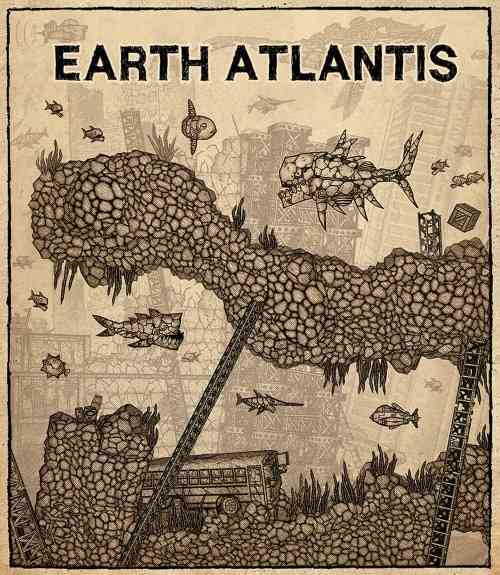