Nintendo has been slowly but surely breathing new life into their Wii U library by porting it over to the Nintendo Switch. The latest game to get this treatment is Donkey Kong Country: Tropical Freeze. Whether or not you’ve ever played it before, this latest foray into the land of Kong is an excellent investment.

The story is a simple one: DK is in the midst of a birthday celebration when the island is invaded by a winter-themed army. It’s up to you to travel from world to world, ousting these usurpers and allowing things to get back to normal. The narrative is paper-thin, but it serves as a vehicle for getting you to the action. This is Kong-style platforming at its purest. Even the motion controls of the previous iteration are now an optional mechanic. If you’ve no patience for such things, you never have to use them. This isn’t a pure port, however. Nintendo has made some modifications. The frame-rate is more stable and the resolution is higher. On top of that, there’s Funky Kong mode. If you find the regular adventure to be too much for you, you can start a file with Funky. He’s kitted right up with unique powers, extra health, and fewer weaknesses.

I spent most of my time with the game in the regular mode. I took a bit of time to experiment with Funky Kong and his powers, though I found they robbed the experience of any real joy. It’s hard to feel properly accomplished when you’re playing with a character who’s so powerful. Don’t get me wrong, he’s fun to use and his powers have been smoothly segmented into the existing game. It’s just a little bit too easy to be truly enjoyable.

On the other hand, the regular mode is still a Donkey Kong Country game, so expect a certain challenge level from start to finish. I found the bosses to be an especially tenacious roadblock. Most boss fights are divided into three separate stages, each of which you need to memorize in order to stand a chance of victory. It’s a good thing you get so many extra lives. I tend to spend between 8 and 12 of them on every boss fight. 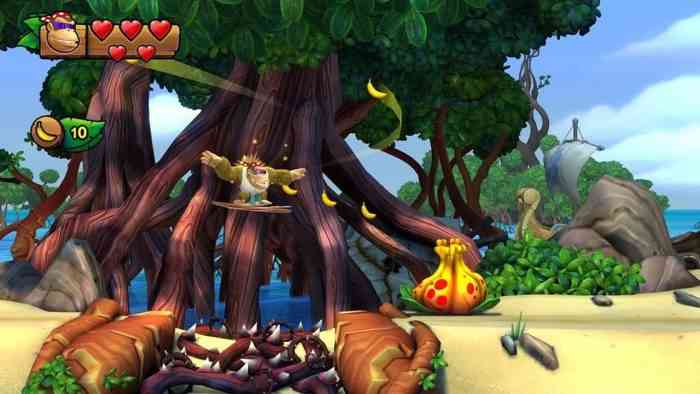 If you’re hurting for more lives, you can always buy them from Funky’s shop. Actually, I’m not sure what purpose they serve, as I’ve never run out of them and the game saves your progress automatically. Most of the banana coins I saved up got used on the Gachapon machine. Pointless, perhaps, but still pretty fun.

Having never played the Wii U version, I have little to compare this release to. However, I can say that the aesthetic presentation at work here is phenomenal. More than just graphical fidelity, every part of the world works in concert to keep you immersed. Individual animations, sound effects, and enemy physics all feel like small components in service to a complete entity. The controls are tight and responsive while also never giving you a moment to rest. The old design philosophy of the Super Nintendo games shines in earnest. In order to survive, you have to keep moving to the rhythms decided by each stage. Step outside of these musical borders and you’ll be immediately punished.

At first, I was hesitant to engage the motion controls. I have unpleasant memories of DKC Returns, a game I felt was hampered by their inclusion. Tropical Freeze doesn’t have this problem. The Switch’s Joy Cons are stuffed with some terrific motion-sensing hardware. Plus, they only do the one thing that I’m aware of. Rather than tethering too many critical functions to frantic movements, all they’re used for is DK’s ground pound move. If I recall correctly (I refuse to look it up), the previous game used the motion controls to the same end, but they still feel better here.

All of this is empty sound and fury if you’ve already got this game on the Wii U. Even if you’ve got the pedigree of a Nintendo die-hard, I can’t recommend double dipping for Tropical Freeze. While this is a terrific game, it doesn’t do enough to distinguish itself from the Wii U release. I’m the target audience, however. I never played the original, so all of this is fresh and incredible to me. If this will be your first time playing Donkey Kong Country: Tropical Freeze, you can scarcely afford to pass this up. With a fresh set of eyes, this is an absolute home run from Nintendo. 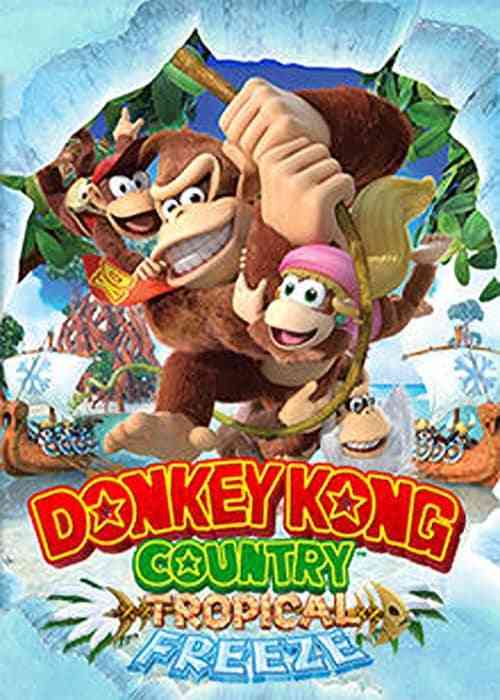