Deru – The Art of Cooperation Review

Last month, Deru – The Art of Cooperation was released to the public, adding its name to the ever-growing list of cooperative puzzle games on the Nintendo eShop. Being on the constant hunt for the perfect couch co-op game, I was eager to try this new title that showed so much promise, only to feel disappointed by the misleading gorgeous design and unexceptional gameplay.

Deru creates a cooperative experience with an objective that is as simple as its execution is challenging. Two players are assigned either black or white icons and are immune to puzzle objects and obstructions that oppose their own color — white players can only move their icons through black streams, and vice versa. The main idea is to help the other player reach their respective endpoint by blocking streams to create gaps for the other to cross through. Throughout the game, other mechanics come into play such as gaining the ability to place blocks down to plug up streams or making one player bigger or smaller than another to block larger objects.

For the most part, the puzzles are clever and unusual. The level progression, however, was very inconsistent and downright confusing at times, and there are numerous encounters that are just plain random. The game has five “chapters,” and each chapter has about eleven to fifteen puzzles. The levels don’t seem to increase in difficulty consistently — for example, one level will be so challenging it takes a few solid tries, and the next will have you just running around a cloud of shapes that never relate any meaning, finishing after no real puzzle even asked to be solved. 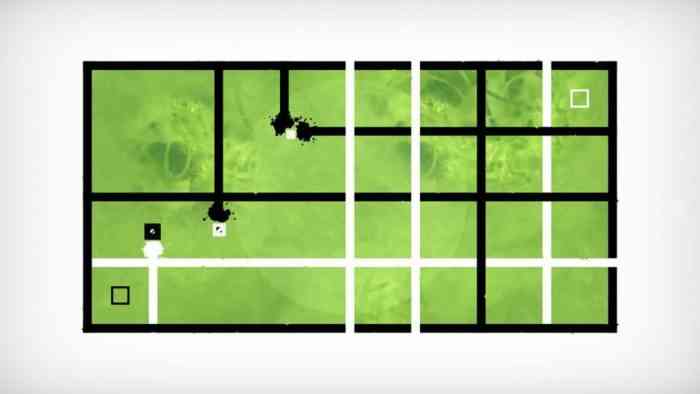 The randomness of this level progression correlated pretty directly with the experience my partner and I had. A few times, the puzzle was so difficult that we had to physically stand up in front of the TV to illustrate different strategies to the other, like a professor pointing to different items on a chalkboard. Other times, we sat there befuddled, wondering why the level we had just completed so late in the game was that easy or what the meaning of the random shape encounters we had just witnessed were. I quickly learned it was not worth pondering for too long: Deru doesn’t need to (nor does it strive to) make much more sense than its don’t-touch-your-own-color objective.

If there is one thing that can be agreed upon about Deru, it is that it is undeniably pretty. Aesthetically, it is minimal and utilizes mainly black and white objects, with gorgeous bursts of color built into the backsplashes of the game. The abstract style had my partner oohing and aahing in admiration in between curses and laughter at our sometimes-ridiculous puzzle predicaments, and the game is easy to see on the undocked Switch screen. The accompanying audio also perfectly matched the modern, relaxing tone of the game.

While the presentation of the game is gorgeously crafted and the execution is polished, the gameplay itself struggled to capture my attention. Playing with a partner, the game gave us some good laughs and about an hour or two of entertainment before we had enough. The experience feels much emptier in single-player and doesn’t offer enough stimulation to beg for a return — an identical sentiment to how it feels in two-player mode as well. While it did keep us busy for a short while, neither of us felt any need to ever pick it up again. In the plainest of terms, it just simply wasn’t fun enough.

To elaborate, Deru is lulling and redundant, despite the new mechanics that are picked up along the way. The puzzles could be more exciting if there was more urgency or some personality to attach oneself to, but the lack of narrative, characters or overall endearing tone makes for an experience that does not pull you in or give you any reason to feel attached. It feels more like an exhibit at a modern art museum; one you might stop, interact with, and appreciate for a few moments but leave and never really let it cross your mind again. Suffice to say, Deru was a cool little thing to experience for a few moments, but became boring relatively fast and did not compel me to want more.

At the end of the day, Deru may be too challenging for small kids and too unstimulating for adults. To its credit, it has an absolutely beautiful delivery and the abstract puzzles are a nice and unexpected idea. Though the price tag on the game is pretty modest, the gameplay is very short — less than four hours from start to finish — and may not be worth the purchase for players seeking an exhilarating experience.