With the boom in indie PC games, you’d think grid-based tactics games would be all the rage. It’s a pretty simple formula, but there’s a lot you could do with it. After all, have you ever heard of a little game called XCOM? But it’s only recently that tactics games have really taken off, and while Depth of Extinction borrows a little from here and there, it tries to forge its own identity as a strategy game.

In Depth of Extinction, you are a team of submarine mercenaries fighting your way through undersea bases. The theme seems rife with potential. A bunch of Jason Mamoa-looking meatheads with weird weapons kicking down hatches and fighting merefolk? Hell yeah, sign me up! The actual game though feels surprisingly tame and subdued. The style looks less like the bonkers trailers for the upcoming Aquaman movie and more like a red meat 80s action movie, and not one of the really good ones with Sly Stallone or Schwarzenegger…but not Steven Seagal bad either. Maybe a van Damme?

Anyway, you command your mercs through a series of roguelike maps, some with different objectives. You’ve got to keep track of your sub’s fuel and your equipment, both of which you can get more of from missions. You also get XP, which you can use to level up your dudes in a variety of classes, each of which is confidently unique. This is actually the best part of the game. All of the abilities are on-point, and soldiers come to feel like their own people. 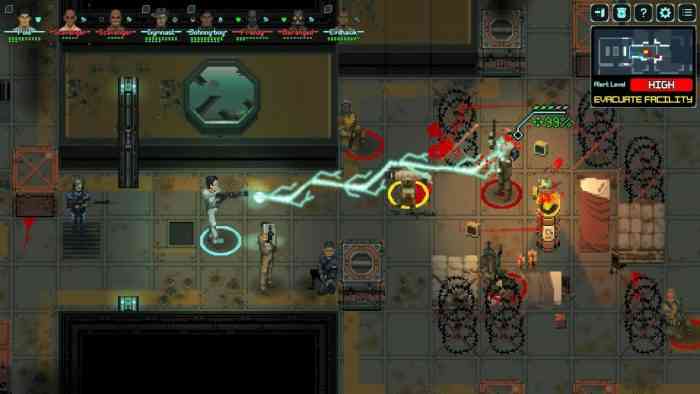 Of course, there’s no customization. You can’t even change their names. Which sucks, because obviously the best way to play these games is to name everyone after friends from work and watch them get mowed down by pirates. It seems like an oversight. And it’s not the only one. Though I have no doubt that Depth of Extinction was a labor of love, some of it feels sloppy. You traverse the map in nodes for example, and then once you get into a node, there is a further system of nodes. I don’t know what the nodes are here to represent, so putting another set of nodes in the nodes…? Why call them the same thing? Why design the game like this at all (we heard you liked nodes so we put nodes in your nodes)?

The tactical combat is the core of the game and fortunately, it is well constructed. Unfortunately, it feels a little basic. While you can level up characters and get some cool abilities and weapons, basic stuff like traversal never got my heart racing. Positioning characters behind boxes for cover lacked the high stakes of every turn of XCOM. There’s nothing wrong with the combat, but for Depth of Extinction to really sing (a whale song presumably), combat needs to be fast paced and tense. As it is, it’s functional.

A lot of the talk around Depth of Extinction has invoked XCOM and FTL. That makes sense, as both are the pinnacle of what they are trying to do. There’s no better squad-based tactics game than XCOM, and FTL broke new ground on roguelikes centered around a crew on a ship. But those are tough shoes to fill. Depth of Extinction has about half of what makes XCOM good, and half of FTL, but that doesn’t add up to a whole. It just feels like two half games with interlocking systems. You can see where all the good ideas are: having an emergent story is cool. It’s even a pretty good story. But it doesn’t achieve that perfection you get in a game like Into The Breach, where every offhand line of dialogue makes the world feel like a wide, wild place.

I don’t like being so harsh on Depth of Extinction. I really wanted to like it more than I did. It’s just so full of potential. Each system has so many clever ideas… but the fundamentals aren’t there. This is the first game from HOF Studios and it proves they are a team to watch. But the main measure of a game like this is how much you want to keep going. Do you always want to play just one more turn? When you close your eyes at night, do you see little soldiers marching across a grid? You don’t. Depth of Extinction is clever, but a little shallow.


XCOM 2 Collection (Switch) Review – Turn Based Gloriousness On The Go