Bandai Namco’s 3D fighting games live or die on the strength of their characters. More specifically, on your connection to those characters. These games are, by necessity, homogenized through accessibility. In order for the average franchise fan to be able to pick them up and have fun, the playing field has to be a bit flat. A part of me knows this to be true, yet I can’t help feeling like My Hero One’s Justice breaks that formula, if only a little.

Full disclosure: I absolutely love this show. Rather than compromising my objectivity, I think this prior relationship helps inform my theory. You have to love the show, the manga, the franchise, in order to really connect with the game. That goes for any of Bandai Namco’s wide-open fighters. And yet, One’s Justice still feels… different, somehow. The characters all feel distinct, the mechanics properly reflect the source material, and visuals are an exuberant nod to both the anime and the manga.

Not Your Average Shonen Jump Fighter

Let’s talk about Midoriya. In the show, he’s an impulsive do-gooder whose power and skills don’t match up whatsoever. In this game, he’s somehow the same. Compared to his classmates, his move set feels jacked-up and clumsy. There’s heavy follow-through to contend with, and each strike needs to be well planned. Bakugo on the other hand is a volley of relentless violence. You just aim him in the right direction and feel the appropriate level of pity for his opponents. Todoroki requires a little more skill, but the payoff is immense in return. If you can strike a balance between his fire and ice moves you can utterly devastate your enemies. Every fighter is built this way, a love letter to the character and their quirk. 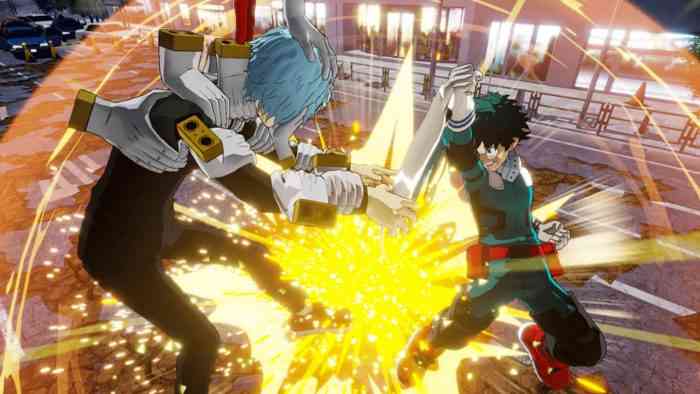 For a short while, Todoroki was causing me intense frustration. I was constantly failing to pull off his ice attacks. After a series of near defeats, I noticed that his fire moves caused my opponent to briefly glow red. Finally it occurred to me that they were so hot, the ice wasn’t trapping them. This is by no means the only well-crafted detail in the mechanics. If you’re going to give everyone crazy superpowers, why not have them make a tiny bit of sense? Throw in some logical consistency, just to shake things up. It’s a wise move that makes me want to experiment with every single character in a similar fashion.

If you’re not well-versed in the My Hero Academia story before playing this game, the Story Mode will leave you lukewarm. Indeed, One’s Justice assumes you’ve seen more or less every episode of the anime. Which I have! But my experience doesn’t reflect everyone else’s experience. Although to the game’s credit, the proper use of comic-style exposition does an excellent job of catching you up. The downside to the Story Mode is that you end up repeating a lot of fights between the two halves of the narrative. While I was paying attention the first time, I was pretty checked out for the second half. Thankfully there’s other game modes to keep you invested.

Both the Arcade Mode and the Missions do a good job of keeping you on your toes, challenge-wise. Even after beating a given challenge, I was immediately ready to go back and get the S rank. It’s a little silly, but I couldn’t leave the map incomplete. There’s not even a big reward for getting everything done, unless you count customization items. Which you should, because decking these characters out in the silliest possible outfits is a worthwhile cause.

Though the story mode gets to be a little dull, the fights themselves are consistently fresh. That is, unless you’ve played enough of these Bandai Namco fighting games. This is the tough part for me. I love this franchise and all it produces, but I recognize that a lot of this content is repetition built on more repetition. If you’re not enamored with the characters and their arcs, this must come off as a murderous grind. Here then, do we arrive at the core truth behind all good fighting games: repetition also leads to skill and mastery. For me, this was never something I could arrive at with any of these other games. Your Dragon Balls, your Narutos, your One Piece pirate beatdowns. It was One’s Justice that helped me find the actual fighting game underneath all these franchise trappings and familiar frameworks.

This is going to make me sound insane, but I never saw these titles as fighting games until now. They were just flashy vehicles for whatever Shonen Jump series Bandai Namco had gotten the rights to. And yet, underneath all that is a complex yet accessible game that rewards exploration, experimentation and practice. A proper fighting game, in other words. If you’re looking for another 3D fighter, give this one a shot. If you’re a My Hero Academia fan however, you absolutely can’t miss My Hero One’s Justice. This could be the start of something beautiful, after all.

*A PS4 code was provided by the publisher*** 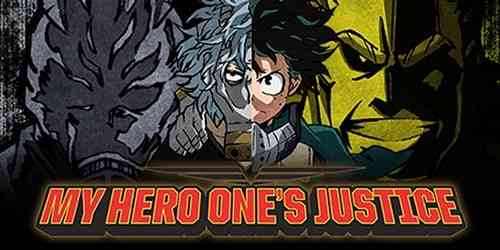