My first excursion with tower defense games began with a custom fan made game of Warcraft 3.  Organizing tower placement and watching hordes of orc peons fall from my elaborate tower layout satisfied my inner Napoleon. Defense Grid 2, developed by Hidden Path Entertainment, offers up a stellar console edition of a type of game typically found on PC. With features that boast great replayability, alongside a surprisingly solid narrative, Defense Grid 2 is worth your time.

I’ll admit that when going into Defense Grid 2 I carried a preconceived notion that many tower defense games offer shallow and repetitive missions that plague an otherwise enjoyable experience. In Defense Grid 2, I found a well-crafted balance of difficulty and unique map layouts peppered throughout. Each time I began a mission I encountered a fresh crisis. The pacing is what allowed for this experience to excel. Variety in mission structure is great, offering the fun factor that you would come to expect from a full-blown AAA game. 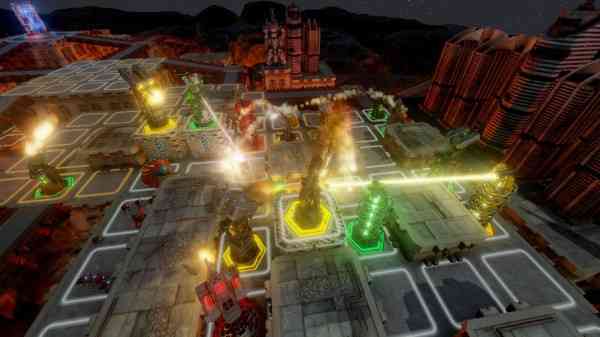 The storyline revolves around an aggressive alien race driving humans to find a new planet to settle in before they are annihilated. The story doesn’t appear to take itself too seriously, being tongue-in cheek most of the time. The light comedic elements feel right at home in Defense Grid 2’s sci-fi setting and the story telling is just deep enough to make the campaign actually feel like it has some legs. The game offers a startling amount of content all things considered. I was easily able to spend upwards of 10 hours on the campaign alone. The campaign features 2-player co-op play, which I highly recommend playing, as it is a blast.

As referenced earlier, the levels received a lot of attention from Hidden Path Entertainment. One such example would be the levels that actually move around during battle, challenging you to think on your feet and develop a new strategy for the inbound enemies. Furthermore, Defense Grid 2 features two types of stages, one with predetermined tiles set up adjacent to the enemy path and one where the field is effectively an empty grid, allowing you to creatively place towers to lengthen the enemy’s route. In regards to the latter, doing so allows for your towers chip away at enemies for a greater length of time, ensuring a smoother victory for you. Though both formats offer fun in different ways, I prefer the empty grid setup. It gives way to some truly unique strategies. All in all, I would’ve enjoyed seeing more levels incorporating the transforming stages and I’m hoping to see more of these in future DLC.

The towers and enemies found in Defense Grid 2 don’t really break new ground in terms of what most gamers who are familiar with this genre have come to expect. Much like the old Warcraft 3 custom scenarios I referred to earlier, you can expect to find the affordable yet weak tower to be used as your bread and butter in the beginning of most missions. Stepping up from that you’ll find the cannon tower, which is really powerful but is equivalent to a slug in terms of its rate of fire. Upgrades are available, offering various layers of customization. Ultimately you’ll want to be upgrading your towers frequently to combat the increasingly tough baddies that you’ll be staving off wave after wave. Thanks to good design, you won’t encounter a tower that renders all other towers useless. You need variety in your towers, as some towers will exclusively target stealth enemies, or healing enemies, while others will be useless against them. The controls felt solid, which surprised me. I expected a rough translation of the control scheme moving from PC to PS4, but upon familiarizing myself with the layout I felt right at home. 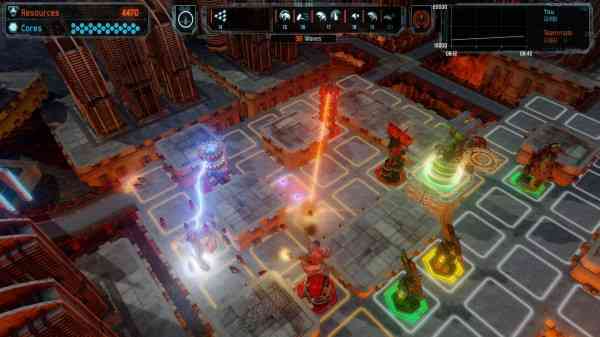 Online multiplayer offers both cooperative and competitive modes. Additionally, several difficulty settings are available. I did notice that it often took quite a long time to match up for missions with other players, but the game allows you to play campaign missions while waiting. Competitive missions are fun, but I do feel that the cooperative battles generally offer the best experiences. They often remind me of the sense of panic found during a session of Left 4 Dead, when hordes of enemies are inbound and all you can do is spit out a strategy within a few seconds.

Visually, Defense Grid 2 isn’t anything to phone home about. Details are decent, and textures look pretty good, but the shading and lighting leaves much to be desired. Considering the strength of the PS4 I expected more. The game is by no means ugly, but visually it’s lacking a lot of the wow factor that many new games are bringing to the table in terms of graphics. On the bright side, the frame rate is silky smooth and in a game like this is one of the most important visual aspects. I do wish I could zoom in to appreciate the design of the aliens and towers more, but the game doesn’t allow for much camera angle shifting. When upgrading towers, visual changes can be seen, but I’d love to check them out more often.

Defense Grid 2 ‘s gameplay is fun enough to deserve some of your time, even though the visuals aren’t what you might hope for on a next-gen system. The game offers an impressive amount of variety in its missions, and coupled with great multiplayer, it’s a solid experience. The strong narrative is icing on an already tasty cake, and the smooth frame rate and comical writing seals the deal for me. If you’re a fan of tower defense games, and own a PS4 (or Xbox One or PC for that matter) Defense Grid 2 takes everything you’ve grown to love about these games, and elevates it to the next level.