Super Smash Bros. is a fan service game in the best possible way. It’s perhaps the grandest celebration of all things Nintendo, and that’s okay by me. Not only is Super Smash Bros. an incredibly fun and addictive game, it’s also a sort of digital museum that takes you through the proverbial tombs, coffers, and churches of nostalgia. It brings the new and the old together, and combines it in a way that appeals to anyone who has ever picked up a video game controller. Despite its obvious “everyone” appeal, Smash Bros. has also built up an impressive competitive community dedicated to unlocking every little nuance hidden within its mechanics. The fourth, and newest entry in the Smash Bros. franchise on the 3DS has even earned an appropriate nickname: Sm4sh.

It all started a number of generations back on the N64 when Nintendo finally ended all of the schoolyard debate of “who’s stronger”. Since those humble days Smash Bros. has exploded and become one of Nintendo’s flagship titles, adding characters, arenas, and items from newer IPs, and even some characters and arenas from third parties like Sega, Namco, and Capcom. The gameplay, as many are familiar with, has one to four players fighting one another in themed arenas until certain criteria have been met. The two primary game styles are time battles and stock battles. Time battles have each player continuing to fight until the time runs out, the winner being the person who collected the most kills. Stock battles give each player a set number of lives. The last person standing takes home the crown. In each of these modes there are familiar items that can be used to help whoever picks them up. These include Pokeballs, Red and Green Shells, Banana Peels, Beam Swords, Bob-oms, and the ever malevolent baseball bat. 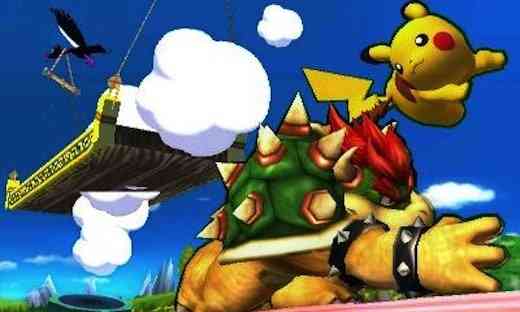 The most prevalent new feature in Smash Bros. for 3DS is Smash Run. It takes the Smash Bros. gameplay we’ve all become accustomed to and given it an interesting new twist. Each of the four competing players, be they human or CPU, are dropped in a large open map with only a single goal in mind; kill as many baddies as you can before the time runs out. When these bad guys, consisting of various popular villains from Nintendo’s collective universes, are defeated they drop stat boosting upgrades for the player that killed them. These stats include attack, defense, and speed. Upgrades take effect in real time, helping you gather more upgrades with greater efficiency as the time limit elapses. When the timer hits zero players and all of their upgrades are pitted against one another in one randomly chosen event. There’s a classic free for all match, a horizontal race to the end of an obstacle course, and a vertical race up a tower, just to name a few.

Unsurprisingly, many traditional game modes return in Smash Bros. for 3DS as well. Two of these that many will recognize are Classic Mode and All-Star Mode. Classic Mode is a Smash Bros. staple that takes you along a chain of random battles against CPU players. As with all titles before it, your journey will lead to a final battle against the recurring series villain “Master Hand” and net you a trophy of the character you took through the mode should you defeat him. What’s new in this iteration of Classic Mode is that instead of taking the same linear path you always do, you get to choose a path to follow. After each completed battle, you are given an intersection of three roads. Each road gives different rewards such as currency or trophies.

All-Star Mode seems mostly unchanged from previous iterations, with the biggest mixer coming in the form of the order in which you conduct your fights. As is tradition with All-Star mode, you must square off against several teams of CPU players without dying even once. Each team consists of six or seven members. This time the teams are constructed and thrown at you in chronological order, meaning that the first team consists of the old characters, like Mario and Pac-Man, and the newest team has Pokemon’s Greninja. You must do your best to take as little damage as possible throughout the course of All-Star mode as you will retain your remaining health for each subsequent match. 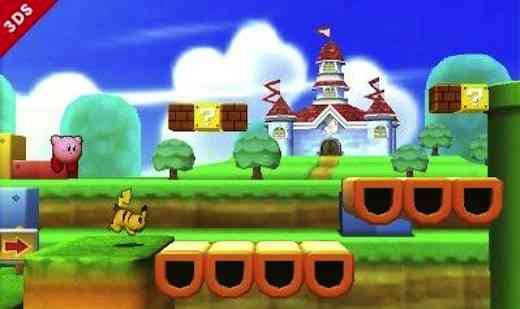 The stadium returns and brings with it several familiar game modes such as 10-man, 100-man, Cruel smash, and the Home-Run contest. To bolster its ranks, the multi-man smashes now have a new game type; Rival Smash. Rival smash pits you and a computer player of the same character against one another in a competition to see who can get more kills. The game mode continues until you fall off the edge. Your final score is calculated by taking your total kills and subtracting the total kills of your rival.

An entirely new game mode in the stadium is Target Blast. The goal is to use the bomb set in front of you to destroy as many targets as possible. Target Blast functions similarly to the traditional Home-Run contest, having you attack the bomb to rack up its percentage making it easier to launch. The hook with this however is that the bomb comes complete with a ten second timer. This adds a surprising level of strategy. Attack it a few more times and risk it not traveling far enough? Or play it safe and potentially miss your target? It’s up to you.

Every new entry of Smash Bros. brings a new way to gather the series signature collectable trophies. In this 3DS version it comes in the form of Trophy Rush. Trophy Rush sets you in the middle of a generic platform and immediately starts dropping boxes on you. Destroying boxes will slowly build up a sort of “bonus meter” that when filled activates a Trophy Rush! While Trophy Rush is active, the sky will rain special blocks with images of coins, trophies and custom parts that must be smashed to claim their beautiful goody filled centers. Trophy Rush also features a number of other special styles of block. There are stone blocks which prove a bit harder to destroy than their wooden cousins, golden blocks that will fill a hefty chunk of your bonus meter, bomb blocks that will explode when they are smashed and more potent “nuke” style block that must be eliminated before it goes off. Trophy Rush costs in game currency to play, and can have its timer extended the more money you put into it. Be careful not to fall off of the stage though; if you do, you lose fifteen seconds off of your timer and any block that was sitting on your platform at the time. 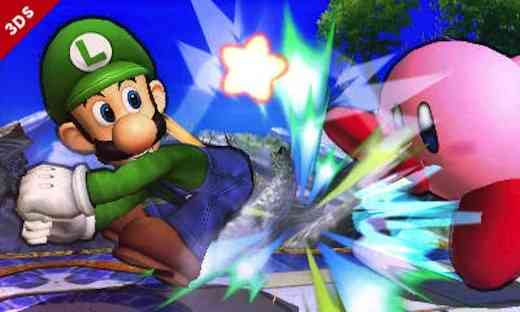 While Smash Run was the biggest new game mode addition for Smash Bros. on 3DS, the biggest game changer in terms of core gameplay is customizable move sets. For those of you familiar with Super Smash Bros., each fighter has four special attacks that can be used by pressing “B” and any of the four directions on the joystick. This time around, those moves can be modified into one of three variants of the same attack. For example, Link has his standard bombs, but now he also has a heavier, more powerful giant bomb, or the spike bomb which will send your opponent hurdling downwards upon contact. Each character has this for each of their four attacks, effectively tripling their potential move sets and possibilities. Custom characters like this can also be equipped with special equipment that will alter their overall speed, attack, and defensive capacities.

StreetPass features are difficult to get an in depth feel for when there isn’t anyone else around to StreetPass with. Luckily, Streetsmash, as it’s been so aptly called, features a practice mode. When you first open up the Streetsmash menu you’ll be prompted to pick a character avatar and a slogan. Streetsmash puts you and as many people that you’ve streetpassed down on an arena in the form of a sort of top. Your top will wear the avatar that you’ve selected for your profile. The objective of Streetsmash is to knock all of your opponents off of the stage before they get you, not unlike a regular match. This game mode is played from a top down perspective, and can have as many as ten people battling at once. Combat works much like in a standard game of smash. You attack your foes by holding and releasing the “A” button. The longer you hold, the stronger your attack. You can shield by pressing “R”, and dodge by flicking your joystick to the side while shielding. You can also unleash a devastating counter attack by attacking the moment after a dodge. Timing is absolutely key in this mode. The more people you knock off before falling off yourself, the bigger the reward you claim at the end.

Another returning feature from Smash Bros. on the 3DS’s predecessor Smash Bros. Brawl is challenges. Challenges are hidden rewards that can be unlocked by completing certain feats. These challenges range in difficulty, starting simple with things like beating 10-Man Smash. These challenges gradually ramp up in difficulty, or simply in time consumption.  Beating Classic mode with each character on the roster is simple enough if done on easy, but will take quite some time to accomplish. Some of these challenges will reward you with a special hammer which can be used to break open a challenge “window” that they have not yet finished; effectively bypassing the challenge altogether. 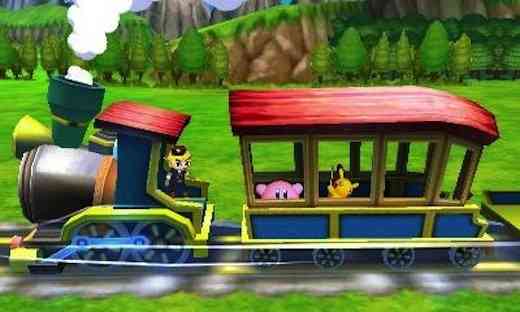 It’s also worth mentioning that online play is where this game gave me my biggest surprises (I couldn’t play anyone 3DS to 3DS as no one around me had the game during my review). At no point did I experience any lag. It was completely seamless from front to back. I will admit that I had my worries, but after a couple of rounds, that quickly went away.

It’s a lot to take in, but I’d like to quickly touch on the games sound and visuals. The game runs at a cool 60fps at all times, and looks beautiful doing so. With so much going on screen I had my doubts, but it plays very fluidly. The 3D effect also works, but some will prefer it off. Smash has a wonderful way of bringing all of the diverse art styles from across Nintendo’s broad library together and meshing them into one neat package. Some of the most iconic musical pieces from the past 30 years are here too, and included is a mode to listen to them outside of play in a sort of MP3 player format. Visually and aurally this game rocks, plain and simple.  In some ways it’s a high mark for the 3DS as a whole.

Having gone through near every game mode in this review there isn’t much left to say. Nintendo’s newest treasure lives up to its predecessors and improves upon the formula in well thought out and engaging new ways. Being the first of its kind on a handheld, and the newest in a series beloved by so many, Super Smash Bros. for 3DS is destined to be a house staple for years to come.