Persona 4 Arena Ultimax is packed with an amazing amount of features and content that all deserve to be covered. So, let’s break it down. There are four areas you can fiddle around with that each branch out to different modes and content; The Story, Battle, Network, and Practice. 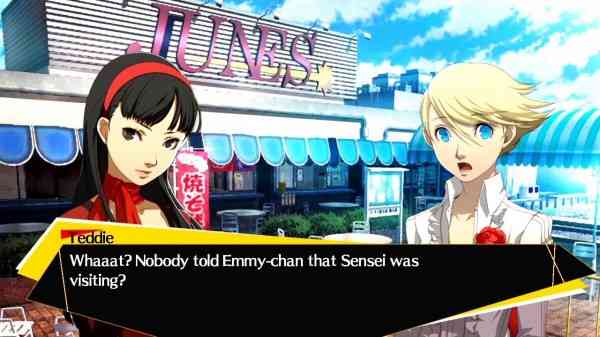 The story takes place a couple of days after the events of Persona 4 Arena in which the Midnight Channel has returned with General Teddie hosting the P-1 Climax yet again. What’s the difference this time? Well, battles aren’t occurring in the TV world, but instead the real world. As a red fog creeps into Inaba, the Persona users battle and venture through this new event with all they got. This is such a treat for Persona fans as it follows the same story telling ways as its predecessors and brings back the loveable and dynamic characters from Persona 3 and 4. Voiced dialogue, stills of characters and places, and cutscenes all fuel the progression of the story. If you have no prior knowledge of Persona 4 or Persona 4 Arena don’t worry, instead of not understanding what’s going on you’ll just under appreciate the little details of how certain characters interact with each other. The story itself is quite simple, and does briefly remind players of what occurred in Persona 4 Arena at certain parts, but to really appreciate the little details you do need to play a good amount of Persona 4. Nonetheless, new players can still get a good grasp it, but if you’re really concerned there is a DLC that lets you play the entire story of Persona 4 Arena.

While the story is full of humour and fan service, I’m surprised how detailed and long the dialogues are. It takes quite a bit of time to get to an arena and battle it out against a CPU, which can be taken as a good or bad thing. It’s great to see such detail and depth, especially in a fight-focused game, but it might be a little too long for people who just want to mash some buttons. Not to worry though, the dialogue can be skipped. Also, it’s an entertaining story so it’s not painful to listen or read through if you have the time!

Moving onto Battle, four modes are available: Arcade, Score Attack, Golden Arena, and Versus mode. In Arcade Mode, you work through stages unravelling events here and there depending on which character you choose. It’s a fun and classic fighting game mode that everyone can enjoy. For those who want something more competitive, Score Attack is where you battle ten times and try to aim for the highest score possible. For a challenge, Golden Arena is the “survival” mode of the game and it blends RPG aspects and social links to create a more complex and new style of gameplay. Level up and allocate stats to increase your health and pick a partner to improve your social link with and acquire ability bonuses. Lastly, Versus Mode is where you can fight against a local player, or the CPU, to the death. So, other than the story mode there are other options for your single player needs that are just as fun. 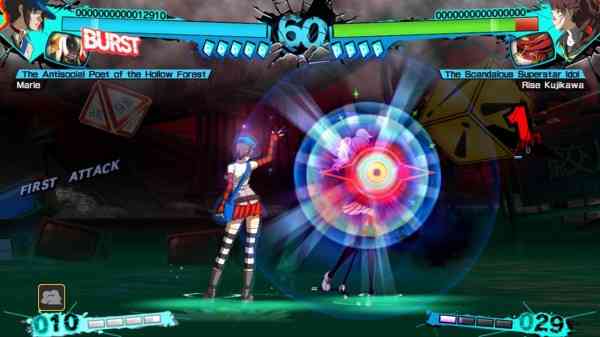 Network embodies the such modes as Player Match, Ranked Match, and Lobby. Player Match and Ranked Match are the default modes in usual fighting games and where you fight against players, casually or ranked, from all around the world. The quirky Lobby mode is where the mingling happens. Exclusive to the PS3 version, Lobby mode lets your avatar walk around an arcade lobby to talk and battle people through an arcade machine, just like in an actual arcade! It’s a mode where people can chill and meet other Persona or fighting game fanatics. A “past met players” list, ranking board, and P-Card edit (A profile people online can view) are also found under Network, but these are quite self-explanatory.

What’s a fighting game without some practice? There are Lesson, Training, and Challenge modes that sharpen up your button mashing skills while getting you accustomed to the fighting mechanics and combos. Lesson mode is where you should start off as it’s a quick and concise tutorial that teaches you all the basics for getting started.  Training is your common mode where you unleash your moves on a dummy CPU. Lastly, Challenge mode is where you complete specific sequences of moves to advance to the next challenge. It’s an advanced training mode if you’re interested in learning more complex moves and combos.

Since Arc System Works has worked on the BlazBlue and Guilty Gear games, you’ll recognize the sprite style and mechanics if you played any of their games before. The controls and actual gameplay don’t steer too far from its predecessor with exception to little tweaks here and there. Other than the characters being balanced out, the addition of certain characters having their shadow-type playable and new characters, there isn’t a lot of changes. Shadow-type characters have the benefit of gaining more SP per attack and thus the ability to unleash powerful moves more often at a faster rate. Their SP also doesn’t reset to zero each round, but carries on! Furthermore, they have a “Shadow Frenzy” mode where they can use as much SP they want for a certain amount of time. This can really turn the tables in a match. There are some downfalls that include not being able to use bursts and having slightly weaker attack damage, but overall it’s quite deadly. 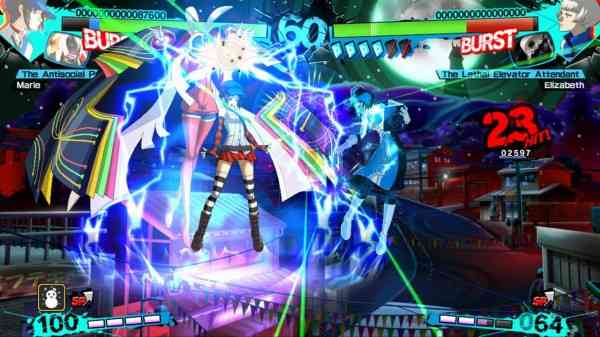 Visually, the P4AU is stunning. The bright colors and art style remain from past games and just put into a fighting game scenario. Arc System Works did a fantastic job putting the characters in motion on the battlefield with each punch and kick. Whether you’re in a cutscene, looking at a character or background still, or during a fight, the visuals do not fail. You can even go to the gallery to get up close and personal with some illustrations.

The soundtrack, voice acting, and sound effects are all pleasing to the ears. There are original and remixes of past Persona music as well as some new tunes. Everyone should be able to find something they will enjoy. The music is so pleasing you’ll be that person online taking forever to pick the song you want for a specific stage. The original voice actors for the Japanese and English versions of Persona 4 return and don’t slack off one bit. Although there is an option for Japanese voice acting, it is limited to in-game fights only and doesn’t extend beyond that.  Finally the sound effects result in your moves having a tremendous amount of impact and power. From guns or a special move to a mere slap, the sound effects make each battle entertaining to listen to.

Persona 4 Arena Ultimax is packed with an amazing amount of content and detail that fans of the series can fangirl/fanboy over while newbies will question why they haven’t invested their time in the series yet. P4AU takes all the good from Persona 4 Arena and tweaks it up while adding some new content to create a winning formula that everyone will appreciate. Whether you’re in it for the fights or the characters, Persona 4 Arena Ultimax shouldn’t just be on your mind, it should be in your hands