Tablets are an interesting piece of technology; they are used for productivity, entertainment, and keeping in touch with the happenings of today’s world.  What is clearly evident is that that more and more people are carrying them around and using them in their homes.  Gaming is also becoming more popular on these smaller screens.  The problem with gaming on a tablet though is that usually games are just ‘mobile’ games designed for tablet and OS of choice.  Well, things seem to be changing as Activision has released Skylanders Trap Team for various tablets.  For reference sake, my son and I have been playing the game on the iPad Mini Retina.

What is special about this game is that it is not a companion game or afterthought, it is a full console experience with all the content and most of the features that are found on the Xbox One, PS4, or any other console that it has been released for.  This is pretty impressive when you consider that the game is on DVD and/or Blu-ray discs for the consoles that it is currently playable on.   And if you’re reading this review and wondering what Skylanders is, well, where have you been?  In Skylanders you place toy figures on a portal and they come to life in the game and on screen.  It is as simple as that.

Skylanders Trap Team keeps much of the same Skylanders formula as you are once again fighting evil and saving the world of Skylands.  This time you take on the role of the legendary Trap Masters who defeated the evil Doomraiders a long time ago.  Kaos is back yet again, as he breaks the Doomraiders out of Cloudcracker Prison in order to gain their assistance.  Kaos believes that these villains will help him to pull off his evil plan; however, they want nothing to do with him as they have their own agenda.  So, as a Portal Master, it’s up to you to “wrangle” in these villains, and other enemies, with the traps at your disposal.

One of the great things about the tablet version is what you get in the retail package. You get access to the game on the App Store, a portal, some figures, a couple of traps, and a controller. The portal has a notch in the side of it where it can hold a tablet upright like a TV. It’s a neat feature and something that many will overlook as a great feature.  As for the controller, it’s decent quality and good to use.  It is designed in a Skylander like motif and has twin analog sticks, a d-pad, along with a full set of face and shoulder buttons.  I found that after a minute or two I didn’t even realize it was a controller designed for a tablet.  It stores neatly in the bottom of the portal for portability (hey, that almost seems like a pun or something).  My 8-year-old son found it perfect too, and as this game is targeted for the younger members of the family this bodes well.

The main draw of Trap Team is ‘trapping’ enemies.  Certain sequences let you trap enemies into a “Traptanium Trap” and once you do they become good and join your stable of playable characters.  With the trap in the portal you can tag between the Skylander you are using and the enemy in the trap with the press of a button.  The enemy has a timer and once depleted you’re back to your Skylander.  Capturing any one of the enemies is part of Trap Team’s magic.

On a side note, all Skylanders figures are compatible with Trap Team.  Families that have been collecting any of the figures since the original Spyro’s Adventure and beyond can play with those characters in Trap Team on the tablet, which is a pretty neat feature as there will be over 200 figures to choose when all is said and done. 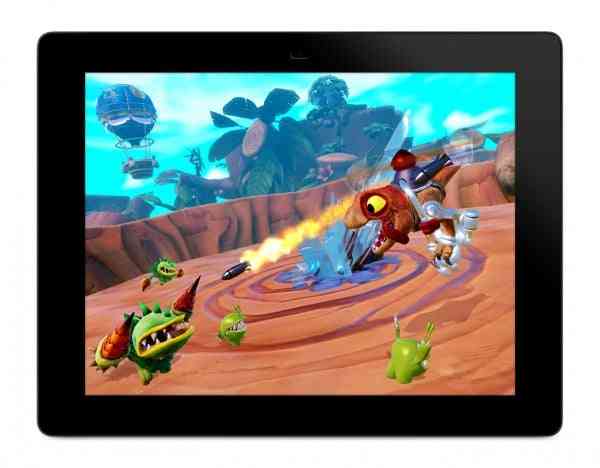 Gameplay wise Trap Team on the tablet is feature for feature the same as the console version.  That means you’ll have the same number of levels, same story, and same gameplay experience that people playing on consoles enjoy, even the Portal Master ranking, Arenas and new Kaos Doom Challenge.  In regards to the latter, as the story goes it was originally a combat simulator for training at Skylander Academy (your new in-game hub); however, Kaos took it over for himself, hence the name.  This is basically a simplified tower defence game mixed with the action combat of Skylanders.  It eases you into it and gets progressively harder as you make the way through each level.  My 8-year-old son, who as you can tell was my main test subject for this game, still loved this aspect on the tablet, and maybe even more so given his love for tablet based games as a whole.

When playing Trap Team it is up to you to make the game what it is.  Sure, you can power through the levels going from start to finish without doing anything else, but where is the fun in that?  Along with the new ‘trapping’ feature, the draw of Trap Team comes from searching for hidden items and looking around all the levels for new areas to explore.  You earn stars for how much you find and do as well.  Of course to experience everything, and find everything, you’ll need at least one Trap Master and one Trap of each element, and that can add up a bit, but remember, it’s not necessary to buy them right off the hop to enjoy the game.

You can also play Skystone Smash, a simple but yet addictive card game with strategy elements to it.  These can be found by finding certain characters in the levels or you can play it as a stand alone game from the menu.  There are also mini-games within some levels.  There are those akin to Angry Birds to games that are Rhythm Based, kind of like Guitar Hero but with your controller.  As with the console version I reviewed earlier, my son still enjoyed these mini-games as they added a break in the regular level exploration and they were fun. 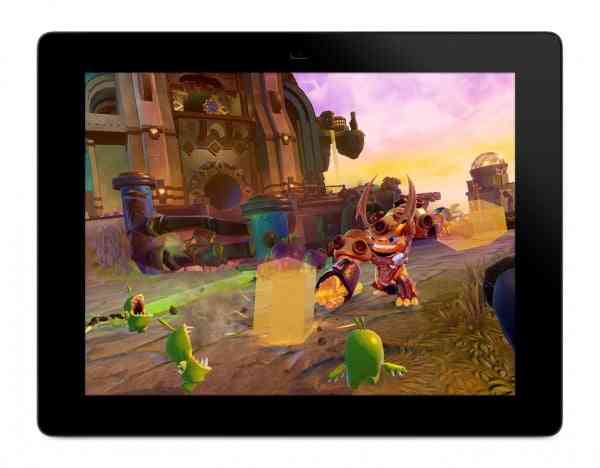 Interestingly enough, the fine folks at Vicarious Visions, the dev-team that made Swap Force, and who handle the tablet version of Trap Team, have put some great tech into the game.  First off they have considered storage limitations of a tablet.  The game loads level to level. This way parents don’t have to worry about the game taking up all the memory of the tablet.  Personally I think that is a great option and something VERY smart to implement.  Another cool feature are the control schemes.  If you want you can turn off the included controller, which runs on Bluetooth low energy, and pull the tablet out of the portal and use the virtual controls on the tablet screen. They work quite well. To add further portability, should you have to ‘hit the road’ and travel, you can play the game in “instant-on-the-go” mode.  Here the game puts two predetermined characters in the game level and you can play it in the car, on the bus, or on the plane. When you get to where you are going you can then sync back up with the portal and put your own skylanders in the game right where you left off.  It seems that they have thought of everything here.

Presentation wise, I was very impressed by what is offered. As noted this version of Trap Team was reviewed using an iPad Mini Retina, and boy it looks good.  I would equate the visual quality to that of an Xbox 360 or PS3 game.  I know, that is a lot, but seriously, it has the looks.  From the lighting, shadowing and textures of each level to the animation of all the characters, it’s a solid looking game.  As for the audio, it is on par with the console version too, with music that is reflective of the action on screen, great voice acting, and solid weapon and environmental sounds.  Put on a set of headphones and it immerses you even more.  I have to say that  Vicarious Visions have done an amazing job of putting Trap Team on a tablet, visuals and sound intact.

There is no doubt that Skylanders Trap Team for tablets is an amazing feat as there is little to no sacrifice.  The game looks good, sounds good, and most importantly, plays great.  Families with a tablet that supports Trap Team can’t go wrong as not only will it keep the kids busy, but they can enjoy a great game anywhere they go too.