The Dark Crystal: Age of Resistance Tactics Review – Resist If You Must

The Dark Crystal was made popular back in the 80’s when Jim Henson’s puppet and animatronic blended film made a lot of people really weird in an age of traumatizing children’s movies that were incredible. From the ongoing demand of nostalgia, Netflix invested in the beloved movie and brought a prequel series that follows the Gelflings fighting back against the nightmare fuel Skeksis. I have seen the original film many times (though not in a number of years) and I haven’t seen the Netflix series yet. So, heading into a tie-in game, you can understand that I thought I knew what I was in for. I was not. While the turn-based gameplay and RPG elements are in-depth enough to be interesting, this has literally nothing to do with Dark Crystal. Not only do I know nothing new about the series, I’m also confused about what, if anything, was the reason for licensing this game. It’s a very confusing though decently fun game that I’m not really sure who the target audience is.

The game is a traditional turn-based RPG, each character able to move a certain number of spaces and their abilities able to span a certain number of blocks with enemies having the same movement and attack movements. Your team continues to grow throughout the game as you move through different stages, collecting characters from the franchise as you go, each of them having different ‘jobs’ assigned. These are all completely interchangeable, though I didn’t try to do it too much. Changing a soldier to a scout which ups the characters movements and turns but lowers their strength seemed silly when I could just move their soldier status up to the max third tier and make them a tank. The options are there though and I’m sure it could make for a very interesting game strategy if you began stacking your classes to specific levels.

Which brings us to the level design. As the game goes on, it gets more and more intricate as you rely less and less on straight attacks and more on the special attacks you unlock. As the levels offer you new ways to defeat your enemies, whether it be strange creatures that attack, or an acid swamp, or what have you, you need to use different attacks in order for these map specific traps to help you defeat an enemy and finish the map requirements and move on to the next mission.

Though, completing the map requirements is much more difficult than it sounds. Sometimes that means a jaunty 5 minutes in a dungeon, sometimes it’s 20 minutes as your band of Gelflings move 6 spaces at a time while your enemies chase you and you try to get them in the right spot to push them into an acid swamp while also trying to open a door on the other side of the room. So, it can be frustrating. As I stated above, the job classes are cool as they are very interchangeable, but they don’t seem to serve much purpose in my books. The loot system doesn’t always drop an adequate amount of pearls either, so you’re struggling to equip your people, right up until you finally get everyone fully loaded and then the pearls start accumulating. There’s always a higher tier armour or weapon, but by the time you actually get to them, you’re already manhandling enemies, so it’s just gratuitous at that point.

I can’t reiterate enough that I have no idea who this game is aimed at. I had no idea what was happening story-wise because I hadn’t seen the series and it had been time since I watched the movie. Is there enough to do to entice fans? Since you can just turn your characters into any class of fighter, I wonder. There were scenes that I felt for sure were pulled right from the show but the way I went about winning the stage was more than likely how it went down in the show. So again, it’s not for the uninitiated but I don’t think it’s for hardcore fans either. Turn-based RPG’s are also a pretty niche genre, so that adds another layer to my confusion. 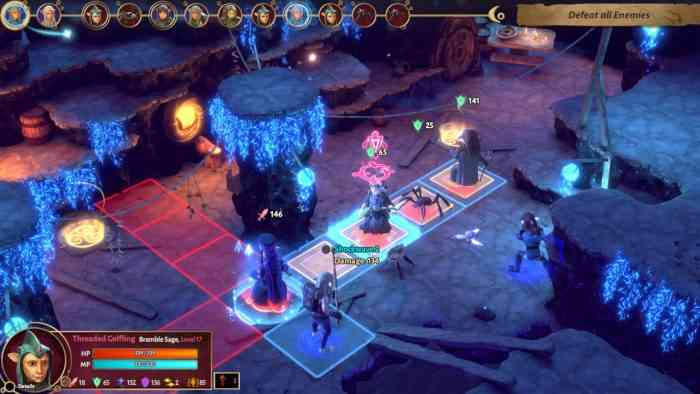 Regardless of who it’s for, ultimately The Dark Crystal: Age of Resistance falls somewhat flat. While I enjoyed aspects of it, those same things would frustrate me to no end in different maps. It’s a tie-in game that doesn’t give enough information to pull me in, though I feel it gives precious little new stuff to fans to entice them. When it comes down to it, I don’t really understand who this game is for because I can’t tell fans they’d love it and I can’t tell the uninitiated to pick it up because the story is baffling, and the gameplay isn’t great. So, even though there are aspects of the game that are solid, this one gets a hard pass from me. Hopefully, I have fewer nightmares about this game than I did about the Skeksis for pretty much my entire childhood.

***A PS4 review code was provided by the publisher ***