I’ll admit that The Crew 2 is the first racing game I’ve picked up in a long time. As such, I wanted a game to get truly excited about, like in the days of Burnout Revenge and Need for Speed: Hot Pursuit. After the big announcement of the sequel at E3 last year, this has been the racing game on my mind. So how does it perform? Let’s dive into it.

The Crew 2 brings the world of racing to the wide open, though condensed, spaces of the continental USA. This sequel takes a much more lighthearted approach to the world of racing than the original title ever did. Gone is the story of revenge, replaced instead with the dream of becoming a huge star in the world of racing. You’ll play as a nobody racer who dreams of fame and fortune. In order to become one of the greats, an icon, you’ll need to win races and pull off some sweet stunts. And since it’s 2018 and we live in a world dominated by social media, the progression system for The Crew 2 is, as you may have guessed, based on the number of followers you have.

As you compete in events, skills, and side activities you’ll earn more followers and in turn, you’ll rank up. You’ll begin at rookie, moving your way past popular, famous, and star to eventually become an icon. Unless you’re really into earning a ton of followers in real life this isn’t exactly the most exciting story to play through. With that said, the openness of the story, gives you the freedom to do what you want, when you want, wherever you want. You can drive across the United States, taking in the sights and finding new events as you go or you can fast travel between them. Though it is a relatively linear story, you can take as long as you want to increase your status, without someone nagging you to progress and that’s a nice bit of freedom to have.

Nevertheless, there are only so many events to take part in right from the get-go. Once you’ve worked your way up the ranks however you’re able to unlock some more game modes. Be warned though, as new ways to compete mean a whole lot more money. Instead of being able to use your street car for drift events for example, you have to buy a whole new vehicle. The more bucks you have, the better the car you can buy. This is the same across the board. As you move from anonymous to icon you will always need more money. Of course, as you unlock and complete more events you’ll also earn parts and bucks, the in-game currency, that will increase your vehicle’s stats. By the time you’ve made your way up to icon, you’ll be relatively unstoppable.

Not only is the list of vehicles to explore the map with extensive, but there is a large variety of ways to customize all of them. While more customization options are available for all of the cars, there are still enough options for both the planes and boats to keep it interesting. From paint jobs, to changing the outer shell of your cars and even getting to trick out the interior in a few different ways, this feels like an incentive to keep playing and unlocking more badass vehicles. Though you may not start off with a Ferrari or Lamborghini, you can definitely buy one at the end and customize the hell out of it. 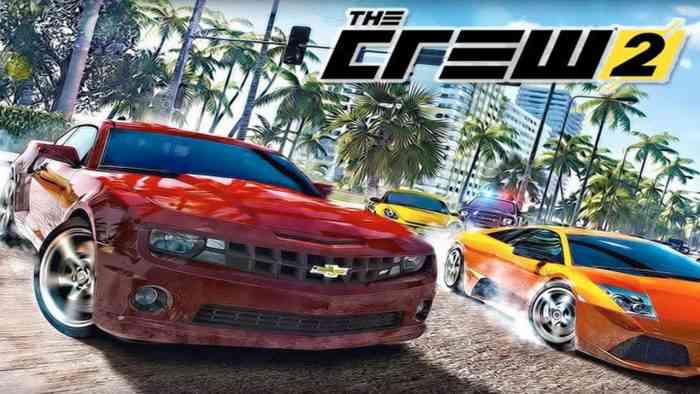 Now the best part about The Crew 2 is the overall driving experience. Once you get past the steep learning curve of one of the new additions, the airplanes, you’ll be excited for any chance you get to take your plane out for a spin. After all, it’s more than a little enjoyable to do barrel rolls and 360-degree loops in the air all while in complete control of your vehicle. As for the boats, these control so much easier and can be just as fun to mess around in as the planes. The cars are by far the easiest to control, with tight handling, though they also vary in difficulty. If you make sure to look at this before purchasing them, you should be fine. You can interchange these vehicles with the click of the analog stick, going into a downward free fall from a plane to a car, but hey that’s part of the beauty here. Though The Crew 2 seems to suffer from a bit of an identity crisis, as it’s part simulation, part arcade racer, and part extreme sports, it will nonetheless have you smiling as you leisurely whip around the USA.

Just don’t let the leisurely driving experience fool you into thinking that racing will be a breeze, because that can’t be farther from the truth. As soon as it’s time to get down to business The Crew 2 can become a lot more frustrating. From inconsistent map textures and things causing you to get stuck from one track to another, you better have patience in abundance. Oh, and when given the option to go off track in any race, don’t take the bait. Unless of course, you like swearing a lot as you get knocked back from first place all the way back to last place. Let me explain, more often than not the tracks you race on have checkpoints to hit along the way and if you miss one, the ensuing ones don’t populate. As a result, you’ll get so far behind there’s no point in even trying to win. To add to this frustration, the AI are usually so good that it doesn’t even matter how well you drive, because if you make one small mistake, last place is often the best you can hope for. I could see this happening if the AI were hot on your trail however when you’re 20 seconds ahead there’s no way in hell anyone should catch up, let alone pass you.

Multiplayer Is but a Myth

If you imagined The Crew 2 setting the stage with grandeur multiplayer matches, think again. In fact, you’d better just erase the very idea that multiplayer even exists in this game. Sure, you can play alongside your best friends, completing races and challenges together, which makes the game a bit easier, however, there is absolutely no competitive multiplayer to be found. Ubisoft has stated that there won’t be any competitive matches until the end of this year. This seems like the very definition of a missed opportunity and sure it may be only a few months away but can someone please tell me why we should have to wait so long for something that should already be included at launch?

For everything The Crew 2 does wrong, they really nail the way the vehicles look and sound. As I mentioned earlier, the vehicles can be tricked out in a variety of ways, making them even more visually appealing. From matte and chrome finishes to iridescent paint jobs and full body customization, the boats, planes, and cars all look pretty sweet. To top it off, each of the vehicles have a distinct hum and thrum of their engines and as you kick them into high gear with nitro boosts, it’s hard not to be impressed with this. Muscle cars sound quite different than imports, and both the speedboats and planes have their own distinct sounds as well. Save for the horrible voice acting which will have you keen on skipping each and every cutscene, the game does sound pretty great. It’s disappointing then, that the effort Ivory Tower put into each one of their vehicles just doesn’t translate into the rest of the game. While the map looks great, the world is devoid of personality and as you travel from city to city, there isn’t a whole lot that changes. Everything just seems so blah and that’s never a good thing.

There’s no denying that at its core this game is good, however, the problem lies in the fact that it’s just so damn unpolished. It seems the developers tried to pack too much into the game, and while it feels strongest as an arcade racer, Ivory Tower could have trimmed the fat and made the game so much better. Maybe sometime next year The Crew 2 will start to feel like the sequel we all deserve, but as it stands right now, it certainly doesn’t.